As long as the government has had competitive procurement, one rule has stood firm. If a bid comes in late, tough luck for that bidder. But the rule got harder to interpret when email replaced hand delivered envelopes or faxes. What if a server crashed? What if a bid got stopped by a spam filter? Now a...

As long as the government has had competitive procurement, one rule has stood firm. If a bid comes in late, tough luck for that bidder. But the rule got harder to interpret when email replaced hand delivered envelopes or faxes. What if a server crashed? What if a bid got stopped by a spam filter? Now a new case has muddied the rule further. The Federal Drive with Tom Temin  talked to Smith Pachter McWhorter procurement attorney Zach Prince.

Tom Temin:  And let’s begin with the rule itself. I mean, this goes back to the founding, probably back to the Competition and Contracting Act. But how has email affected the rule? Because email has  had a lot of cases, hasn’t it?

Zach Prince:  It has. So the general rule is late is late. And you get your proposal in even a second late, the agency is not going to consider it. There are exceptions to that, more so at the Court of Federal Claims, and there are GAO. But the FAR has three exceptions stated. First, it’s got an exception, specifically for an email, is if you get an email into the government by 5pm, one business day before the proposals are due, then the agency could consider it if it determines that it’s not going to unduly delay the procurement process. The second is the government control exception is if you get it in on time to the government installation, and it’s in the agency’s control, then the agency can consider it. And the third is, if there just aren’t any other proposals, it’s the only thing the government received.

Tom Temin: Got it. So the 5pm the day before is that to take into account the problems that can happen with email systems?

Zach Prince: It is and this can be really frustrating for any offerors, because you get a proposal in and it’s somewhat of a black box, you might not get a read receipt, you might get something saying that the government server has received it. But that doesn’t tell you the agency has actually gotten your email. And then by the time the agency gets around to telling you they have not seen your proposal, you might be too late.

Tom Temin: Right. And the FAR clause, you mentioned that the agency may consider these things under those three exceptions. But that doesn’t compel the agency to accept those bids, even if it is a day early by 5pm. And somehow they didn’t get the rise on it?

Zach Prince: That’s right, the agency still has discretion to decide that they don’t want to consider it, it’s going to slow down the process too much. It likely depends on when the agency learns that this proposal was in their hands and they didn’t see it.

Tom Temin: In other words, it could be in by the server’s clock on time. But if nobody sees it for a month, because it got overlooked, and they’ve already read all the other evaluations, they could say too bad. That’s exactly right. I mean, that does sound like just pure bureaucracy, though, doesn’t it?

Zach Prince: It is, but the government does have an interest in getting procurements completed and getting the things they need on time.

Tom Temin: Because in the old days, if something was delivered and accidentally got into a trash bin, you know, the government would still have to have considered it because it was there physically on time, there used to be big envelopes. Sometimes it was a box of material of physical paper. So email is exceptional, then. And let’s go into this current case, a company called eSimplicity, what happened in this particular case?

Zach Prince: So with eSimplicity, they got their proposal in on time by email, and they got a notification that the server had received it, but they didn’t get a read receipt. So they followed up with the agency. And they asked, please confirm that you received their proposal. The agency, by the time they got around to responding said no, we haven’t. And we’re gonna award to somebody else, you guys aren’t in consideration. The agency did an investigation and determined that the proposal was rejected because of size limitations with email. The problem was that the solicitation didn’t actually contain a size limitation.

Zach Prince: I’ve seen some solicitations now that do have file size limitations, and they probably ought to, particularly in light of this decision.

Tom Temin: Right and quick question who was buying what from whom?

Zach Prince: The Navy was buying some sort of technical services in support of electromagnetic spectrum equipment, I assume. The government doesn’t really elaborate on it in this decision.

Tom Temin: Got it. We’re speaking with Zach Prince. He’s a procurement attorney with Smith, Pachter McWhorter. All right, so the company eSimplicity then appealed the agency’s decision to which venue?

Zach Prince: They brought it to the Court of Federal Claims. And what happened. The court ultimately decided in favor of eSimplicity, and they did that on two grounds. The first was a pretty creative one. The court determined that the size limitation was an unstated evaluation criteria, which was a pretty interesting way to approach this and I think it was a reasonable way to approach it. The solicitation easily could have said the size limitation is 35 megabytes. Everyone knows that an email server has some limitation but what that is varies significantly by server and And because the agency didn’t put this in here, and they rejected the proposal automatically based on that criteria, the court found that was an unstated valuation criteria and remanded to the agency on that basis.

Tom Temin: And then what happened?

Zach Prince: Well, the second basis for the court’s decision was this assessment of the second exception to the latest late rule. And that is whether the government control exception applies to email. And it’s an interesting issue, because the FAR has those two exceptions, one specifically for email. And then one generically stated, as you know, when something is at the government installation, and in the government’s control by the time of the proposal due date. Then the government could consider it. The court has been split for quite a while on whether that also could apply to email. The plain language suggests that it can and that’s what the court bases it on, you know, playing devil’s advocate, and this is the reason other judges haven’t found that. The first exception is specifically for email, and requires you to get it in by 5pm. one business day before. So it begs the question, if the second exception is also for email, why have a separate exception, but in any case, the court found that it applied and remanded the agency on that basis, also.

Tom Temin: So we don’t know what the agency has decided to do yet, though, do we?

Zach Prince: We don’t. And this is an interesting trend at the court recently, they’ve been remanding issues to the agency to make decisions consistent with the court’s reasoning, rather than just telling the agency you must do X, they’re saying, This is what we’ve decided about the legal framework. Agency, issue a decision consistent with this. And then if there’s a problem, it’ll come back to the court.

Zach Prince: That’s right. And it’s an interesting issue, because, you know, the government is millions of people. Your government sometimes tries to defend against poor conduct on that basis. But the reality of the private sector, it is one entity. The government’s in a tricky position, because it needs to evaluate proposals within a timely fashion and get its business done. But the contractors can’t be prejudiced as a result. So they’re competing interest here.

Tom Temin: So the court can’t then order the agency to go ahead and read that proposal. But you said that if they don’t, then the plaintiff, the company, eSimplicity, could get them back into court for that next step.

Zach Prince: Yeah, it’s hard to see here how the agency avoids considering this proposal. Because the first basis for the decision that is the unstated evaluation criteria, it’s pretty strong. For the agency to go and say, “Yeah, this was an unstated valuation criteria, as the court told us, but we’re still not going to consider it,” would take some guts. And I don’t know how they defend it.

Tom Temin: Interesting. Well watch the sizes of the files you send. In any case, I guess it’s not a bad idea. You ever notice, sometimes you send a PDF, and it’s five megabytes. And sometimes you send a PDF, and it’s 672 kilobytes. And I’ve never been able to figure out why a picture can be big or small. It seems like the server makes that decision for you. I don’t know. But that’s something to keep in mind. Zach Prince is a procurement attorney with Smith, Pachter McWhorter. 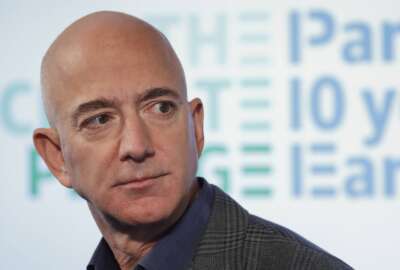 Bezos’ legal team protests federal contracts like no other