In the next couple of weeks or so, the Government Accountability Office will release its annual report to Congress on bid protests for the past fiscal year. At that point, we will continue the discussion about whether vendors are protesting more contracts each year or whether it just feels that way.

No matter what the statistics from GAO tell us — for instance, in 2014 the number of bid protests grew by 5 percent — the perception among many is contractor challenges to agency award decisions are not only expected, but planned for at an alarming rate. If you ask almost any contracting officer or program manager running a major acquisition, they build an extra 100 days into their schedule for the bid protest.

There is a way to fix this growing problem — again, whether real or perceived, it is a problem. And unfortunately for the government and industry, it’s a problem despite two “mythbuster” memos from OFPP emphasizing and encouraging more agency-vendor communication.

Rob Burton, a former deputy administrator at the Office of Federal Procurement Policy and now a partner with the law firm Venable, said over the seven years since he’s left government, he’s been shocked by the lack of transparency and discussions about why an agency made a contract award decision.

“Many of the debriefings agencies offer are very superficial,” Burton said. “Having a government attorney sitting in the debriefing and monitoring to make sure the contracting officer or program manager doesn’t say something inappropriate has a chilling effect on the debriefing. Until the government engages with industry in a robust way and has actual communications — a two-way dialogue — industry will continue to protest awards and that’s going to hold up the project.”

Burton said there are two major problems with how the government provides debriefings.

The first is they don’t, specifically under task orders awarded through the General Services Administration’s schedule contracts, have to provide a debriefing.

Burton said under the Federal Acquisition Regulations — section 8.4 405-3 (b)(3) for those keeping score at home — agencies are only required to provide a “brief explanation” to the losing bidders.

The language in the FAR: “If an unsuccessful offeror requests information on an award that was based on factors other than price alone, a brief explanation of the basis for the award decision shall be provided.”

With more than $32 billion going through the schedules in 2014 including $14 billion on the IT schedule alone, and a significant increase expected in 2015 across the board, Burton said the need for more constructive and substantial debriefings is clear.

Burton said he understands potentially requiring a debriefing for every award over $150,000 could be hugely time consuming on the government — and especially as a lawyer getting paid by the hour — it would be burdensome on the vendors too.

“I do think the time the government takes to give full debriefings and allows for back and forth will actually result in fewer bid protests,” he said. “I’m convinced of it. The government has nothing to hide, and usually has a reason for its selection and it’s well supported. But for whatever reason the government doesn’t want to communicate it, and forces vendors to protest to get a full disclosure so the vendor can see why they lost.”

The second problem with debriefings is agencies aren’t required to do them in person. The FAR says a written debriefing is fine.

Burton said too often agencies will quote the FAR, saying they are giving the vendor what is required of them by policy.

That minimally acceptable effort talks to a larger problem in the acquisition community of fear of getting into trouble and a lack of top-cover support from management.

“Clients are much less likely to protest after receiving an oral debriefing,” he said. “The amount of time and expense putting together a response to a RFP is mind boggling, and to get a one or two liner explaining why you didn’t receive the award really rubs contractors the wrong way. Industry feels it deserves more of analysis after putting efforts in it, and will file a protest to get that type of information.”

Burton said there are some innovations going on within some agencies that have convinced him that more communications would reduce the number of bid protests — again real or perceived.

He said one agency attorney brought him in to look at contract award file and to have a discussion.

“I told my client afterwards not to file the bid protest because they would lose,” Burton said. “That robust communication reduces bid protests in government and it’s absolutely a best practice.”

Burton said one way or another the government will end up providing the information, so providing it before a bid protest is filed will ultimately save time and money for all parties.

Now to be clear, the impetus doesn’t fall totally on the government. Industry also is hesitant to be fully open.

Harrison Smith, the Homeland Security Department’s industry liaison, said the agency has been trying to communicate more with vendors through events such as a reverse industry day.

Smith said DHS asked 11 companies to provide redacted versions of the debriefings the agency gave them as part an effort to improve those meetings.

Smith said in the end, only two vendors participated.

“We had a lot of people come back to us and say we wouldn’t believe the internal conversations we had with our internal counsel about participating,” Smith said. “It would help us to understand how companies make their decisions too.”

Burton said he recommends OFPP changes policy or the FAR Council opens a case to require oral debriefing for all contracts worth more than $150,000 if the vendor asks for it.

Also in the Reporter's Notebook 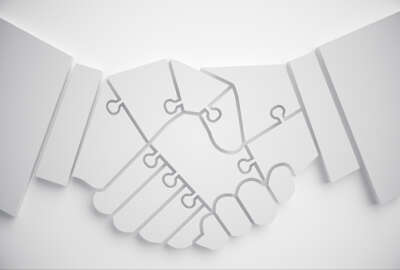