Looking back on a year of severe hurricanes and wildfires, the General Services Administration wants to know how it can best prepare its federal building portfolio against natural disaster trends.

In January, the National Oceanic and Atmospheric Administration found that hurricanes like Harvey, Irma and Maria, along with devastating wildfires on the West Coast, made 2017 the most expensive year of disaster recovery for the United States, with an estimated $306 billion in damages.

Last year, the Government Accountability Office sounded the alarm and added climate change to its High-Risk List of threats to the federal government. More recently, the Defense Department determined that more than a thousand military installations could be vulnerable to natural disasters caused by climate change.

In a meeting of the Office of Federal High-Performance Buildings advisory committee Monday, Ann Kosmal, a climate response architect at GSA, said the agency is working to make its federal real estate portfolio as resilient as possible against natural disasters in the future.

“The biggest question for GSA often is, how do we look to integrate the latest actionable science to inform prudent federal investment, and to manage risk over the service life of the assets that are owned and operated by this agency,” Kosmal said.

Some challenges, she added, include incorporating cutting-edge developments in climate science into an agency like GSA, which builds and operates facilities with a 50-to-75-year timeline in mind, at a minimum.

What’s more, she said the federal government could, in the future, be held legally accountable for not making its federal real estate holdings more adaptable to climate change threats.

“The reality is that attribution science, as it becomes more robust, can be used in the legal sector, and there are duties in the legal arena that then may apply, if you have responsibilities for physical infrastructure or disaster management, or you need to protect people or assets or components or the environment,” Kosmal said.

During his administration, former President Barack Obama signed several executive orders, aimed at shoring up the federal government’s readiness to climate change, that have been overturned by the Trump administration.

“All of this has to go back to what statute does this support. In our case now, because many executive orders have been rescinded on these topics, it is really about how do these activities safeguard assets … With these efforts, and other agencies that also have to manage these risks, we will potentially even have audits on these topics,” Kosmal said.

Going forward, Kosmal said GSA is releasing requests for proposals (RFPs) for contracts that are more explicit in their requirements for environmental sustainability.

“We want to get to the sweet spot [with] the mission of the customer and occupant, the expected changes in climate and the budget … so that we avoid obsolescence,” she said.

Looking ahead, GSA is also looking at reducing its fossil fuel footprint by developing more net-zero facilities powered by renewable, zero-emission energy sources. Its NetZero Energy challenge aims to have all federal buildings reduce their fossil fuel-generated energy use to zero by 2030.

“While this is a very small segment of the building industry, we see this trend really emerging,” NBI Chief Executive Office Ralph DiNola said Monday. 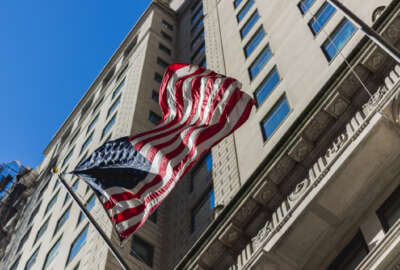