A federal appeals court has called on the Postal Regulatory Commission to rethink the formula it uses to determine whether the Postal Service’s competitive package business generates enough revenue to justify its costs.

The D.C. District Court of Appeals, in its ruling Tuesday, determined that the postal regulator’s most recent formula used to calculate the “appropriate share” of revenue needed to cover operational costs “fails to articulate a comprehensible standard.”

“The bottom line is that...

A federal appeals court has called on the Postal Regulatory Commission to rethink the formula it uses to determine whether the Postal Service’s competitive package business generates enough revenue to justify its costs.

The D.C. District Court of Appeals, in its ruling Tuesday, determined that the postal regulator’s most recent formula used to calculate the “appropriate share” of revenue needed to cover operational costs “fails to articulate a comprehensible standard.”

“The bottom line is that the Commission’s Order is arbitrary and capricious because it is ‘largely incomprehensible’ with respect to the matters in issue,” the three-judge panel wrote in their decision.

The ruling gives the Postal Service and its regulator more to consider about its future business model, as USPS warns Congress that the coronavirus pandemic has triggered a steep decline in mail the agency “may never fully recover” from.

To avoid running out of cash before the end of the fiscal year, the Postal Service has requested $50 billion in emergency funding in the next emergency spending bill, as well as another $25 billion line of credit from the Treasury Department.

The PRC in January 2019 approved a final rule that would require the Postal Service’s competitive products to cover 8.8% of the agency’s institutional costs, more than a 3% increase, and would have the regulator recalculate that rate annually.

While USPS has a price cap on first-class mail, its most profitable product, the agency has more pricing flexibility for its package products, as long as its monopoly mail business doesn’t subsidize its package business, which competes with private-sector shipping companies.

“The formula calculates the year-over-year change in the capacity of competitive products to collectively generate contribution to institutional costs, based on the Postal Service’s market power and market position,” the PRC wrote in its announcement.

However, the United Parcel Service argued before the appeals court in January that the PRC’s formula for competitive products didn’t factor in “the degree to which any costs are uniquely or disproportionately associated with any competitive products.”

The PRC, however, told the court “there are no costs uniquely or disproportionately associated with competitive products that are not already attributed to those products under the Commission’s current cost attribution methodology.”

The USPS Office of Inspector General has looked at breaking down the agency’s cost-by-product several times, including in a 2014 white paper. That report stated that a more “modern, bottom-up costing and revenue analysis system” would allow the Postal Service to make more informed business decisions.

Paul Steidler, a senior fellow at the Lexington Institute, in a Capitol Hill forum last month, agreed that a more modern costing system would “provide Postal Service executives with common and accepted views of costs and profitability” at it finalizes a 10-year business plan.

“One of the key challenges inherent to reform is drilling down on costs, that is understanding what the costs are for different product lines for the Postal Service,” Steidler said.

The ruling comes a week after President Donald Trump said the Postal Service “could make money or break even” if it increased its package and shipping rates.

However, the Package Coalition, which advocates for e-commerce companies, argued that the Postal Service’s package revenue “far exceeds” its operation costs.

“Far from requiring a subsidy, the Postal Service’s package delivery business is in fact helping to support institutional costs, including mail delivery,” the coalition said in a statement.

Meanwhile, PRC Chairman Robert Taub has repeatedly urged Congress to revisit and redefine the Postal Service’s universal service obligation, or its statutory requirement to deliver mail to every address in the country six days a week.

“What do each of us, as American citizens, need from the Postal Service as a government service and what is the cost? Without greater mission clarity our Postal Service, its employees, its customers, indeed all Americans who depend upon this national treasure will be set up for frustration,” Taub said at the Lexington Institute forum last month.

The Postal Service’s financial woes began long before mail declines from the current pandemic. The agency has ended the past 13 years with net financial losses.

A 2006 mandate to pre-fund retiree health benefits for postal retirees accounts for a significant portion of its losses.

The Government Accountability Office estimates USPS has defaulted on more than $48 billion in payments to that fund, which will run out of money by 2030.

However, GAO finds that USPS’ total unfunded liabilities and debt — about $143 billion in 2018 — has grown to double the agency’s annual revenue. 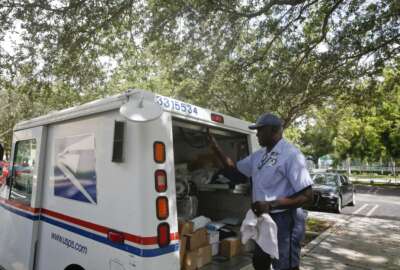