Democrats on the House Oversight and Reform Committee are moving ahead on their latest package of postal reform legislation and picking up bipartisan support in the process.

The committee will markup the 2021 Postal Service Reform Act in a meeting this Thursday.  Committee Chairwoman Carolyn Maloney (D-N.Y.) previewed her bill as a “discussion draft” at a hearing in February, and got Postmaster General Louis DeJoy’s feedback on some of its key points.

Maloney, along with Ranking Member James Comer (R-Ky.), introduced the final text of the bill Tuesday afternoon, ahead of Thursday’s markup meeting.

The bill would eliminate the agency’s 2006 mandate to fund retiree health benefits well into the future, a significant cost for USPS, at least on paper. The agency has defaulted on billions of dollars in annual payments to the retiree health fund.

The legislation would require postal employees to enroll in Medicare when they turn 65. The bill wouldn’t require current retirees to enroll, but would give them a three-month grace period from late-enrollment penalties if they opt to do so.

DeJoy told lawmakers he supported the legislation at the February committee hearing. The 10-year reform plan he unveiled in March projects this legislation would save USPS $58 billion over the next 10 years, and correct the agency’s long-term financial problems by 2030.

Comer said the bill, combined with the 10-year plan, “will help put USPS on the road to fiscal stability, make it more efficient and sustainable for generations, and ensure continued service to the American people.”

The bill would also require USPS to stand up an online, publicly available dashboard to track service performance. Maloney said the bill adds “transparency to ensure the Postal Service provides the high quality of service Americans expect and deserve.”

USPS Chief Technology Officer Scott Bombaugh said at last  Friday’s Board of Governors meeting that the agency delivered 78.13% of first-class mail on time in the second quarter, compared to 92.18% for the same period last year. The average delivery time for a first-class piece of mail was 2.9 days in the second quarter, compared to 2.3 days last year.

The Coalition for a 21st Century Postal Service, which represents e-commerce businesses like Amazon and eBay, as well as trade associations and industry groups that rely on USPS to do business, also supports the bill.

The coalition’s executive director, Art Sackler, urged lawmakers to go a step further by blocking mail rate increases USPS says are imminent and its plans to relax service standards for the 30% of mail that travels the furthest in its network. Sackler said these changes would disproportionately affect rural areas.

“By raising prices dramatically on mail and institutionalizing service downgrades, the new 10-year plan — if left unchecked — will hurt large and small businesses, nonprofits, charities, and consumers, as well as the future of the Postal Service,” Sackler said.

USPS, as part of its 10-year plan, is seeking a positive advisory opinion from the PRC to still deliver 70% of first-class mail within three days, but deliver the remaining 30% in four to five days.

“With further attention from Congress, this legislation can help guarantee affordable, reliable mail and shipping options for recovering businesses large and small, and more importantly, preserve a lifeline for millions of Americans, especially those living in rural areas,” Sackler said.

The committee on Thursday will also markup Postal Service Improvement Act, which would require all mail-in ballots to include a trackable barcode and other design features that would make it easier for postal employees to sort and track mail-in ballots.

Meanwhile, a coalition of more than 50 House Democrats is offering $8 billion to USPS to make electric vehicles at least 75% of its new fleet.

USPS, after awarding its next-generation vehicle contact to Oshkosh Defense in February, told Congress electric vehicles would make up at least 10% of its new fleet, but cited the extra infrastructure costs.

“The Postal Service simply cannot afford to lock in another 25 years of reliance on primarily fossil fuel delivery vehicles—to do so would be shortsighted and fiscally disastrous for the already struggling agency,” noting its $69 billion in net losses over the past 10 years,” lawmakers wrote.

Huffman, a member of the House Transportation and Infrastructure Committee, introduced the Postal Vehicle Modernization Act in March, which would give USPS $6 billion to replace more of its decades-old Grumman Long Life Vehicles with electric or zero-emission delivery trucks. 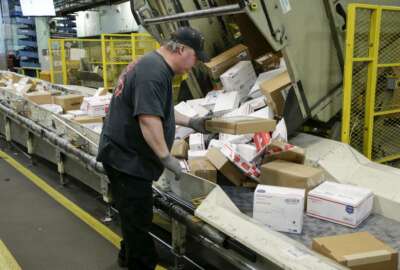