The Postal Service is moving ahead with a non-voluntary reduction in force of non-bargaining unit employees after sending voluntary early retirement offers to its eligible management workforce.

Ahead of the layoffs and reassignments, USPS will send a second round of Voluntary Early Retirement offers to eligible employees working at its headquarters, headquarters-related facilities, area offices and district offices.

The agency, meanwhile, is lifting a hiring freeze that’s been in place since last summer and will post job offers “to facilitate placement opportunities for impacted employees,” according to a memo obtained by Federal News Network.

Chief Human Resources Officer Doug Tulino said in the memo that USPS will walk employees through the details of its final organizational structure and staffing in a series of town-hall meetings it will hold the week of May 17.

“Managers should schedule follow-up discussion with individuals impacted by the changes,” Tulino wrote, adding that his office would provide additional information to assist with these sessions.

Employees affected by the RIF will receive a Specific RIF Notice (SRN) in the mail and via email on May 21. The SRN will outline employees’ prospects for reassignment or demotion, or next steps in their separation from the agency.

Employees affected by the RIF must separate from the agency on Oct. 8, but employees who accept a reassignment or demotion will start their new positions Oct. 9.

Eligible employees will receive their second voluntary early retirement offer this Friday, and must decide whether to take the offer no later than July 16. Employees who do take the offer must leave the agency effective July 30.

The second-round voluntary early retirement offers won’t come with any monetary incentive. Eligible employees will receive their VER offers in the mail and via email.

While USPS billed its first round of early retirement offers as part of its “reduction-in-force avoidance activities,” Postmaster General Louis DeJoy told Federal News Network last month that USPS didn’t have immediate plans to conduct a RIF, but didn’t rule it out either.

“We’re going to use every tool in our toolbox to create a viable entity that serves the American people, so nothing is ever off the table. But at this time, that’s not anything that I’m particularly focused on,” DeJoy said during the April 5 interview.

National Association of Postal Supervisors (NAPS) President Brian Wagner said last month USPS had notified employees of their eligibility for a second round of voluntary early retirements in mid-March, if the agency decided to go ahead with a RIF.

Wagner also said USPS, by lifting the hiring freeze, would create “landing spots” that would give RIF-ed employees a shot at another agency job instead of a layoff.

USPS lifted its hiring freeze on management positions Monday, and will start posting new job listings for management-level positions on May 25.

These jobs will include openings at USPS headquarters, area and district offices, as well as customer service field positions and mail-and-package processing plants on a “case-by-case basis.”

In phase one of the restructuring, announced last August, DeJoy reshuffled USPS executives and realigned the agency to focus on three lines of effort — retail and delivery operations, logistics and processing, and commerce and business solutions.

This March, in rolling out phase two, USPS announced its first wave of early retirement offers and its plans to consolidate its 67 districts into 50 districts that more closely align with state boundaries. 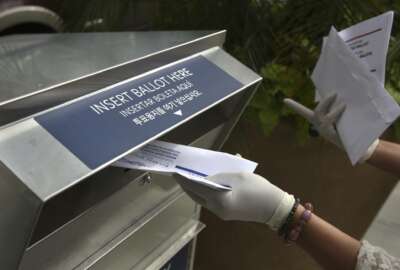