The Postal Service has put a management hiring freeze in place and will soon accept early retirements from non-union postal employees as part of a reorganization the agency announced Friday.

USPS said these changes won’t lead to a reduction in force, and that “there are no immediate impacts to USPS employees,” but the agency will request Voluntary Early Retirement Authority from the Office of Personnel Management for employees not represented by a collective bargaining agreement.

The Postal Service has put a management hiring freeze in place and will soon accept early retirements from non-union postal employees as part of a reorganization the agency announced Friday.

USPS said these changes won’t lead to a reduction in force, and that “there are no immediate impacts to USPS employees,” but the agency will request Voluntary Early Retirement Authority from the Office of Personnel Management for employees not represented by a collective bargaining agreement.

Several postal unions represent the vast majority of the Postal Service’s workforce of more than 600,000 employees, but about 50,000 employees aren’t covered by a collective bargaining agreement.

Postmaster General Louis DeJoy has also reshuffled USPS executives and restructured the agency to focus on three lines of effort — retail and delivery operations, logistics and processing, and commerce and business solutions.

DeJoy said these changes focus on operational efficiencies that will allow the agency to “reduce our cost base and capture new revenue.”

“It is crucial that we do what is within our control to help us successfully complete our mission to serve the American people and, through the universal service obligation, bind our nation together by maintaining and operating our unique, vital and resilient infrastructure,” he said.

DeJoy has agreed to testify before the House Oversight and Reform Committee next month about operational changes at the Postal Service. Meanwhile, committee Chairwoman Carolyn Maloney (D-N.Y.) has expressed concerns with the agency’s reorganization plans.

“The middle of a once-in-a-century pandemic with a national election around the corner is not the time to institute a major reorganization of the Postal Service. This comes on top of the operational changes that are already causing severe mail delays across the country,” Maloney said.

The Postal Service, weathering long-term financial challenges made worse by the coronavirus pandemic, is also preparing for a record volume of mail-in ballots this November while also streamlining its operations to cut costs.

DeJoy, speaking Friday before a virtual meeting of the USPS Board of Governors, called on Congress and the Postal Regulatory Commission to put USPS on a long-term path to financial recovery, but said the agency will continue to address “ingrained inefficiencies” in its operations.

“We will not and cannot wait for the legislative and regulatory process to save us. The Postal Service must do our part by pursuing every strategy within our control to ensure our success,” DeJoy said.

Since taking office in June, DeJoy has introduced operational changes to cut transportation and overtime costs that in some cases have led to temporary mail delays. However, he said the agency should continue to embrace six-day mail and package delivery as “one of the organization’s greatest strengths.”

“By running our operations on-time, on-schedule and by not incurring unnecessary overtime or other costs, we will enhance our ability to be sustainable and to be able to continue to provide high-quality, affordable service,” he said.

The Postal Service ended the third quarter of fiscal 2020 with a $2.2 billion net loss, the same loss it reported for the same period last year.

Less than three months out from Election Day, USPS election mail coordinators have met with state and local election officials to discuss the timeline officials should set to ensure all ballots are received and submitted on-time.

Robert “Mike” Duncan, chairman of the USPS Board of Governors, said the Postal Service has developed election-related mail labeling for greater visibility and has encouraged election officials to use intelligent barcodes that track the delivery of election mail.

“It should be clear that the Postal Service is doing everything in its power to help the states and localities be ready for this election,” Duncan said.

DeJoy said the Postal Service has “ample capacity to deliver all election mail securely and on-time,” but warned that the agency can’t make up for errors or delays if election boards don’t take its normal processing and delivery standards into account.

“We have delivery standards that have been in place for many years. These standards have not changed, and despite any assertions to the contrary, we are not slowing down election mail or any other mail,” DeJoy said.

Paul Steidler, a senior fellow at the Lexington Institute, said the Postal Service has established “clear guidelines” for election boards, political parties and others who are facilitating vote by mail.

“If things go wrong, it is not likely to be the Postal Service’s fault. Postmaster DeJoy will be vigorous in holding the responsible parties accountable, just as many are holding accountable,” Steidler said.

DeJoy also walked back concerns that the Trump administration seeks to privatize the Postal Service, as it proposed in a 2018 government reorganization strategy.

“I was not appointed by the governors to position the Postal Service to be privatized or to manage its decline. To the contrary, I accepted the job of postmaster general fully committed to the role of the Postal Service as an integral part of the United States government, providing all Americans with universal and open access to our unrivaled processing and delivery network,” he said.

While the Postal Service expects to have enough cash on hand to operate through August 2021, DeJoy warned that the agency’s financial position remains dire, and without “dramatic change,” the agency still faces a long-term liquidity crisis.

The Postal Service has reported more than a decade of net financial losses, and is projected to end this year with $11 billion in losses.

DeJoy has called on Congress to reconsider a 2006 mandate to pre-fund retiree health benefits that has led to USPS defaulting on billions of dollars in payments in recent years. He also urged the Postal Regulatory Commission to complete its 10-year review of the agency’s rate-setting.

Nearly three years ago, the PRC determined that the current USPS rate-setting system didn’t meet all statutory requirements needed to keep the agency financially healthy, but the PRC has not yet provided a replacement model that would address these issues.

Had Congress and the PRC provided long-term reform sooner, DeJoy said the Postal Service could’ve avoided much of its $80 billion in cumulative losses since 2007, and that the agency’s “operational and financial performance would not be in jeopardy.”

“Drama and delay do not get the mail delivered on time, nor does it pay our bills. Without timely legislative and regulatory form, we will be forced to pursue aggressive strategies to cut our costs and bridge the divide,” DeJoy said.

Meanwhile, DeJoy said package growth remains strong, and that volume should remain high through the end of the year. Chief Financial Officer Joe Corbett said the agency saw an 80% increase in package volume at the peak of the pandemic package surge, compared to the same period last year, but added that volume is now about 50% higher than it was a year ago.

While an increased package business has helped the USPS stave off a worst-case scenario for pandemic losses, Corbett said the package volume also led to “substantially increased work hours and expenses.”

Fredric Rolando, president of the National Association of Letter Carriers, said Friday’s reported losses demonstrate the need for Congress to provide emergency funding to the Postal Service in the next round of pandemic spending.

“In this economic and public health crisis, the Postal Service is proving more essential than ever, allowing tens of millions of Americans to shelter at home while postal employees deliver needed supplies, medications, and much more,” Rolando said. 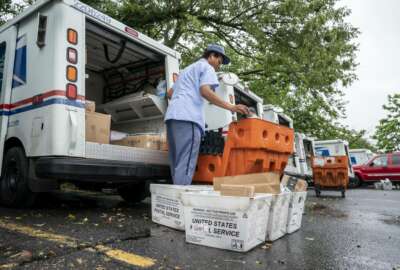 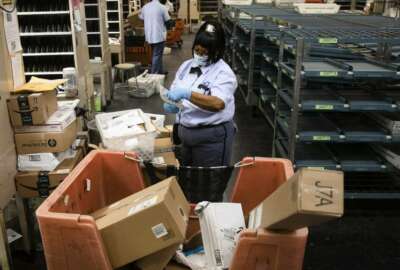