When the Veterans Health Administration had big supply problems early in the pandemic, it wasn’t just a matter of high demand all over. VA has longstanding issues with supply chain and inventory management. Federal Drive with Tom Temin got the latest from Shelby Oakley, the director of contracting and national security acquisitions at the Government Accountability Office.

When the Veterans Health Administration had big supply problems early in the pandemic, it wasn’t just a matter of high demand all over. VA has longstanding issues with supply chain and inventory management. Federal Drive with Tom Temin got the latest from Shelby Oakley, the director of contracting and national security acquisitions at the Government Accountability Office.

Tom Temin: Ms. Oakley, good to have you back.

Shelby Oakley: Thanks for having me, Tom.

Tom Temin: So you looked at the bigger issue and just review for us what problems VA did face early on in the pandemic? And I guess I should ask, are they still facing them?

Shelby Oakley: Yeah, VA was just like other entities worldwide, they struggled to obtain necessary personal protective equipment early on in the pandemic and had a real all hands on deck effort to try and obtain these supplies wherever they could. But because VA….VA is the nation’s largest integrated hospital chain, but it lacks an effective inventory management system. And what I mean by that is, is that their inventory management system is siloed at each of the VA medical centers, and it’s a manual process. And so this really left VHA with a lack of information at the beginning of the pandemic, to be able to make real strategic decisions about where the supplies were needed, because obviously, there were hotspots in the country. And being able to shift supplies across the enterprise as large as VA was an important thing that VA didn’t have the capability to do early on in the pandemic. Now they evolved and they developed kind of an online dashboard that allowed leaders to better monitor supplies. But it was a real challenge for these VA medical centers to get what they needed. Really, they faced a lot of volume of vendors wanting to sell PPE to the government, right? Some of them were, frankly, attempting to exploit the pandemic, it was pretty much an onslaught for these folks and kind of weeding through who are legitimate and who aren’t was a challenge. And while most vendors obviously have good intentions, and pulled through and delivered supplies, our work was showing the VA has had historic numbers of contract deobligations, and that means they took money off of the contract when vendors couldn’t deliver necessary supplies.

Tom Temin: So a mad scramble then can lead to some poor purchasing decisions.

Shelby Oakley: Yeah, exactly. So when you’re doing things quick and trying to kind of just get things awarded, in some instances contracts were awarded and the vendors couldn’t pull through. And so, we had to have some contract terminations that led to those deobligations I was talking about.

Tom Temin: And you also mentioned in the report that prior to the advent of the pandemic, the VA did have several initiatives going on to update their inventory and supply management systems. But those have problems with their own.

Shelby Oakley: Yeah, correct. VA kind of has had a lot of balls in the air with regard to supply chain management initiatives. It has what it’s called is its Medical/Surgical Prime Vendor program, which is supposed to be VAs preferred approach for obtaining medical supplies for its 170 medical centers. And so, these are contracts that are already in place that VAs medical centers can just….ordering officials can just call up and say, “Hey, I need ‘X’,” and it’s delivered the same day or the next day. And that’s in the process of being updated and rewarded. But it’s delayed significantly. And we issued a report on that earlier in this year. VA is also exploring going with the Defense Logistics Agency’s Medical/Surgical Prime Vendor program. And the Defense Logistics Agency has a similar type of approach to the VA. But obviously it’s for the Department of Defense facilities and whatnot. And so that hat comes with other complications that VA is still working through in terms of some of its requirements for contracting with veteran owned businesses and whatnot. And finally, VAs is really looking to use DLAs is Defense Logistics Agency’s inventory system itself, the actual physical system that will allow kind of better tracking and monitoring of inventory and supplies and whatnot goes beyond an inventory management system. But again, that rollout has been delayed and has faced some pretty significant challenges. And so, those among other things that have surfaced since the pandemic itself are many of the things that VA is contending with to try and improve its supply chain management.

Tom Temin: We’re speaking with Shelby Oakley, director of contracting and national security acquisitions issues at the Government Accountability Office. So is it fair to say then can we conclude that if VA could get these initiatives finished and running, they might have had fewer supply problems, and then could potentially have fewer supply problems in the next national health emergency?

Shelby Oakley: Yeah, I think many of the things that VA is trying to do will position it to better be able to respond in situations like this. At the very least, they would have more data and information to understand how to make better decisions, right? Two have the other initiatives that VA is trying to get underway are what are called Regional Readiness Centers. And these are essentially centers that are geographically dispersed around the country that would store personal protective equipment and other vital medical supplies for these VA medical centers. And they would be able to provide that surge capacity for VA in times of challenge like we’re facing now. And so those are underway. They face delays, they’re at an interim operating status. But that’s one of the approaches that VA is taking, in addition to the other things I mentioned. And then another approach VA wants to explore and is working on is participation in the Defense Logistics Agency’s Warstopper Program. And that program really is focused on maintaining an industrial base capacity on a regular basis such that you can flex that availability if something terrible happens. And and so these are all kinds of efforts that VA has underway to be able to improve how it can respond both on a day-to-day basis, and under normal operating circumstances, and in future emergencies.

Tom Temin: And you have looked at those prior efforts, GAO did look at them before the pandemic, and now looking at them again afterwards, did you have any fresh recommendations for VA, because it sounds like the agency is aware of the shortcomings there and wants to really get past them?

Shelby Oakley: Yeah like I said, VA has a lot of irons in the fire. They have a lot going on. And we didn’t make new recommendations in this report. But I testified in March on this topic. And we made a recommendation actually in that testimony statement. And what it really was is, how is VA kind of communicating and strategizing for the interplay of all of these various supply chain management initiatives that it has underway? There is no one strategy for how VA is trying to tackle this issue. It’s kind of like it’s going at it from many different perspectives, but it’s hard to understand, and it’s difficult to determine how they all play together to kind of move VA forward in this supply chain management approach that it’s putting in place. And because an effective supply chain management strategy was one of the things that led us to putting VA on the high risk list in 2019, we recommended that VA put in place kind of an integrated strategy for all of these various efforts that outline timeframes, resources, schedule interdependencies, so that decision makers can understand kind of how this is all going to play out in result in improvements for VA.

Tom Temin: And it sounds like, just as an aside, if they get their medical record system up and running, and they’re midway through that project, that would integrate all of the medical centers into one national system, unlike, as you mentioned earlier in the VistA System, every one is a stovepipe unto itself, and they don’t communicate city-to-city really?

Shelby Oakley: Yeah, you hit the nail on the head. The electronic health record system relies on some of these other systems that I mentioned, the Defense Logistics’ inventory management system, they go hand-in-hand. And so, this kind of more integrated, modern approach to all aspects of VAs delivery of health care for its veterans will be a huge improvement once it rolls out. But again, we lack information, and VA lacks information on how the timing, and interplay, and how these things are all going to work together over the next several years to move VA to that more modern approach.

Tom Temin: Shelby Oakley is director of contracting and national security acquisition issues at the GAO. As always, thanks so much for joining me. 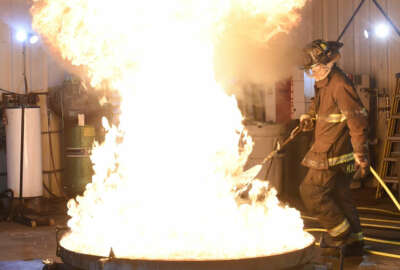 GAO: Cost of cleaning up PFAS chemicals is only going to increase