The Postal Service is moving ahead with plans to consolidate the delivery operations of more than 200 post offices and other facilities into large, regional hubs.

USPS management, in an Aug. 12 notice to postal unions, identified more than 200 “spoke offices” that would move their delivery operations to 21 regional Sort and Delivery Centers (S&DCs).

The consolidation plans, as announced to postal unions, will begin later this month, and will continue through February 2023.

The Postal Service is moving ahead with plans to consolidate the delivery operations of more than 200 post offices and other facilities into large, regional hubs.

USPS management, in an Aug. 12 notice to postal unions, identified more than 200 “spoke offices” that would move their delivery operations to 21 regional Sort and Delivery Centers (S&DCs).

The consolidation plans, as announced to postal unions, will begin later this month, and will continue through February 2023.

“This process will take time,” USPS spokeswoman Kim Frum said in a statement. “The first S&DC will be operational in Athens, Georgia this fall. We are currently evaluating more than 100 new locations nationwide driven by operational and financial modeling to best serve our customers.  The Postal Service will adhere to all legal, statutory, contractual, and regulatory requirements as we evaluate a potential nationwide rollout of this initiative in the coming years.”

The consolidation of delivery functions at the S&DCs will shift letter carrier operations, “where feasible,” to Sort and Delivery Centers. The restructuring will not affect the retail functions of these spoke offices, including PO box service, where applicable.

USPS expects the consolidation will allow it to provide reliable and efficient delivery for customers, while improving its appeal to small and large shippers. The agency expects this shift will allow it to reach a broader range of businesses and consumers through its USPS Connect category of services.

Frum said the consolidation will allow postal delivery routes “to be revamped to make them more efficient and cost-effective.”

Some letter carriers whose facilities are affected by this consolidation will have to commute farther to work, and they will have to drive longer distances to and from their routes in their postal vehicles.

USPS management, in a July 29 presentation, found the median commute for employees who work at impacted facilities in the mid-Hudson region of New York State will increase from 16 minutes to 26 minutes.

USPS management, however, also expects that the initial 10 Sort and Delivery Centers it envisioned would increase the number of delivery routes by 5-10%, creating an opportunity to hire additional letter carriers.

Frum said the consolidation will streamline USPS operations by reducing the time and the cost of transportation to facilities, and in case of co-locating delivery operations to Sort and Delivery Centers, eliminating the need for transportation entirely.

Frum said the Sort and Delivery Centers will have better infrastructure and adequate space, docks, conveyors, and material handling equipment to allow for more efficient operations, “while modernizing and leveraging currently underutilized and vacant postal facilities around the nation.”

The Sort and Delivery Centers also allow USPS to field more electric vehicles, Frum said, “since more routes would be at the optimal length to make such vehicles operationally feasible, and since the vehicles would be originating from facilities with enhanced electricity infrastructure to support the necessary charging stations.”

“S&DCs will allow for easier standardization and management of operations while improving building and operating conditions for employees,” Lloyd wrote.

Lloyd said that any movement of employees under this plan “will be done in accordance with the respective collective bargaining agreements.”

The consolidations are part of the $34 billion in cost-cutting USPS expects to make over its 10-year reform plan through “self-help management initiatives.”

Postmaster General DeJoy told reporters following a recent speech at the American Enterprise Institute that the Sort and Delivery Centers will be a mix of new construction and renovations to existing plants.

DeJoy said that in total, USPS plans to consolidate 500 facilities that USPS processes and moves mail through down to about 65 or 75 regional hubs.

DeJoy said he’s “committed to a stable workforce,” and is working with postal unions on this effort, but will easily manage any headcount reduction through normal attrition, which results from employees retiring or leaving the agency.

American Postal Workers Union National President Mark Dimondstein, speaking at the union’s annual conference in National Harbor, Maryland, told Federal News Network on Aug. 16 that USPS has yet to provide many details about the consolidation.

“We actually don’t know a lot yet. We’re trying to find out. We’ve had some meetings, but they’re big on concepts. They haven’t presented a lot of concrete facts,” Dimondstein said. “What we’re generally for, is we want the people of the country to get the best service that they deserve, under the law:  prompt, reliable and efficient services. So if these plans help that, then we’re going to be generally supportive. If we think they hurt them, we’re going to oppose them, and we just don’t know enough yet to know whether these plans are good for the people of the country or not.”

APWU members, however, appear less receptive to the restructuring plans from USPS management. APWU union delegates during the national convention voted in favor of a resolution calling for DeJoy’s resignation or firing.

Dimondstein, who has served as APWU national president for three terms, also faces a challenger for his leadership role this fall.

“Talk and catering to a [postmaster general] who is hostile to our membership is not a productive strategy and doomed to fail. As your president, I will take action to ensure a work-environment of dignity and respect for our members,” Marcotte wrote in his campaign statement.

Marcotte is also campaigning against “substandard wages” for APWU members, arguing that some top-step APWU members are earning less money than other postal union employees at lower levels. 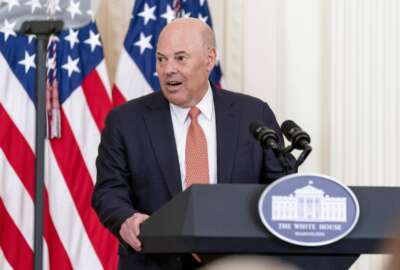 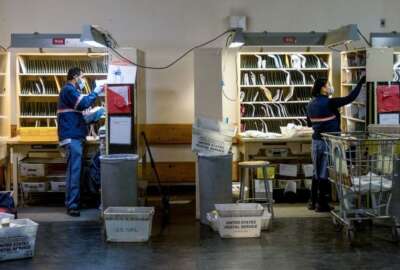