NEW YORK — This week the Air Force awarded a contract in three minutes. That’s astronomically shorter than the three months it usually takes the service to award a small business contract.

The breakneck pace was thanks to the Air Force’s Pitch Day, which awarded 51 contracts to companies that have little or no experience with the...

NEW YORK — This week the Air Force awarded a contract in three minutes. That’s astronomically shorter than the three months it usually takes the service to award a small business contract.

The breakneck pace was thanks to the Air Force’s Pitch Day, which awarded 51 contracts to companies that have little or no experience with the military. The service doled out $3.5 million to those small businesses on Wednesday — each in 15 minutes or less. The first installments of the companies’ contracts were in their bank accounts almost immediately.

While Pitch Day signifies a momentous increase in acquisition speed, it also indicates a sea change in the way the Air Force looks at the future of its industrial base and who it spends its money on.

“Our goal in the Air Force is to start expanding the industry base again,” Will Roper, Air Force assistant secretary for acquisition, technology and logistics, told reporters Thursday. “That is my moonshot for this year. We’ve got to do it on two sides: One strategy for the primes, one strategy for the dual-use or commercial companies.”

Pitch Day’s premise was simple — bring in companies, listen to a 10-minute pitch, spend 5 minutes asking questions and then, if the Air Force likes the idea, hand them a contract before they step out the door. Roper said the Air Force did research on the companies before they invited them to pitch their ideas to ensure they were legitimate.

Pitch Day was aimed at those dual-use and commercial companies Roper mentioned, and so far the Air Force is casting a wide net of investments. The $3.5 million awarded to the 51 companies on Wednesday will grow in installments to $8.75 million. Last week, the Air Force gave out even more funds to small and emerging businesses. It awarded 122 phase 1 contracts worth $6 million and 69 phase 2 contracts totaling $60 million. That’s a grand total of 242 contracts worth $75 million.

If you’re confused about the phases of these small business contracts, Ryan Helbach, Air Force Research Laboratory “Intrapreneur” had the details.

“You can think of phase 1 as initial seed funding or a lower dollar amount angel investment funding,” Helbach told reporters. “If you take a dating analogy, it’s a coffee date. It’s making sure there’s a connection there and that what the companies are saying they are going to do is really what they are going to do, and what the government wants is really want it wants. Then we get into phase 2. That’s really getting into those bigger dollars, so that’s where we start putting bigger money into it or if you look at the dating analogy maybe we’ll go take a trip together somewhere. It’s much more committed.”

That second phase is more developed and focuses more on prototyping as well.

As the Air Force handed out these contracts, it also grew its industrial base by 242 companies in less than two weeks.

Roper said the Air Force needs to do that in order to compete in today’s threat landscape and even to be attractive to potential employees.

“It takes decades between fighters, decades between tankers,” Roper said earlier this week. “When the Air Force started off, it was years — in the small single digits. A fundamental flaw that we have in working with the industry base is that we don’t do enough big ideas, enough prototypes, enough diversifying, because the frequency of our awards is too slow.”

While the prime defense contractors are still delivering major weapons systems, Roper said they have fallen into the same rut as the Defense Department — building huge programs that take years and cost billions. The primes are stuck pitching old ideas and while those major programs are being made, software is potentially being developed in the course of a month that can knock out an entire fleet. 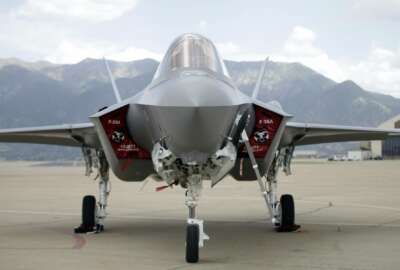 “Industry days happen when we think we know what we need,” Roper said. “There were a lot of moments we looked at the companies at Pitch Day and said ‘I can’t believe we don’t already have that.’ Chemicals that let us find downed pilots, medical devices that stabilize, small radars that let us find people breaching a perimeter at an airbase.”

Pitch Day may have started in New York, but Roper wants them all over the nation. He was quick to point out that the Air Force has no bases in the area, and therefore is missing out on outreach and business connections in the New York metropolitan region. That rings true for plenty of innovation hubs around the country.

Roper said the Air Force needs to open its doors wider and only provide a small amount of guidance for what the service thinks it wants.

“We need to fix our process so there’s transparency from beginning to end,” he said. “It’s a laborious path to get to us and we are going to try to fix that. Even if we do, we need to meet the companies and they need to meet us.”

The initial contracts are small — just $50,000 or $60,000. That money, though, can make or break small companies willing to gamble on a government contract.

Some companies were so small that the owner would have to go back to his or her day job if a contract wasn’t awarded.

But Roper said that’s how innovative companies work. They start in garages and get feed money from their friends and family.

The 15-minute contract gives a company with a good idea a better chance. The companies don’t need bridge gap insurance, they don’t need a loan to hold them over for 120 days. They walk home ready to continue their work.

“Pitch Day was just a terrific, terrific process all the way around,” said Bill McLennan, CEO of FASTPORT, one of the companies to receive an award Wednesday. “At the end of our presentation we were hustled into a room, hit the credit card and literally within three hours the first round funding hit the bank. It was amazing, just amazing.”

McLennan, whose company mostly works with veterans and does not have any military contracts, said he was drawn to Pitch Day by the process.

“Everything was laid out so clearly, so we could judge if we have a chance to win a contract and, if so, what’s the effort and the cost involved from us,” he said.

FASTPOINT’s technology individualizes career paths for current and potential airmen so recruiters can help them stay in the military while allowing them to follow the trajectory they want.

While she’s worked with the government before, it’s mostly been outside of a Defense capacity.

Malveaux said her perceptions of government contracting were slow and cumbersome, but Air Force Pitch Day was different.

“It was really, really quick,” she said. “My manager was just like ‘Hey, your idea could work in this. This looks cool.’ Then a few days later I wrote a proposal and slides and then it was like no amount of time.”

The Air Force selected her to come to New York; she practiced her pitch and walked out with a contract.