Natural disaster first responders are the people who arrive on scene before anyone else, ready to offer aid to those who need it.

But even before those boots are on the ground, the analysts at the National Geospatial Intelligence Agency are working to provide data to help responders assess damage, locate victims and also keep them safe and informed about the area of emergency.

Natural disaster first responders are the people who arrive on scene before anyone else, ready to offer aid to those who need it.

But even before those boots are on the ground, the analysts at the National Geospatial Intelligence Agency are working to provide data to help responders assess damage, locate victims and also keep them safe and informed about the area of emergency.

Geospatial means “taking layers of information, spatial layers of information for decision-making purposes,” Wolpert said. “One of the things that we can do is combine a lot of different layers to tell us where the best place is to send supplies or tell us” about areas of impact where responders need to send in search and rescue personnel.

”Those type of [problems] are being solved with this tradecraft, this expertise,” Wolpert said.

Wolpert said NGA takes it cues domestically from the Federal Emergency Management Agency — ultimately the Homeland Security Department — and internationally from the Office of U.S. Foreign Disaster Assistance, which is under U.S. Agency for International Development.

“There’s a good mix between domestic and international,” Wolpert said. “We stay involved. And the times we’re not activated for disasters, we’re getting ourselves ready for the next big event.”

The program is comprised of about 30 analysts. NGA has been offering this type of data assistance since 1992, after Hurricane Andrew, and became more publicly visible after Hurricane Katrina in 2005.

Recently, NGA was able to help with disaster assistance after the April 2015 earthquake in Nepal.

The 7.8 magnitude quake was what Wolpert called a “no notice event,” and it happened in a region without a lot of connectivity and infrastructure to access geospatial data.

“It’s very important because you’re getting access to areas that don’t necessarily have a lot of information coming back and forth,” Wolpert said.

One area in the Langtang Valley was rumored to have been hit by landslides after the quake, Wolpert said.

“When we were able to get imagery over that area we quickly realized that this area was heavily impacted, these people were severely cut off and needed a lot of help,” he said. “We were able to produce products that showed the impact to those areas, get that information to OFTA, to the NGOs on the ground, to as many people as we could, and the information was able to provide support to those people and get them quickly back on their feet.”

“Ebola was the first instance where we set up a public-facing website where we got all the information that we’ve combined, gathered and got that out to the public,” Wolpert said.

Wolpert said NGA uses tools that are very similar to those that are “off-the-shelf” for commercial use, to produce the data used by first responders. He offered Google as one example, and several other types of “exploitation and production software” to create this data.

NGA also has developed a platform called GeoQ, an exploitation software, which is a tool that allows NGA to access open source and unclassified imagery.

“We can do this in a collaborative way where a community can digitize a specific area collaboratively, they can see each other’s work, they can pull from open imagery sources … to create this picture,” Wolpert said. “As we go forward we also want to share this with our partners so they can get in there and do it with us.”

The information is only taken, however, when NGA is supporting a disaster, Wolpert said.

“That’s the only time we’re taking this information, but when that does happen we have the agreements to go forth and try to take all this information and make the best use of it,” he said.

Wolpert said NGA has been working with FEMA to post to a portal, as well as developed an “event page” portal. This event page, Wolpert explained, includes NGA’s products, some access to imagery and points of contacts for a specific event.

The information is pushed out through something like a cloud environment, Wolpert said, but not directly from NGA’s own in-house environment.

“These servers are somewhat removed from our site but are built in a way that can be made accessible to many of our partners,” Wolpert said. “If we need to we can push to the public through other mechanisms such as the FEMA Cloud.”

Wolpert said analysts are looking at structures and before-and-after imagery, which helps show the extent of damage.

NGA is also expanding the sources for the images its uses, bringing in photos and videos from social media, and helicopter and airplane video, when conventional satellite imagery is not available or the quality of the images is not good enough, such as when a thick cloud cover after Superstorm Sandy obscured the view of damaged areas along the East Coast.

“We take all these sources, we create a derived map, which is just a fancy way of saying we take information that we get off the imagery, interpolate it onto a map that they can understand. We see the damage on the imagery, we digitize the area on a map, and get that information out to first responders so they can react to that information.” 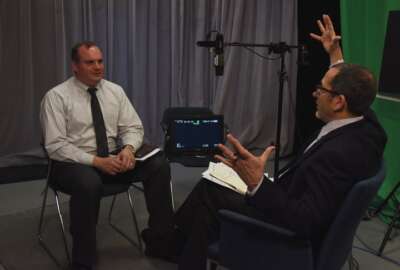