As the values of cryptocurrencies rise and fall meteorically, and your refrigerator orders milk on Amazon because it noticed you ran out, it can be easy to get caught up in the excitement over the technologies driving these attention-grabbing advances. But some technology leaders at the Veterans Affairs Department think it might be time to take a step back and evaluate them more dispassionately.

“Whenever you’re discussing a technology that’s got the level of hype as [Internet of Things and blockchain] do, I think there’s the danger that you’ll wind up in a situation where you’ve got a solution in search of a problem. I think we’re trying in VA to really start with the problem we’re trying to solve, and look at any type of technology and product that might help us solve that problem,” Charles Worthington, VA’s chief technology officer, said during a Jan. 16 AFCEA panel.

He said VA’s biggest technological issue right now is communicating with other organizations in a standard way. The department is making a big push to improve interoperability of its health records, including committing to switching from its current records system to the one DoD now uses. It’s not clear what blockchain or Internet of Things could contribute when it comes to solving that problem.

He said he’s trying to institute a change in mindset at VA where the focus is on the problem, and the possible solutions are flexible. He said it requires a certain nimbleness to take advantage of new solutions rather than predetermining them.

And sometimes, it’s not the new technology itself, but the underlying concepts that are valuable. For example, he said cloud computing itself isn’t really a new idea.

“Having a relatively low-powered client talking to a high-powered server is how computing began. But getting cloud into the hands of developers led to new, interesting problems,” Worthington said.

That’s how the concept of Dev/Ops evolved, which Worthington described as a “paradigm shift.” And while he’s skeptical that VA can find a use-case for blockchain itself, he’s excited about the potential fallout.

“I’m interested in ‘what is the Dev/Ops of blockchain? What is the new movement we’re not even thinking about right now but that these underlying technologies could unlock,’ which is where I think a lot of the real value will be,” Worthington said.

Meanwhile, Drew Myklegard, VA’s enterprise solutions manager, said that technicians and technologists all across the VA are innovating, but that’s a difficult thing to translate to the world inside the beltway.

“It’s very exciting, up until the point that we want to take one of those ideas and scale,” he said.

He estimates, for example, that the VA has roughly 70,000 Internet of Things-connected devices in use across the department. And while these devices are certainly beneficial for the patients and doctors, they present a challenge to the IT departments that have to secure them.

But he said a VA roadmap for IoT is coming out soon, and that the department is committed to helping external developers, because it’s interested in buying, not building, technology.

“If we think we can work hand in hand without that heavy arm or that heavy purchasing power of the VA, because when we write a check for something at our scale, for a product, we’re going to shift the market,” Myklegard said. “We want to move away from shifting the market so much and have a symbiotic relationship where we’re learning and understanding from them better.” 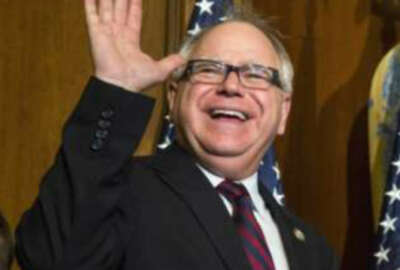 Rep. Walz: VA audit would not be a ‘punitive hammer’

VA’s IG settling in, cracking down on fraud and mismanagement