Flight deck operations on an aircraft carrier have been described as a ballet of chaos. It’s an apt description for one of the most dangerous jobs in the world.

The flight deck crew is responsible for assisting the takeoff and landing of jets at breakneck speeds, handling highly flammable jet fuel and negotiating catapult and arresting gear that allows planes to operate from a small strip in the middle of the ocean.

So you might not blame flight deck operators if they don’t want to go right out onto an aircraft carrier after some time off and getting a little rusty with their skills.

Now through video game technology, sailors can brush up on their skills before jumping back onto a flight deck and putting themselves and others into danger.

“Having training available where we can actually practice and repeat activities as a team or as an individual or a team of teams helps us simulate the very dangerous environment in a safe location,” said Courtney McNamara, Naval Air Warfare Center Training Systems Division’s advance gaming interactive learning environment team lead, in an interview with Federal News Network. “Our new technology helps them simulate that in a safe location. It also helps them practice in emergency conditions that normally can’t be done on the real ship.”

The simulator looks like something you might see in an arcade. It has a panoramic screen and crew members can talk to each other over radio communications.

The simulator uses virtual reality, gesture recognition and touch screens for controls and real ship systems. It is comprised of three programs, one for landing signal officers, one for catapult launches and a third for primary flight control.

The project came out of the Office of Naval Research’s Global TechSolutions office, an entity that takes on ideas from sailors on the ground. Technologies that come out of TechSolutions are truly built from the bottom up, in that the office takes ideas directly from sailors who spot issues that can be solved through innovation.

TechSolutions calls on the Navy’s research and development establishment, which is a community of engineers across the Navy and Marine Corps. Once a developer is selected they try to provide a prototype within a year, said Jason Payne, acting program officer at TechSolutions.

An all-government civilian team built the air deck simulator from the Unity game engine software to step up the realism of the characters and environment.

“We can simulate weather conditions, we can simulate all of the ship systems themselves so that all of the proper data and information is getting to the trainees so they can make good decisions,” Mcnamara said. “We are also using real aerodynamic data for the aircraft through a partner organization.”

The simulation is currently being used by sailors and the catapult simulation replaced the trainer of record at Joint Base McGuire-Dix-Lakehurst. The two other programs are being used at the Landing Signal Officer Schoolhouse at Naval Air Station Oceana. The Navy is currently figuring out where else it can send the simulator.

“We had over 50 fleet members from five different carriers and two different schoolhouses throughout the entire process,” Mcnamara said. “We’ve had fleet feedback not only as part of the design, but part of the review of the system from day one. There’s a real interest in seeing this move forward quickly. There’s a desire to train on it yesterday.” 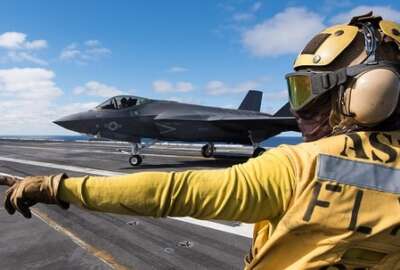 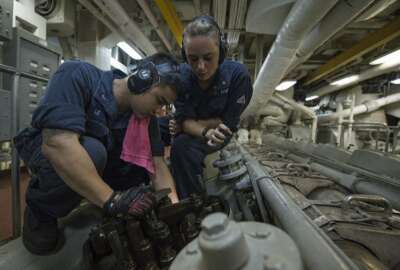