China and Russia, the U.S.’s closest military competitors, both have said that leveraging data is the key to military dominance in the near future. Defense Intelligence Agency Director Lt. Gen. Robert Ashley said 2.5 quintillion bytes of data get generated each day, and it’s increasingly a part of our lives that can’t be compartmentalized. Smart houses, cities, infrastructure, industrial components, even personal lives and more rely on data.

“Where is that data going? Who’s controlling it?” Ashley said August 19 at the Department of Defense Intelligence Information System Worldwide conference. “So it’s not just about the Internet of Things. For consumers, it’s other risks that lie out there in data and our inability to leverage it. Terrorist networks, misinformation, deep fakes, confusion, distrust in institutions. Then what’s our job as a combat support agency? We have to supply the war fighters with information that is accurate and that is trusted in an environment where misinformation exists.”

It’s commonly portrayed as a question of speed: whoever can make decisions fastest wins. But Ashley said it’s more nuanced than that. The Defense Department can operate at speed, he said. The problem is operating at scale.

Ashley said DIA has been dealing with large, complex datasets for decades. That’s not a problem either. The problem is that they’re not all in the same place, and don’t talk to each other.

“We’ve got to figure out how we aggregate information together and it gets back to the core of why this agency exists, is to provide foundational intelligence on four militaries and the operational environment,” Ashley said. “And since it is football season, my rough analogy is this is the scouting report on the team we’re going to play, and we update the scouting report every single day. Not only that, we’re going to tell you the good restaurants to go to, where to avoid traffic as we tell you about the operational environment.”

DIA is already working on a baseline for this with its Machine-Assisted Analytic Rapid-Repository System, or MARS. Unlike the Modern Integrated Database, MARS is a dynamic information environment that replicates a virtual model of adversaries and competitors.

“So think about the Arab spring. This is kind of where big data comes in,” Ashley said. “What was taking place in the northern tiers of Africa? The communication was taking place. The revolutionary conversations, the protests, everything was involving the conditions. And the IC saw those conditions. But from an indications warning standpoint, we didn’t necessarily see the when. When this was going to all kick off.”

But the data isn’t a panacea; it has to be paired with humans that teach algorithms to interpret the data correctly.

“But with all the data, all the stuff that comes out there is also a big piece of this that speaks to traditional analysis and good tradecraft, because you can’t just say the box told me the following and so we’re already working our way through that,” Ashley said. “[We’re] building analytic data teams, where we take a tool developer, a methodologist, an all-source analyst and a data scientist and we kluged them together. [We] Look at how we deal with information and then we train those algorithms with good tradecraft, where I can tell you I have a high probability – because of the way I’ve trained that algorithm – that what I am telling you is accurate.” 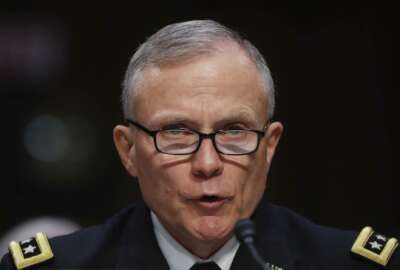