Dave Bowen, the DHA chief information officer, said the military services on July 29 approved his office’s concept of operations for the health care IT shared services. He said it’s one of the criteria they have to achieve to reach full operational capability.

“We have stood up 10 shared services, streamlined processes in both our clinical...

Dave Bowen, the DHA chief information officer, said the military services on July 29 approved his office’s concept of operations for the health care IT shared services. He said it’s one of the criteria they have to achieve to reach full operational capability.

“We have stood up 10 shared services, streamlined processes in both our clinical and business operations and standardized things across the enterprise where it has made sense while preserving the uniqueness of each service’s medical capability,” Bowen said, at the July 31 AFCEA Washington, D.C. Health Summit. “Full operational capability is not a finish line for us to declare victory, but it is a milestone.”

Current Secretary Ash Carter signed a memo in March 2013, when he was deputy secretary establishing the DHA’s structure. DHA incorporated the TRICARE Management Activity and the Joint Task Force National Capital Region Medical, and eventually will provide a host of back-office services for most of the services medical needs.

Bowen has been leading the DHA march toward full operational capability since the organizational structure first started to come together. Part of FOC means bringing together about 56 hospitals, about 350 clinics and 9.6 million members in the military’s health plan under the agency’s $2 billion IT budget.

Bowen said DoD will deploy the electronic health record in phases with the first instance expected to be ready by December 2016 in the Pacific Northwest region.

He said the prep work for that rollout already has begun and DHA will update tools, training and lessons learned throughout the implementation so other regions can learn from other’s experiences.

“There are a number of moving parts for DHA to make health IT a shared service and it involves all operational elements,” Bowen said. “The IT infrastructure has to be in place and operational. We have to standardize clinical processes ahead of deployment.”

Bowen said DHA will work with Leidos over the next year to take its clinical process standards that it has updated over the last 9-to-12 months and tailoring the software to incorporate those processes.

“For DoD, it’s a monstrous culture change,” he said. “To get all of our clinicians together to agree on over 700 clinical processes is very significant.”

Bowen said the standards effort is from the user’s fingertips to the data centers. He said the EHR contract gives DoD a much needed “kick in the pants” to do something the commercial sector did years ago.

“We’re going to do more centralized management. We are going to lock down our systems. We are going from five help desks to one. All these kinds of things the commercial world did years ago,” he said.

Bowen said the standardization isn’t just around health IT, but the infrastructure that supports the new electronic health record.

DHA migrated most of its email system to the Defense Information Systems Agency email in the cloud, and has come to an agreement with the services on what the standard desktop platform will look like, specifically for commodity software and applications.

“A real issue for us is network connectivity from outside world to the base and from base point of presence to the medical treatment facility in the base. We are often affected by line service maintenance of circuits and routers, which they sometimes do without telling us and the hospital goes down,” he said.

Bowen said DoD is solving the network connectivity problem by creating a “health IT only lane” on its information highway.

“We are working with medical community of interest to do that,” he said. “It does so many things for me because it takes my stuff off the line networks. We no longer have to certify every piece of equipment three times, by the Army, Navy and the Air Force. That will save millions of dollars a year because we will have one designated authorization authority for DHA, and that’s me. I will sign off and once it’s authenticated and authorized, the IT device can put anywhere in network. That will lead to standardization around medical equipment. We have over 600,000 pieces of medical equipment and of those 60,000 different ones. We need to, as most commercial health systems have done long ago, standardize our buying practices around medical equipment, putting the stuff on the network and getting it working. We’re working on all those dimensions. We are standardizing our local area networks within the medical treatment facilities and we are working with DISA and we are part of the JRSS process and JIE that DoD is rolling out.” 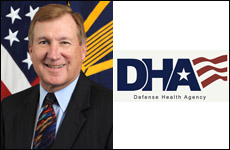 Defense Health Agency comes into shape through IT shared services