Air Force finally in alignment across most major IT foundational elements

All the pieces of the Air Force’s digital modernization roadmap finally are in place.

It’s been a two-year effort to arrange the money, the oversight and the governance that will make the strategy successful.

Bill Marion, the outgoing deputy chief information officer of the Air Force, said this structure will make it easier for the next deputy CIO to pick up where he left off and accelerate the pace of transformation.

“Continuing along that roadmap...

All the pieces of the Air Force’s digital modernization roadmap finally are in place.

It’s been a two-year effort to arrange the money, the oversight and the governance that will make the strategy successful.

Bill Marion, the outgoing deputy chief information officer of the Air Force, said this structure will make it easier for the next deputy CIO to pick up where he left off and accelerate the pace of transformation.

“Continuing along that roadmap line, all of the enterprise IT-as-a-service (EITaaS) and related IT and digital modernization efforts are very front and center. We have to keep accelerating them and keep driving them,” Marion said during an “exit” interview on Ask the CIO. “I think we will accelerate 5G even more, and I think COVID-19 will drive unified collaboration even more. And the journey we are with the chief data officer where data is a strategic asset is another key one.”

The other major push is around the workforce. The Air Force launched a digital talent management effort to equip airmen with advanced analytical, programming and data skills.

“We have to continue to transform risk management. Programs like the bug bounty programs, continuous assessment and looking at dashboarding of risk and being able to execute at speed and we have to be able to adjust based upon that risk model every day,” Marion said. “Compliance-based risk is just not going to work. We have to get into this truly active, continuous modeling format.”

Marion, who left federal service after 28 years on May 1, said he will join a large systems integrator and continue to work in the federal market to implement digital transformation projects. He declined to name which company he is joining.

During his career, Marion always served in the Air Force, coming straight out of college as a math major and joining as an IT specialist in the intelligence community.

He worked with the air intelligence agency where he learned about cybersecurity, then went to Air Combat Command and then to Air Force Space Command. He ended his career at headquarters as the CIO of the talent management organization and then as deputy CIO of the entire service.

Digital U is a start

Over the course of his 28 years, Marion said the area he wished he’d spent more time working on was the training and preparing of airmen and airwomen for the digital transformation.

“It was an interesting sequence of foundational steps to be the deputy CIO — the IT background, intelligence background, the cyber background and working for some very stellar leaders like Gen. [John] Hyten [vice chairman of the Joints Chief of Staff], who taught me a ton,” he said. “The thing we have to invest more in going forward is the whole digital talent management side of it. It’s kind of creeped up on us as a nation. We talk a little bit more about it every year. We do a little bit more every year, but I think it’s time to rip off the proverbial Band-Aid on that one and make some real investments.”

The Air Force kicked off a digital workforce training effort in December with the launch of Digital U, an online schoolhouse similar to Udemy or Codecademy that will let airmen learn basic cyber skills or challenge themselves to learn coding languages.

Marion said Digital U is a foundational step for every airmen to learn digital skills.

“We are looking at things around language initiatives to see if people know python or R and how can you incentivize further development based upon real life skills. There is a financial and occupational tie we are trying to make,” he said. “The larger piece of it is the workforce structure. How do you force develop someone through that who isn’t a digital native? I think we have done a good job developing cyber airmen who are more in those occupational series. But what I’m really trying to get to with digital talent management is — I use the term, ‘every airman is a digital airman’ — how do we make every airman a digital airman through the use of tools, incentives and workforce opportunities to continue to develop and modernize in that space.”

Marion added that Congress has given the Air Force plenty of authorities and flexibilities around direct hire, expedited hiring and the ability to build in financial incentives. But the Air Force, in many ways, is a single effort and Marion said a Defense Departmentwide or governmentwide effort is what’s needed even more.

Along with the people priority, Marion is leaving the next Air Force deputy CIO a long list of priorities on the technology side, starting with the continued roll out of the enterprise IT-as-a-service (EITaaS) initiative.

The Air Force has implemented new pilots around IT service desk, AT&T and Microsoft are launching their mesh networks and a new security architecture effort with Google is just getting started at the “risk reduction” bases, Buckley Air Force Base in Colorado; Maxwell AFB in Alabama; Offutt AFB in Nebraska; Joint Base Elmendorf-Richardson in Alaska; Cannon AFB in New Mexico; and Hurlburt Field in Florida.

Marion also said the Cloud One and Platform One efforts are part the network modernization effort. He said 40 large scale applications live on Cloud One and by the end of the year, the entire Air Force will have moved to Office 365.

“We are continuing to move forward with our bring-your-own-device (BYOD) program and accelerating that option,” he said. “Network-as-a-service has had some challenges, but we are seeing some good progress specifically on the Microsoft side in the work they are doing and looking at how they are starting to transform our network. The bottom line is there are a couple of challenges like there are with any big project, but I think there is some really big goodness around these big programs around cloud, mobile devices, end user support and help desk. Our biggest focus is how do we start to scale those into large number of users from an acquisition perspective? That is one of the key next steps for whoever follows me.” 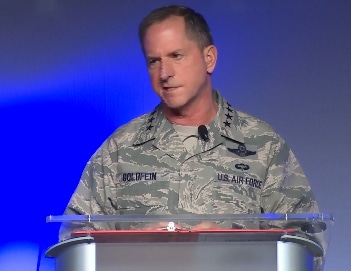 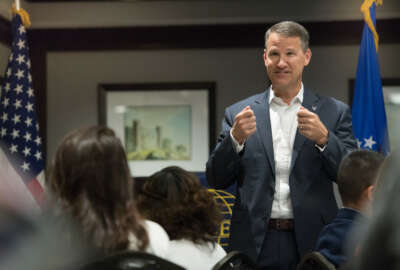