It’s official now. Employees and annuitants will have greater peace of mind about their federal health insurance benefits during future government shutdowns.

Under new regulations, which the Office of Personnel Management finalized Friday, federal employees will no longer see major disruptions to their federal health and life insurance benefits during future government shutdowns.

This means employees will be allowed to enroll or make enrollment changes in the Federal Employees Health Benefits Program (FEHBP) and Federal Employees’ Group Life Insurance (FEGLI) Program during future lapses in appropriations.

Previously, furloughed employees or those working without pay during past government shutdowns couldn’t make enrollment changes to the FEHB because they were placed in “non-pay” status.

In addition, employees who process new dependents or FEHB enrollment changes will be considered “excepted workers” under this new policy, and agencies will keep them working during future government shutdowns.

Federal employees make most FEHB changes during open season, which typically runs from mid-November to mid-December. But some had difficulty enrolling new dependents during the last 35-day government shutdown, because the employees who would otherwise enroll new dependents were, in some cases, furloughed.

Most federal insurance programs already continue during government shutdowns, but if the lapse goes on for more than two consecutive pay periods, these programs could go on to directly bill their enrollees for missing premiums.

That scenario almost occurred during the most recent government shutdown that lasted for 35 days, but OPM made an emergency extension and allowed enrollees to continue their coverage in non pay status for six weeks.

But moving forward, federal employees won’t have to worry about the possibility of losing dental or long term care insurance. OPM’s new regulations will allow coverage under FEDVIP and FLTCIP for furloughed and excepted employees to simply continue.

Once the government shutdown ends, FEDVIP and FLTCIP premiums will be paid from the participants’ back pay — or some other source if enrollees make direct FLTCIP payments, OPM said.

Under a bill passed into law in 2019, Congress appeared to guarantee back pay for all excepted and non-excepted employees during future government shutdowns.

OPM received only a handful of comments on the draft policy. All agreed the new regulations would alleviate stress and uncertainty for the federal workforce during future shutdowns, which often induce economic anxiety for some employees.

Federal payroll providers will, however, need to make adjustments in their own systems in order to process back pay and premium payments effectively ahead of future shutdowns, OPM said.

The 2020 provisions originated as standalone legislation, which a bipartisan, bicameral group of lawmakers had introduced in reaction to the 2018-2019 government shutdown. The group included the late House Oversight and Reform Committee Chairman Elijah Cummings (D-Md.) and several other members of Congress from the Maryland and Virginia delegations.

They were clearly reacting to the most recent government shutdown, which, because of its length, created several problems for federal employees trying to enroll new dependents or make other important changes to their insurance. 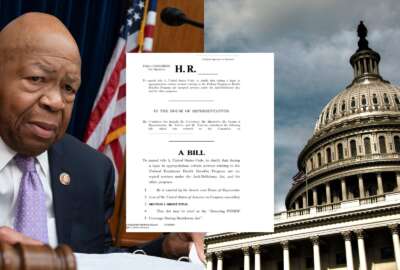