The Defense Department’s Office of the Inspector General is looking to data analytics and artificial intelligence tools to respond more quickly to the flood of calls it gets from its whistleblower hotline every year — and to stay ahead of fraud before getting a call about it.

“In many different ways, it can be used to proactively look for fraud so that we’re not relying on people that actually come to us to expose fraud,”...

The Defense Department’s Office of the Inspector General is looking to data analytics and artificial intelligence tools to respond more quickly to the flood of calls it gets from its whistleblower hotline every year — and to stay ahead of fraud before getting a call about it.

“In many different ways, it can be used to proactively look for fraud so that we’re not relying on people that actually come to us to expose fraud,” DoD Principal Deputy IG Glenn Fine said at a conference Tuesday marking National Whistleblower Day.

David Yacobucci, the assistant IG for analytics, acknowledged limits to what these AI tools can do, and said they won’t replace the work of DoD’s auditors and investigators.

Data analytics algorithms, for example, can’t show human operators how they’ve arrived at an answer, but when auditors are looking for a needle in a haystack, Yacobucci said these tools can “help narrow the haystacks.”

“There’s no certainty with data analytics, and that’s OK. From my point of view, that’s the wrong question. Is it 100% certain that we’re going to get everything right when we look at a million transactions? The answer is no. But what I can guarantee is it’s repeatable. When you run the algorithms against the data sets … it’s repeatable and it’s transparent,” Yacobucci said.

These tools, he added, can help empower IG probes by ingesting a superhuman volume of data and looking for trends and “nonobvious patterns” of fraud.

“That’s a very powerful thing. If you have, say, 100 companies you’re looking at for fraud … You have limited resources, you can’t look at all of them,” Yacobucci said.

DoD OIG has also improved the IT architecture of its whistleblower hotline to field responses more quickly, and Fine said the office has made a “concerted effort” to bring down a backlog of whistleblower cases that peaked in 2013.

“Whistleblowers need to have their complaints handled in a timely way, otherwise they will not have confidence in the system. I would say that’s one of the key things that needs to be focused on. It is a challenge, given the multitude of complaints we get, but timeliness is very important,” Fine said.

The IG office now handles top-priority complaints, which deal with threats to life or safety, within one day after receiving them. In FY 2017, Fine said the OIG would have taken up to five days to handle those requests. The OIG has also improved its metrics for reviewing hotline completion reports, which come back when auditors have responded to a case. Those had taken up to 45 days, but now only take 10 days.

Recent improvements also include an “intelligent phone tree” and a revamped content management system to ensure that more than 10,000 calls annually to DoD OIG’s tip line get routed to the right person sooner.

Fine said these improvements have also helped the OIG get a handle on “frequent filers” who submit multiple times to the OIG’s hotline.

“That’s the challenge of a hotline, to separate the wheat from the chaff, because there are very serious complaints that result in serious actions … Some of them, to be honest, are frivolous.”

Aside from call volume, the DoD OIG encounters bandwidth challenges from overseeing the world’s largest organization. Its staff of about 1,800 oversees more than 3 million people, an annual DoD budget of more than $700 billion, and more than $2.7 trillion in DoD assets.

Its portfolio of real estate and military bases encompasses more than 20 million acres – about the same size as Pennsylvania. In order to assess its oversight capabilities, the DoD OIG undergoes peer reviews of its audit and investigation programs through the governmentwide Council of Inspectors General on Integrity and Efficiency.

“It’s sometimes painful to be under the microscope, [but] it makes you better,” Fine said.  “It’s kind of like going to the dentist. When you’re in the dentist chair, it’s painful, but you come out healthier, and I appreciate that.” 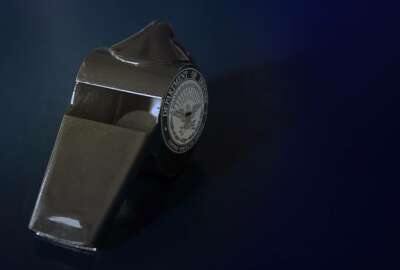