A bill cracking down on improper payments from the federal government is heading to the President’s desk after passing the House earlier this week.

The Federal Improper Payments Coordination Act of 2015 gives state officials and contractors access to the Treasury Department’s “Do Not Pay” initiative, a system of databases that federal agencies already use to verify vendors and beneficiaries seeking payment from the government.

The bill tasks the Office of Management and Budget with providing privacy requirements and guidance for new users of the “Do Not Pay” system.

The bill also requires agencies to review the Social Security Administration’s Death Master File, a massive database of former benefit recipients that have died. The database is meant to protect against identity theft or fraud.

It was unanimously approved by the Senate in July.

“Taxpayers expect the federal government to ensure that it is paying the right people, in the right amount, for the right reason,” Johnson said. “I’m pleased that my bill with Senator Carper to curb wasteful federal spending has passed the House and Senate and will be sent to President Obama. The federal government’s efforts to stop improper payments have failed, as is clear from last year’s $19 billion increase in improper payments.”

The Government Accountability Office reported in March that the federal government gave over $125 billion to ineligible recipients in 2014, a 14 percent jump compared to the last fiscal year.

“Over the past several years, federal agencies have taken concrete steps and made significant strides to increase accountability and transparency in spending,” Carper said. “Despite agencies’ efforts, improper payments continue to cost agencies billions of taxpayer dollars, and ultimately undermine the effectiveness of the services that Americans rely upon. This legislation builds on past bipartisan efforts to implement stronger program integrity measures across the federal government and provide agency officials with the tools they need to identify and prevent improper payments.”

The Johnson-Carper bill builds on the progress made by other laws passed in recent years. In 2010, the Improper Payments Elimination and Recovery Act was signed into law, and set up governmentwide improper payment policies for agencies to follow. A follow-up bill, passed into law in 2013, set up the federal “Do Not Pay” program. 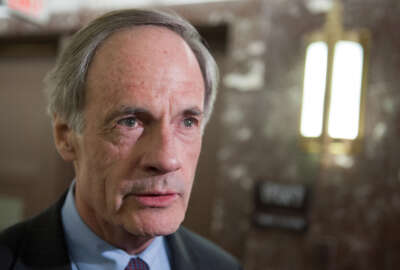