Lawmakers say officials with the Environmental Protection Agency “cast a blind eye” to the worsening situation in Flint, Michigan, and didn’t enforce its own water quality regulations.

At a House Oversight and Government Reform Committee hearing on Feb. 3, members and witnesses grilled the Michigan Department of Environmental Quality (MDEQ) for relaying inaccurate information to EPA officials, but also laid blame on the EPA for failing to investigate the crisis more closely once signs of misconduct...

Lawmakers say officials with the Environmental Protection Agency “cast a blind eye” to the worsening situation in Flint, Michigan, and didn’t enforce its own water quality regulations.

At a House Oversight and Government Reform Committee hearing on Feb. 3, members and witnesses grilled the Michigan Department of Environmental Quality (MDEQ) for relaying inaccurate information to EPA officials, but also laid blame on the EPA for failing to investigate the crisis more closely once signs of misconduct became clear.

“Based on what I have seen, the EPA officials should have moved much more aggressively after they detected the heightened levels of lead. But states are the primary enforcement agencies for the Safe Water Drinking Act, not the EPA,” Rep. Elijah Cummings (D-Md.), ranking member of the committee, said Wednesday.

Committee Chairman Jason Chaffetz (R-Utah) said he found reports of EPA’s mismanagement troubling. He cited a July 2015 hearing in which the same regional office was investigated for allegations of whistleblower retaliation.

“I’m disappointed in the response at the local level, at the state level and at the federal level. This is a failing at every level,” Chaffetz said.

Flint resident LeeAnne Walters told the committee that EPA water expert Miguel Del Toral faced retaliation from the MDEQ and management in the EPA once he began investigating her concerns about the quality of drinking water in her home in February 2015.

“I told Mr. Del Toral I did not believe there was corrosion control in the water, provided him documentation about this fact and he verified my findings — and he was furious. Mr. Del Toral questioned the MDEQ, and at first they lied, then later admitted the truth,” Walters said.

She resigned in January following mounting pressure and claims that she covered up warning signs about the severity of the water crisis in Flint.

“Susan Hedman cared more about policy than the welfare of an entire community, while punishing and silencing the one person who was willing to help us,” Walters said.

Rep. Dan Kildee (D-Mich.), who represents Flint, was invited to testify before the committee. During his testimony, he provided a February 2015 memo from MDEQ that informed the EPA that Flint had an optimized corrosion control program to protect against lead contamination when they did not.

“There’s an effort to try to create some false equivalency of responsibility. I’m critical of the EPA in this case, don’t get me wrong,” Kildee said. “I wish that as soon as the EPA discovered that there were problems with the water in Flint, that they would’ve shouted from the mountaintop that there’s a problem in Flint. Instead, they kept insisting that the Michigan Department of Environmental Quality do its job.”

“To hold the EPA accountable — I want to hold the EPA accountable for transparency — let’s make sure that we get the facts right. It was the Michigan Department of Environmental Quality telling the EPA that they had this thing under control, that they were using corrosion control in Flint when they were not. I would have preferred the EPA had let me know, had let the community know that they had this data, and let us force the MDEQ to do its job. They didn’t and that’s their failure.”

Marc Edwards, a professor of environmental and water engineering at Virginia Polytechnic Institute and State University, said this was the third time that he’s testified before Congress about the lax regulation of water quality.

“The agencies involved in protecting children from lead in drinking water in this country — including the U.S. Centers for Disease Control, the EPA, primacy agencies and the water utilities — have proven themselves time and time again unworthy of the public trust. They cannot be trusted to fix this problem,”  he said.

“The EPA wrote a memo that essentially banned that protocol, but they know, as we speak today, water utilities still use that protocol, even after it was banned,” Edwards said. “I believe they are not enforcing the law, they’re not enforcing their own policies and they’ve created this environment in which basically anything goes. … I think the EPA in general cast a blind eye on these municipalities who are not following [regulations],” Edwards said. 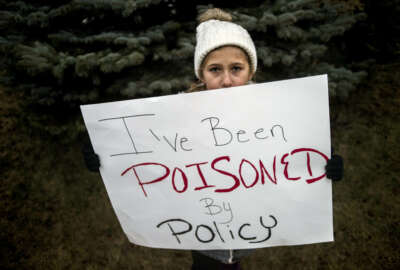