Prime contractors may hold the key to the Pentagon’s lack of visibility into supply chain vulnerabilities laid bare by COVID-19 last year, and House lawmakers are now preparing legislation to address the issue along with other supply challenges.

Prime contractors may hold the key to the Pentagon’s lack of visibility into supply chain vulnerabilities laid bare by COVID-19 last year, and House lawmakers are now preparing legislation to address the issue along with other supply challenges.

The timing positions the recommendations for potential inclusion in the committee’s mark-up of the fiscal year 2022 defense authorization bill, which begins at the subcommittee level in late July.
During an event hosted by George Mason University’s Center for Government Contracting, Slotkin said the panel just briefed its findings and recommendations to Deputy Defense Secretary Kathleen Hicks.

“Our goal was to not create legislation that didn’t work for the department,” she said. “That doesn’t mean they love every piece of it, but we want this to be something that would be helpful.”

Both Slotkin and co-chairman Rep. Mike Gallagher (R-Wis.) noted the extensive volume of supply chain reports in recent years, including the Biden administration’s recent 250-page review of vulnerabilities in key areas like batteries, pharmaceuticals, and semiconductors.

Gallagher said the task force attempted to narrow down what is defined as “critical” for the Pentagon. He mentioned semiconductors, electronic components, rare earth materials, energetics, and active pharmaceutical ingredients as a “starting point.”

The Trump administration also did extensive reviews of supply chain challenges, including a landmark 2018 report on the manufacturing and defense industrial base highlighting “a surprising level of foreign dependence on competitor nations.”

The task force leaders said their report would spill less ink than recent studies and instead feature legislation pushing DoD to treat supply chains as a strategic priority.

“We’re not suggesting we’re going to fix the entire DoD supply chain issue overnight, but we’re going to start to push DoD in the direction of having the right processes in place to identify, assess, and mitigate risks, so that DoD can obtain visibility down multiple tiers in the supply chain, so that we can start to take appropriate action to reduce dependency on China, in particular our defense supply chain, particularly as we consider the potential conventional conflict with China,” Gallagher said.

The group specifically debated to what extent prime contractors should be required to share information with DoD about their supply chains, according to Slotkin. Contractors often don’t know who is in their supply chain, or they choose to conceal it for proprietary reasons.

“I certainly leaned heavily into we can push, this is the moment to push and expect a bit more,” she said. “I think that’s part of the responsibility now for corporations is to know your own vulnerabilities.”

Gallagher said some in the Pentagon and industry gave the task force a “shoulder shrug” when it came to supply chain visibility, suggesting the problem was simply intractable.

“I think what you’re going to see in our final report is the idea that that’s not going to cut it anymore at a time when supply chain vulnerabilities could mean the difference between success or failure in war,” he said.

The task force received multiple briefings from DoD officials on what they do know about supply risks, featuring color-coded presentations where green indicated multiple suppliers, yellow meant just a few, and red was single source, potentially in China.

“There’s a lot of red on some stuff that’s particularly important if we need to go and mobilize for war,” Slotkin said.

The final report will include a section on “reducing reliance on China and other single source countries,” she added.

The Biden administration recently issued new memorandum directing agencies to strengthen the internal agency waiver review processes for “Made in America” requirements, with the goal of minimizing such waivers.

Slotkin praised the memo, although both she and Gallagher said their report doesn’t seek to fix the reliance on Chinese sources by shifting to a U.S.-only framework, as they believe allied countries will play an important role in improved supply chain practices.

“I think it’s fair to say you’re not going to see an overly prescriptive set of solutions on Buy America,” Gallagher said. “You’ll see a respect for the complexity of Buy America and then certainly an attempt to advance the ball down the field, to use a football metaphor, in the direction of a ‘Buy Allied’ framework.”

Slotkin said additional categories in the forthcoming report include workforce and trade skill development, and “using American innovation” to secure supply chains, with a particular focus on rare earth elements. 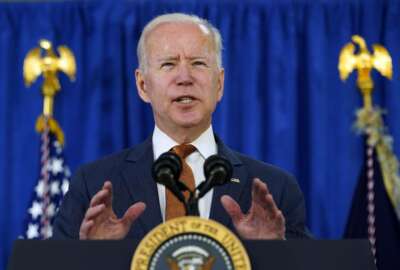 Biden to launch task force on bottlenecks in supply chains