IRS pushes for better government-industry relations amid IT modernization drive

The IRS has several major projects coming down the pipeline, between implementing the new tax reform law and refocusing its efforts on taxpayer services under the Trump administration’s governmentwide IT modernization initiative.

But in order to get the IRS to where it needs to be, the agency is beefing up its outreach to industry partners to ensure it’s getting the latest IT innovations.

Speaking Wednesday at the IRS’ second reverse industry day, an event where the agency hears from contractors about hurdles in doing business with the government, Jeffrey Tribiano, the IRS’ deputy commissioner for operations support, said Congress is looking at proposals for IRS reform, which would make the agency more taxpayer-focused.

“We are fundamentally changing how we provide our services. We are at a transformation stage,” Tribiano said.

On March 22, House Ways and Means Committee Chairman Kevin Brady (R-Texas) told CNBC that Congress would move ahead on a bill to reorganize the IRS. The bill, he added would help the agency implement the tax reform law taking effect in the 2019 filing season.

“We think a new and improved tax code really demands a new and improved IRS. You’re going to see in April a bill moving forward that really begins to restructure the IRS — really focuses it on the taxpayer-oriented organization that we deserve,” Brady said.

According to a draft of the bill released by Reps. Lynn Jenkins (R-Kan) and John Lewis (D-Ga.), the chairman and ranking member of the oversight subcommittee, the IRS would have a year to provide Congress with a “comprehensive customer service strategy.”

The bill would also require the agency to give Congress and the public advanced notice of plans to close any of the 300-plus taxpayer assistance centers across the country.

But in order to get the most out of its deals with industry, Shanna Webbers, the IRS’ chief procurement officer, said the agency needs to communicate that it’s open for business, even to companies that don’t have a longstanding relationship with the IRS.

Harrison Smith, the IRS deputy procurement officer, said one of the reasons the IRS set up its first reverse industry day was to dispel the idea that the agency doesn’t give business to companies it hasn’t worked with before.

“Every time we don’t talk enough to industry when we have the ability to, it means that we don’t get competition, it means we don’t get innovative proposals about how to fix and how to solve the problems that the IRS works through,” Smith said.

In recent years, agencies have turned to reverse industry days to break down some of the barriers that exist between government and businesses.

In a similar effort, the Office of Management and Budget and the Defense Department have carried out “mythbusting” initiatives meant to dispel misconceptions about government contracting.

Improving these public-private relationships and ensuring that companies believe they have a fair shot at winning government contracts, Smith said, is necessary to help the IRS carry out its mission.

“Whatever makes the market more efficient helps in terms of competition, helps us in terms of innovation, helps drive down price, and really gets us to a win-win position. We literally are not funded or authorized to do all the work ourselves. The industry are partners and we can’t do the work without them,” Smith said.

During one of the reverse industry day panels, John Roman, the senior vice president for administration at Huntington Ingalls Industries, said the government contracting process doesn’t allow much time for vendors to bid on a contract.

“It seems to us that you guys are under a microscope all the time. You’re worried about being second-guessed by the [inspector general]. You’re worried about being second-guessed by any other auditor to come along. You worry about all that kind of stuff, and you’re really being, it feels like to us, that you’re being pushed to award something quickly, make sure it doesn’t get protested, and get some price reduction,” Roman said.

He also urged the IRS to hold more one-on-one meetings with vendors to help them better understand what the end user is looking for in a contract.

“The more we understand what you actually want, the less risk there is,” Roman said, adding that the end product would be better off in terms of what the government customer gets.

Webbers said the IRS is also working on an enterprise-wide dashboard that provides visibility across the acquisition lifecycle.

“Right now, in the procurement space, normally you don’t know what’s happening until you get the requirement. At that point, you are near the end of that long process of the execution. So the amount of time that we have is pretty limited at that point to meet the need,” she said. 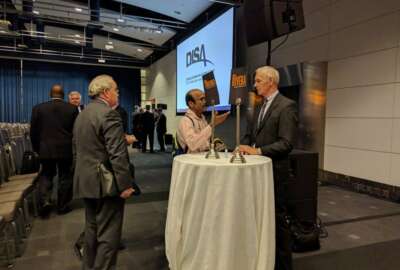