Less money from intelligence contracts to go around

Contractors doing business with the intelligence agencies must deal with a 2021 budget request that’s hundreds of millions of dollars lower than the fiscal year that just ended. It’s hard to find a lot of detail about the intel budget, but my next guest has some insight into it. Bloomberg Government Senior Defense Analyst Rob Levinson joined Federal Drive with Tom Temin for more.

Tom Temin: And Rob, what did you discover in looking at what’s happening in the intel community?

Rob Levinson: Well, the government finally disclosed what the request on the intel budgets are for fiscal 2021, as well as what was appropriated in fiscal 2020. And we saw there’s about an $800 million decrease in the requests for 2021, from 2020. And if you look further back in time, if you look back to 2012, when we see these budgets, we can see that if you factor in inflation, the budgets really haven’t been going up at all since 2012.

Tom Temin: Yeah, so that’s about 10% in dollars below what it was in 2020, what they’re asking for this coming year.

Tom Temin: And Congress doesn’t tend to plus up the intelligence budget when it gets around to actually passing a budget, which it has yet to do.

Rob Levinson: That’s not usually typical. Again, there’s a limited amount of transparency. What’s in that basically, the government only publicizes two figures, there’s what’s called the Military Intelligence Program or the MIP, and the National Intelligence Program, which is called the NIP. And the MIP pays for a lot of the military stuff, as you might imagine, the NIP pays for things like the CIA, intelligence at State Department, as well as some of the DoD stuff that’s in agencies like the National Security Agency, or the National Geospatial Intelligence Agency, but they don’t disclose the detail, agency by agency, and only some members of Congress are really privy to all of that.

Tom Temin: All right. So then what do you think contractors need to know? What do we know that would be useful to them as they pursue business?

Rob Levinson: Well, we know that consistently, and the intelligence community has been public about this, about 70% of those budgets go to contractors in one form or another. And we have to be careful because some people think, oh, it’s all for spy stuff or analysis. And it is some of that, it’s building reconnaissance satellites are paying for analysts and things like that. But it’s also mundane things like janitorial services at the CIA or office supplies, those are also dollars going to contractors. And we again, we don’t know the breakdown of that about what’s going to pure intelligence work versus sort of just general support activity. But basically, contractors need to know that the budget is staying flat or going down in real terms, that’s a tougher environment that they’re facing. It’s not a huge drop, but it is getting tougher and tougher. And you know, there’s only a limited number of contractors that can often compete in this space, because they need the security clearances. Even if you’re supplying, say janitorial services somewhere, you might need janitors with a top secret security clearance because of where they’re working.

Tom Temin: So for example, with the CIA about to sign as far as we can tell a major cloud computing contract or a series of them, then it’s possible to take from that there might be cloud-related services that third party vendors could at least pitch to CIA.

Rob Levinson: Oh, yeah, absolutely. But again, they generally got to be a US company, or a US-based subsidiary of a foreign company, which sometimes is allowed. And they’ve got to have all the people who can do the work with the appropriate clearances.

Tom Temin: And it’s also true that the clearances and the requirements for secrecy vary among the components in the IC, too, don’t they?

Rob Levinson: Oh, yeah. And they’ll vary contract by contract. I’ve seen stuff at the National Geospatial Intelligence Agency, which is based in Virginia, in fact, they’re probably more transparent than most. And they have a lot of unclassified work that they’re doing. And they’re somewhat public about, or work that say, just the secret level, as opposed to the top secret or even special compartmented information level or, you know, Special Access Program. So there’s a wide variety of clearances. And even within an individual agency, they may have work that’s unclassified versus work that’s top secret.

Tom Temin: Because I’ve heard that the NSA is the single most difficult one to get into initially, as a contractor.

Rob Levinson: I think maybe that’s true? It’s a little bit hard to say, but certainly the NSA has extreme amounts of sensitive work. They also probably have one of the larger budgets, they do have a lot of money at the NSA. But yeah, it’s a tough place because of the sensitivity of the work.

Tom Temin: We’re speaking with Bloomberg Government Senior Defense Analyst Rob Levinson. And given that, say, at something like $90 billion or so, the IT budget for the federal government is about maybe 8% of the total discretionary budget. Do you think it’s safe to assume that, of that $85 billion, for IC maybe 8, 9 – maybe a slightly higher percentage of that would nevertheless be information technology?

Rob Levinson: Yeah, my guess it would be a slightly higher percentage of that. Some agencies like the one you mentioned, both the NSA and the NGA – the National Geospatial Intelligence Agency – are heavily IT focused. The NGA is dealing with huge amounts of geospatial data, and the NSA, you know, everything is cyber and online. So I would imagine, particularly in those two agencies, it’s going to exceed probably that 8% or 9% figure and maybe significantly higher.

Tom Temin: So there’s still $85 billion opportunity there. It’s hard to tell what’s addressable by whom, as you’ve pointed out. And so if someone is not doing business with the IC, what are some basic steps they need to take as a company to prepare themselves to at least go for it?

Rob Levinson: Well, there’s two things that I’ve talked about that seem to be successful. One is partner with somebody who’s already in it, find some company that’s doing business in the IC and partner with them in some fashion. And the other one is you need to hire people who’ve worked there, either worked there as contractors or actually worked who have the clearances. But you know, there are some ways – the intelligence community has something called the Acquisition Research Center. And they have an unclassified version of that. You have to apply for a login but basically, anybody can do that, you can see at least the unclassified or sometimes the work may be classified, but at least the the nature of the work or the opportunity, they announce it in an unclassified forum. So there are ways to find out some of what’s going on there. But I really think that partnering with people who are already in the space or hiring people who’ve been in that space are the best approaches, if you haven’t been in that space before.

Tom Temin: I imagine, given the heightened sensitivity of the way the world relations are right now. Not that the intelligence community has ever been easy or relaxed. But do you sense that the cloak of secrecy maybe is a little bit higher in recent years, just because of what we’ve seen, say, with attempts by Russia, Iran, China to interrupt processes within the United States, and not simply gain information from the United States?

Rob Levinson: Yeah, I think there’s some of that. At the same time, I do think the intelligence community, like the rest of sort of the national security community, wants to expand the universe of where it goes for contractors, you know, they recognize that particularly in information technology, there’s a lot going on in Silicon Valley, that may not be with companies that have traditionally done business with the intelligence community, and they want to reach out to them. So in that sense, they want to be a little bit more open about what they’re seeking, and try and ease the way for them to do business. But like you say, there’s another side of this that given the attempts by adversaries to disrupt things like elections and things, that they’re going to be very sensitive.

Tom Temin: And finally, do you have any sense of whether the intelligence community uses other transactional authority (OTA), versus just FAR types of acquisitions? Do we know?

Rob Levinson: We know that it probably does happen. But I don’t think it’s very large. I just saw an announcement actually from the National Reconnaissance Office, the NRO, which deals with spy satellites, and they are just now experimenting with OTA. They put out a requirement as pilot programs. And I talked to some people, and they said that prior to this, the NRO had not used OTAs. So they’re anxious to explore it but I don’t think that the use is widespread yet.

Tom Temin: Any other words people need to know about the IC budget?

Rob Levinson: You know, I would just emphasize that there are opportunities out there, but it takes a little bit more work to go after. And again, just because it’s the IC, doesn’t mean that everything is intelligence related. They need office supplies, they need janitors, they need security guards. And if you can get people with clearances, you can get that kind of work.

Tom Temin: Rob Levinson is senior defense analyst at Bloomberg Government as always, thanks so much.

Tom Temin: We’ll post this interview along with a link to more information at FederalNewsNetwork.com/FederalDrive. Subscribe to the Federal Drive at Podcastone or wherever you get your podcasts. 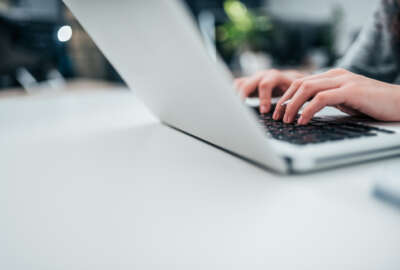 Play spot-a-circle with NGA, get paid!