The longer it takes the Biden administration to get its final fiscal year 2022 appropriation request out, the worse it’ll be for federal contracting. By one account, the final numbers might not gel until February. Our guest says that would have a serious and negative impact on federal procurement, you know, buying stuff from contractors. For more,...

The longer it takes the Biden administration to get its final fiscal year 2022 appropriation request out, the worse it’ll be for federal contracting. By one account, the final numbers might not gel until February. Our guest says that would have a serious and negative impact on federal procurement, you know, buying stuff from contractors. For more, federal sales and marketing consultant Larry Allen joined Federal Drive with Tom Temin.

Tom Temin: And that February prediction is coming from Todd Harrison of the Center for Strategic and International Studies. And could it be that the budget would not come out until deep into the fiscal year, the budget request?

Larry Allen: Tom, it’s certainly possible that we might not get appropriations until February of 2022. That would be unusually late by historical standards. But really not by more recent standards, more recent experience has had us have appropriations come out in February or even later, in two or three over the last half a dozen years. So while that’s a real problem, not just for contractors, but for the government agencies in terms of things like continuity planning, being able to meet ongoing needs, it certainly isn’t out of the question. Here we are now at a time of period in the spring where we usually have a president’s budget request, and it’s not here, it’s even late by late standards. And while Congress is continuing to do the appropriations work that it needs to do, not having that budget out from the President is certainly going to cause some delays. And Todd I think was saying that those delays could really be compounded and we could end up with, in effect, about two thirds of a fiscal year.

Tom Temin: Yes, because a couple of members of the appropriations committees have said they want to do things in a timely way. And they want to have separate bills instead of one big omnibus. And so they are thinking about it, it’s not like Congress is ignoring this. But I guess as a practical matter, without having a line by line request coming in from the administration, then Congress doesn’t really have a departure point to do its work, I think, is what’s going on here. And so everyone might have a gigantic top line figure, but that’s not really helpful for agencies in the appropriation process. They need to know my program, my budget line, my codes.

Larry Allen: Well, that’s exactly right. Without guidance from the executive branch, congressional appropriators are working with very limited knowledge and working they are. So it’s not like they’re standing still just waiting. But even so Tom, not having that specificity from where this administration would like to take it spending priorities, really all Congress can do is either guess or follow on the blueprint that they did in the previous year, which had different administration and different priorities. But they can’t wait until the very 11th hour in order to start the appropriations process. Otherwise, we’ll never get an appropriations measure at all. I do think that we’re going to be looking more at February, some of the statistics and analysis show that if you wait this long for a budget, and you have a very partisan Congress with micro thin majorities in each chamber, that you’re going to have a lot of deal making that has to get done. And the people who hold the ace cards know that and they’re not going to be in any hurry to play them. So if you’re a federal agency hoping for continuity for planning, for being able to start projects next year relatively on time, good luck, because that’s probably not going to happen if you’re relying on appropriated funds. If you’re a contractor, that means that you’re really going to see a very slow start to the next fiscal year on top of what has been a historically slow start for this fiscal year, Tom, leading some people to believe whether or not the federal government market is really turning into a one quarter wonder. That Ride of the Valkyries that we’ve talked about before that comes around in the summertime as we move into fall as agencies have use it or lose it dollars they simply have to get out the door.

Tom Temin: We’re speaking with Larry Allen, president of Allen Federal Business Partners. Yeah, so the danger then is appropriations coming essentially halfway through the fiscal year means no new projects can really get started until that point, and by then agencies that are afraid to start anything because then pretty soon they’re out of the fiscal year and there’s no funds anyway.

Larry Allen: Well, that’s right, they’re going to have to cram an awful lot of government procurement actions into a short period of time. And while there are certainly mechanisms in place that allow for quick allocation of money, it should be no surprise that this is also when errors occur. Think about just trying to get out of your own house when you’re pressed for time. Yeah, that search for the keys can make the difference between stress and not stress and being even later than you already are. So it’s the same sort of thing here. It doesn’t make for good government overall. I mean, there are allowances that you make every four years for new administration or new priorities. So I’m not trying to say that this is totally out of the woods, but even by transition standards, were behind the curve.

Tom Temin: And switching gears here, there is one good piece of news and that is coming from the Technology Modernization Fund overseers last week saying that they’re doing away in some cases with the need to repay the money that is taken from the TMF. Now at a billion dollars, and possibly $1.5 billion, if appropriations for the regular fiscal ever happen. So that eases agencies pressure to maybe take those funds and use them to modernize.

Larry Allen: Tom, this is a, I think, potential good news story in a market where we tend to sometimes be the chicken littles of forecasting, the sky is not always falling. So with the Technology Modernization Fund flexibility, the bottom line is more agencies are going to be able to apply for different types of projects than they were before. I recommend that contractors work closely with their government agency partners on these projects, everybody that wants a slice of the Tech Modernization Fund pie has to make an application. And the best applications I think are the ones where industry and government work together to submit an application on behalf of an agency. But as you noted, we don’t now have to repay everything. Whereas before the Tech Modernization Fund was if you had $100 million out, you had to pay $100 million back. And you had to have a plan for how that was going to happen up front in your application. Now there’s more flexibility, there’s an understanding that while we certainly expect funds to be repaid most of the time, there are going to be some opportunities for either partial or no repayment. And it really speaks to the fact that there’s criticality in some of these systems that isn’t obviously discernible buyer return on investment, but nevertheless, play important roles in the function of agencies.

Tom Temin: And the board did give a list of allowable types of projects that would be funded under the TMF. But that was really such a wide range of possibilities. I don’t think it rules out much.

Larry Allen: Well, they certainly align with the current priorities, Tom, things such as cybersecurity, which I think is the first, second and third government technology priority, I think cloud was on there. So the types of issues and projects that the fund is thinking about supporting shouldn’t come as any surprise to government IT professionals or IT contractors.

Tom Temin: And customer experience was on there, improvement on that, and delivery of citizen services. And of course, cybersecurity relates to that, because you can’t deliver everything if your system is crashed or hacked or somehow compromised by cyber. So yeah, I mean, cyber seems to be the axis around which all of this is spinning.

Larry Allen: It is and I think this administration in particular, Tom, has been very clear that they expect the citizen service, the citizen experience to improve with the investment of technology. So as government agencies move forward, they really ought to be looking on that citizen facing element, not just the internal systems. That’s coming direct from this White House.

Tom Temin: Larry Allen is president of Allen Federal Business Partners. Thanks so much, 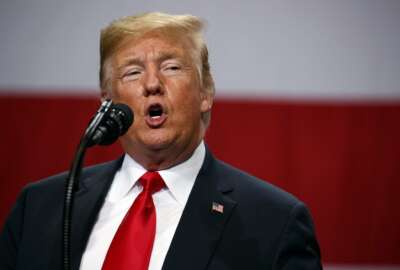