Navy faces protests on contract for maintenance and logistics support

When soliciting bids under a task order contract, the government isn’t obligated to have full-on negotiations. Contracting officers can have interchanges with bidders, but even these have to be done fairly, or else bidder is likely to protest, as the Navy found out recently. Procurement attorney Joseph Petrillo explained the case on Federal Drive with Tom Temin.

Joe Petrillo: Well, good morning, Tom. Here, this is a task order competition, the Navy had a multiple award umbrella contract vehicle, and the contractors got to compete for various task orders. This was a very large task order for maintenance and logistic support for adversary aircraft. Basically, they were keeping the F-5 and F-16 fleet up and running so it could perform training for Navy aviators as adversary aircraft.

Tom Temin: So yeah, these are some older stuff that they wanted to keep going and present exact some cost control on the maintenance required.

Joe Petrillo: Well yeah, although I have to say it was a multi-year task order valued at about half a billion dollars. So this was a very large task order. The evaluation factors were five in number – three of them were pass fail – task order administration, contract experience, and small business participation. So offerors had to get over those three hurdles by passing the evaluation for those factors.

Tom Temin: So there was no grading it was just yes or no on those factors?

Joe Petrillo: On those factors. But there were two more factors where there was going to be a best value trade off. And those two were cost price and program execution. So the Navy was going to figure out what was the best value trading off those two other additional factors. After the evaluation, it awarded a task order to Vertex Aerospace two other offerors protested to GAO. Now, there’s a limit below which you cannot protest a task at GAO, and for defense procurements, that’s 25 million. But this is well over that. So in the midst of that protest, the Navy decided to take corrective action. It did. It did another award decision and reaffirmed the award Vertex. At that point, AECOM protested. And they objected to the award., and they raised multiple issues at GAO. But one issue turned out to be critical. And as you mentioned in the run up to this, it was the issue about the discussions between the Navy and the offerors and whether they were fair.

Tom Temin: And these discussions specifically are called interchanges in a task order situation, they’re not negotiations.

Joe Petrillo: Well, that’s what the Navy called them here. It’s not a term used in the regulations, but it’s an appropriate term. Because when you have discussions or negotiations or other communications between offer ORS under a part 15, classic negotiated procurement, that’s a different type of situation, and that you have specific regulations that set forth procedures here in the task order environment, you don’t have that. But in this case, the solicitation said that those negotiations had to be fair. And I think that’s probably the minimum that would be required in any event. So were they fair? In this instance, there were interchanges with both Vertex and AECOM. In the case of v\Vertex, the Navy said, Look, you failed to fully price out your labor hours. That was a big deal, because that were injured. It’s proposal non compliant with one of the solicitation requirements. So the Navy let Vertex submit a revised proposal to correct that, and they did and they had a significant increase on price, which went up by about $20 million. Vertex also, since it was submitting a revised proposal, changed other parts of its proposal such as program execution, and small business participation. So Vertex got a fairly robust interchange and discussion process with the Navy. In contrast, AECOM had an interchange from the Navy in which they just asked about an unclear element and contract experience. They wanted something clarified. The Navy allowed AECOM to clarify that so they understood that part of the contract experience reference, but it couldn’t change other aspects of its proposal. Now, the significance of all that is when it came down to the award decision, the prices were very close, the price cost evaluation was very close, and they both Vertex and AECOM had an overall rating of satisfactory confidence for program execution. The tipping factor, however, was that AECOMs proposal had something in the evaluation of program execution. It’s not discussed in the GAO decision, but there’s some aspect of that which the Navy felt decreased its confidence in their ability to perform and execute properly.

Joe Petrillo: Well, GAO said, look that was the deciding factor for making the award to Vertex versus AECOM, which were otherwise very closely evaluated. And since that was the deciding factor, and AECOM had never had an opportunity to correct it or revise its proposal, that meant the exchanges with AECOM were unfair compared to those with Vertex, because Vertex was given an opportunity to change something in its proposal that would have made it unacceptable for evaluation.

Joe Petrillo: Right. Well, because this is a situation where there’s not been a final award, the competition is ongoing – there has to be a lot of sensitivity about what information is released in the decision, because it might influence the competition. That being said there’s a fair amount of information in this.

Tom Temin: So the protest prevailed in that Vertex did not get the award and now the whole thing is reopened?

Joe Petrillo: Well, it isn’t clear that the whole thing is reopened. GAO recommended that the Navy reopen interchanges with AECOM, tell it about the confidence decreaser and give AECOM an opportunity to submit a revised proposal to try to make things fair vis-à-vis what happened with Vertex. It is unclear what other things the Navy could or couldn’t do based on the decision.

Tom Temin: Yeah, so the lesson learned here is what then?

Joe Petrillo: Even though you’re conducting a task order procurement, it’s not subject to the classic FAR Part 15 rules, you still need to conduct fair evaluations. In this case, it’s kind of interesting. GAO looked at what the ultimate factors were that determined award and use that analysis to determine whether or not the evaluations and probably interchanges and discussions were fair with your offerors. I’m not sure that an agency is going to know that ultimate result as this proceeds. So it’s probably going to require the agency this decision to have fairly equal discussions with all the offerors as it’s ongoing, because I’m not sure they can foresee which factors are going to be determinative at the end of the evaluation.

Tom Temin: Got it. So yeah, treat everyone equally. And if an issue comes up in a exchange with one, bring it up with the other and then you’ve covered your bases.

Joe Petrillo: Well, yeah, you’ve got to discuss with each offeror that issue that’s relevant and important for its evaluation.

Tom Temin: Joe Petrillo is a procurement attorney with Smith Pachter and McWhorter. As always, thanks so much. 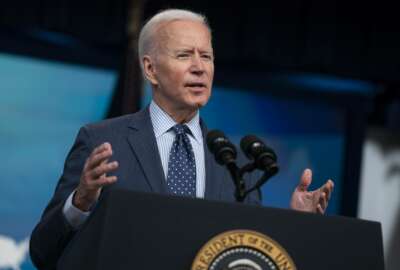 Rep. William Clinger was a giant in federal IT acquisition