Contractors working in federal facilities are under the same orders as federal employees. Get a COVID vaccine or face a regime of having your nose swabbed every week. But agency guidance now in circulation seems to add additional burdens on the contractors companies. Federal Drive with Tom Temin got more from the president and CEO of the Professional Services Council, David Berteau.

Tom Temin: And David, you’ve seen some guidance coming from at least one agency, looks like the NSA, what does it look like out there?

David Berteau: Tom, it’s very confusing, it looks like a mess actually, across the board. The intentions, while not stated this way, are pretty clear. We need more people vaccinated. And that’s the way we’re going to get on top of COVID-19 and get on top of the Delta variant and whatever new variants are coming down the line. In addition, vaccines and vaccinated populations will help reduce the development and spread of new variants, which are clearly our risk here. But the government is not ready to issue a mandate, even for its own federal civilian employees. And so what they’ve done is set up a thing that makes it harder to be unvaccinated than to be vaccinated. Because if you’re unvaccinated, or if you refuse to say whether you’re vaccinated or not, you’ll get into a testing regime. Lots of questions here, and much of the guidance is not really guidance yet, right? It’s press conferences, it’s fact sheets, it’s white papers, it’s FAQ’s issued by a task force unsigned by anybody. It’s a form, that’s clearly just a template. None of this constitutes guidance. For contractors and for contract employees, you have to have a document signed by an official who has the authority to direct you. And if it doesn’t come centrally, as you know, it will come one contract at a time, one task order at a time. That’s a recipe for discontinuity. That’s a recipe for confusion. That’s where we are today.

Tom Temin: Well, that does raise a lot of questions, as you say. What about the idea of self attestation? Which is what they are asking of federal employees. But I guess contractors can do that, too?

David Berteau: Well one of the big questions that has arisen, almost since the beginning of the vaccination process, is how do you exhibit proof that you’ve been vaccinated? You’ve seen these little white cards you get when you get a vaccine. Well those, as we know, are easy to counterfeit, and they’re already for sale on eBay, etc. And there’s no other mechanism for that. So the government’s bypassed that entirely. You don’t have to prove you’re vaccinated, you just have to say whether you’re vaccinated or not. But on the draft form, you are attesting this under penalty of telling the truth, right? And so the government has already said, again in the FAQ’s put out by the Safer Workforce Task Force, that you’d be subject to actions if you lied on the form. For contractors that’s a little bit fuzzier. It depends on a lot of circumstances. And companies, at least if you look at the draft NSA guidance, the companies are going to be responsible for managing this, not the government. So there’s big questions about who’s covered, who gets tested, who manages the testing, which tests are administered. There’s a lot of tests out there, it doesn’t even say PCR tests versus rapid tests. And what happens if you get a positive result? It’s sort of implied that you go into quarantine, but again, no guidance anywhere, and left to its own, everybody will go their own way, which is not going to work.

Tom Temin: We’re speaking with David Berteau, president and CEO of the Professional Services Council. And you also raise a question too, about some employees may work in multiple agencies on different days of the week, or different locations of a given agency. And there’s no real clear answer on what happens location by location. So does that mean, what?

David Berteau: Right, so the administration’s announcement, I’ll just call it an announcement until we have detailed guidance signed by an authorized official, that announcement said it covers on site contractors. Well there’s no good technical definition of what’s an on site contractor. Is that five days a week at the same desk, at the same location? Is it somebody who goes to multiple locations, multiple times. An awful lot of the work that we have done now — touch labor work that you can’t do remotely — does depend on the location, if you’re doing maintenance, you’re going to go where the maintenance is needed, and you may not know at the beginning. We had one company that told us they’ve got a team that’s going to 15 separate installations over the next two weeks, and they’re going to have to be on site at each one. Now maybe they’re a visitor. Do they sign 15 attestations? If they have not vaccinated, do they enter 15 different testing programs? None of that’s been answered yet.

Tom Temin: And the other question is when this is all going to happen, because there’s no date anywhere, this is when agencies shall reopen. They only had a month ago to submit their plans for what they call reentry and post reentry, I’ve never been able to understand that phrase, but we don’t know, Sept. 1? Sept. 27? Oct. 15? There’s no real definitive time when the administration expects people to be back, vaccinated or otherwise.

David Berteau: Obviously there is no time, but obviously there is a need to do it sooner rather than later. We had, I think, last Friday over 250,000 new cases reported. So, it’s not like we can sit back and relax and wait. In addition, of course, this covers federal civilian employees, and you’re covering this elsewhere in your program over the course of time, but these are subject to collective bargaining agreements. And you already have some federal unions have raised concerns about this. For federal contractors, the question has come up of how does this affect your own workforce? How does this affect your ability to recruit and retain workers? Especially if costs are not covered, which is the implication of the NSA guidance. The government’s not going to reimburse you for the cost of testing, the government’s not going to reimburse a company for the time that employees spend testing, and in particular, not going to reimburse you if somebody has to quarantine and can’t perform their work. Well, this is going to be a real burden, especially on smaller companies that may not have the resources to pay people for long periods of time. All of this is kind of a way to get companies to act as a surrogate and mandate vaccines, even though the federal government’s not ready to mandate vaccines yet, even for its own workforce. The question is, will people quit if you do that? We don’t have a workforce that has excess capacity. Every single company that’s a member of PSC has vacant billets that they are having trouble filling. If you make it even harder to recruit and retain the workforce, nobody benefits from this. So we’ve got to get the vaccine under control. But we’ve also got to continue to be able to do the work.

Tom Temin: And getting back to that National Security Agency guidance that says it intends to use the information submitted into our human management resources system, and that includes contractor information, will be in the agency’s HR system, which seems a little odd.

David Berteau: I think it’s unprecedented, yeah, and with no thought about, what does this mean for managing data? As you well know, one of our biggest hacks, right, was the 2014 OPM (Office of Personnel Management) data hack of all the security clearances for both government and contractors. We’re still living with the repercussions from that. Lots of lots of questions that still need to be answered here. Companies need to know what to plan for and how to execute.

Tom Temin: All right. David Berteau is president and CEO of the Professional Services Council. Thanks so much.

Federal contractors who don’t get vaccinated can anticipate business complications 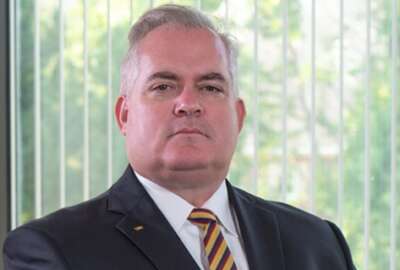 What would happen to the federal employees who resist a vaccine mandate?