For federal contractors, 2021 comes to an end with no appropriations for 2022 until halfway through the fiscal year. This as they deal with a flurry of head-spinning executive orders from the Biden administration. Stephanie Kostro, executive vice president for policy at the Professional Services Council, joined the Federal Drive with Tom Temin to provide a summary of the issues.

Tom Temin: Stephanie, what’s your basic assessment of how things are looking right now? It’s kind of uncertain, isn’t it?

Stephanie Kostro: So as we look back at 2021, and try to characterize exactly what’s been going on in the in the government services, contractor space, it’s been, as you said, a flurry of activity. You know, it’s been notable that we, again, are dealing with continuing resolutions, and we can talk a little bit about the impact of those in practical terms. But the series of executive orders that the Biden administration has signed out really highlights that, for contractors at least, we need to keep our eyes on what exactly is coming out of the White House, as opposed to what’s going on on Capitol Hill. And to be honest, the flurry, as I’m just going to continue to use that word of is unprecedented in modern presidencies. You know, President Biden has signed out no fewer than 76 executive orders, far outpacing the last five presidents and what they’ve done. And so as we watch what will impact contractors, the answer is many of them. They are taking action through executive orders that would otherwise go through legislation, and we are racing to catch up.

Tom Temin: Yeah, and this as all of these executive orders come out. And now that there’s a law now to review the CMMC, the certification program for cybersecurity maturity. I mean, there’s a lot going on. What’s it like for contractors to deal with all of the policy reversals? I guess you could say they had to deal with them when Trump came in to reverse the Obama ones. Now, there’s a reversal of the reversal going on, on many fronts.

Stephanie Kostro: It is a bit like watching a tennis match where it goes back and forth very, very quickly. You know, we’ve had, for example, executive order 14055, which is about non-displacement of qualified service contract workers, which was an Obama-era initiative that the Trump administration reversed. And now the Biden administration is putting back into some form, not exactly the same as President Obama’s form but some form. And as we watch this, we wonder what does that bode for the future in terms of does this tennis match continue every time a Republican versus a Democratic administration takes over. We don’t fault at all the Biden administration for wanting to protect workers. A lot of the executive orders that are of high interest to us within the services world deal with protecting workers, and that is the $15 minimum wage requirement for federal contract workers. It is looking at this non-displacement and there is a probably a better way to do this, and we’re looking forward to the comment period on this non displacement executive order. But there are also some that are not a great fit. For example, there is an executive order on Buy American Act requirements, which traditionally do not apply to services contracts, because it’s very difficult to say whether somebody is, you know, a U.S. entity versus an individual person, and where that work is being done. The idea, though, is they are contemplating applying Buy American Act requirements to services contracts, and that to me is where, you know, common sense should hopefully win the day.

Tom Temin: What about the level of small business contracting required? I mean, that’s more of the government’s problem than the industry’s problem. But the government is finding the companies aren’t there that they need to contract with in terms of numbers to being demanded for, for small business contracting. How does industry deal with that? You could splinter up companies into three different companies — and all three not very efficient, really, even though the numbers would look good.

Stephanie Kostro: Again, this is this is a little bit of a tennis match or a pendulum swing, right. You know, you’ve got small companies that you highly value for their innovation, their agility, their ability to respond quickly and well to contract requirements. And then once they graduate into medium-sized companies, they are sometimes, through mergers and acquisitions, no longer medium size but are sort of subsumed into a larger company. A lot of the Biden administration push has been for the use of small businesses. But you’re exactly right, we need to have a larger pool of small businesses that can be responsive to what the administration is trying to do. One aspect that I applaud is the administration is looking at ways to diversify the small business pool through diversity, equity, inclusion and accessibility — or DEIA. What that means, in practical terms has yet to be seen. But we are watching that space carefully, getting companies that might not normally be federal contractors interested in the federal marketplace. And I think if that is successful, it could really introduce additional innovation to this market space.

Tom Temin: We’re speaking with Stephanie Kostro. She’s executive vice president for policy at the Professional Services Council. And we should point out you’ve done a count of executive orders, by the way. So far, President Biden as of yesterday had signed 76 of them. By comparison, the Trump administration signed 55 a year on average, and the Obama administration 35 a year on average. So at this pace, it’s going to really outpace pretty much all the recent presidents. But I wanted to get back to the issue of the CR. And I mean, there’s a real issue here. The money is flowing, so existing contracts can be funded. But this idea of innovation is pretty hard to get underway, isn’t it, when there’s no new money for new programs until halfway through the fiscal year?

Stephanie Kostro: I suspect your listeners are broadly educated on what exactly a CR means. But for those who are new to continuing resolutions, it basically means you can have no new start programs, you can’t actually retire existing programs. It means that whatever was in place at the end of the last fully funded year is still the case. And we are now working under our second CR. The first one expired in December, the second one that will expire here in February, and basically no new starts. How do you get, how do you access innovation, particularly in high-tech areas where you see rapid, rapid development and prototyping? As you move forward, working under a CR really damages a lot of the innovation and the forward thinking. You know, I think it was my boss PSE President and CEO, David Berto, on a recent show of yours, Tom, that said, China is not waiting for us to have a budget resolution. China and others who are potentially are trying to undermine what we’re trying to do in the world as a country, they’re not waiting for us to have a full year appropriation. They are taking action right now. And the fact that we can’t seem to get an FY22 appropriation across the finish line really does no help to our standing in the world.

Tom Temin: And as we approach the end of 2021, and we have this omicron breakout with some huge numbers, although maybe somewhat less illness, does it feel like the vaccine mandate question for at least in the professional services area is pretty much settled matter, because everybody’s vaccinated except for that 1% that have this or that objection?

Stephanie Kostro: As you will recall, Tom, the first deadline has already come and gone. It was revised for contractors to be fully, federal contractors to be fully vaccinated now by January 18. That means two weeks after your final dose, either the second of a two-dose vaccine or your first dose of Johnson & Johnson — first and only those of Johnson & Johnson, I would say, you know, in talking to government contracting officers, that is still the date they have in their minds. There is an injunction nationwide enforcing this clause within contracts. But you know, we don’t offer legal or accounting advice as a trade association, but what we do offer is our perspective to service contract companies. And that is to say, January 18 is not moving. Whatever the courts decide, they can also change their decision on a dime. And so, you know, until that date changes, that’s the date you all should be aiming for. And you’re exactly right, those contract workers who would have otherwise been vaccinated are vaccinated. It is really the folks who feel very strongly about not being vaccinated who are remaining. They are in the vast minority, but they do exist. And for some companies, it is not a minority of their workers. For some smaller companies, as you mentioned earlier, they they’re the ones who offer innovation. Sometimes their workers, I can think of a few cases where they don’t want to get vaccinated, and it’s going to be an existential problem for those companies.

Tom Temin: All right, so get Johnson & Johnson followed by a shot of Johnnie Walker, and then maybe you’ll be able to figure all of this out. And a final question I wanted to ask you about something you’ve commented on, and that is the government-wide acquisition vehicle as something the government is increasingly favoring to use to buy stuff. But the record of getting these things done and finished without a flurry of protests is not very good lately, is it?

Stephanie Kostro: Not at all. So as you mentioned, we’ll call them GWACs, the government-wide acquisition contracts. GWACs seem to be an instrument of choice for many agencies. But let’s take two recent vehicles. One is the CIO-SP4, which is coming out of National Institutes of Health. That had proposals due back in August, and they just released a new amendment that can change some teaming arrangements. And some packages or proposals that small businesses are offering, or mentor protege teams are offering, that is a little bit of a shock to see an amendment this long after the proposals were due. And that doesn’t bode well for other vehicles. For example, GSA is planning to release requests for proposals for their Polaris vehicle here in January. The first out of the gate will be small business and women-owned small business, followed by some other RFPs. But they’ve received thousands of comments since they released their draft RFP. To me that indicates their final request for proposal will be very different from their draft. And that’s a problem for contractors. How do you plan against that? How do you decide on your teaming arrangements when you think the final request is going to be very different from the draft? And so this is putting contractors in a very awkward position. This happened with CIO-SP4, which is why I mentioned it earlier. It’s happening again here with Polaris, and we are trying to work with GSA and others to figure out what changes are in the offing so that we can support service contractors who want to bid on this, but don’t know now if they can.

Tom Temin: Well, they said it’s good to live in interesting times, and I guess we do. Stephanie Kostro is executive vice president for policy at the Professional Services Council. Thanks so much. 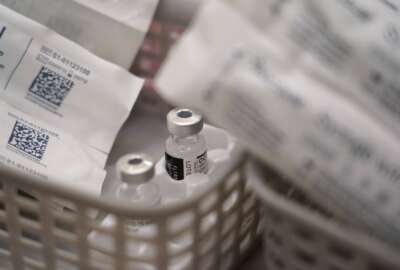