For contractors, the wait-and-see mode for the vaccine mandate keeps rollin’ along

The vaccine mandate for government contractors has been in limbo for a couple of months since an appeals court decision limited the scope of a nationwide injunction on the mandate made by a lower court. Now the Safer Federal Workforce Task Force has finally updated its website regarding enforcement of the mandate. The main takeaway, there is...

The vaccine mandate for government contractors has been in limbo for a couple of months since an appeals court decision limited the scope of a nationwide injunction on the mandate made by a lower court. Now the Safer Federal Workforce Task Force has finally updated its website regarding enforcement of the mandate. The main takeaway, there is more guidance to come. For what that means, Federal News Network’s Eric White spoke with attorney Matthew Haws, a partner at Jenner and Block, on the Federal Drive with Tom Temin.

Matthew Haws: So the big news last time we spoke was that the 11th Circuit Court of Appeals had entered its judgment in the appeal of the Southern District’s nationwide injunction of the vaccine mandate. So that injunction was the broadest injunction that had been issued. It made things a lot simpler for contracting officers and for contractors, in that we knew that anywhere in the country, the vaccine mandate would not be enforced. The 11th circuit decision upheld the injunction, it found that President Biden did not have the authority under the Federal Property and Administrative Services Act or the Procurement Act, to issue that broad of an injunction. But it narrowed the scope of the injunction. It held that it shouldn’t be a nationwide injunction. But instead, it should only apply to the handful of state governments that brought the case. And then to an industry group, the Associated Builders and Contractors, that also joined the litigation. So that decision left us with a lot of uncertainty about who would be covered by the injunction. We then had a patchwork quilt of different court injunctions that covered smaller geographic locations, smaller groups of plaintiffs, that left a lot of government contractors not subject to an injunction anymore. So in the wake of that decision, contracting officers, government contractors, were left with a ton of uncertainty. And everyone looks towards the Safer Federal Workforce Task Force website for some guidance. We really didn’t get a lot in the immediate aftermath of the decision. They moved around, reformatted some things but kept the wording the same, leaving folks to try to guess if that was intentional, or was signaling. Then last week, we finally got some clear guidance, although still a bit of dramatic foreshadowing. So here’s what happened last week; two things. The first is probably only interesting to legal nerds. But there was a procedural matter in terms of appellate law, that meant that even though the court decision had been issued a couple of months ago, it wasn’t actually entered as a judgment until last week on October 18. And that’s because the government was a party and they actually get a longer time period than a private party to ask for a panel review by the entire 11th circuit. So it was only last week that that time period expired. And the decision of the 11th circuit from back at the end of August was actually entered as a judgment as an order from the court. So that means that that’s when the nationwide injunction was technically lifted. Well, in anticipation of that we actually did get a pretty substantive, thorough update on the task force website. And they said, three things should be expected. Three new guidance documents on how the mandate will be enforced as a result of the 11th circuit’s opinion. That said, first OMB would issue guidance to agencies on how to comply with current injunctions, and whether to include the clause enforcing the COVID mandate in new solicitations and contracts. It said that the task force would issue a substantive update to the COVID-19 safety protocols that will be required by contractors. And then third, that OMB would issue guidance to agencies on the timeline for enforcing the clause that points towards the workforce task force guidance when it’s already present in a contract.

Eric White: So I want to make sure that I just have this correct. So the clause is saying that we’re going to have enforcement in certain states, but not overall to the entire federal contractor workforce. And so this is the clause that they’re referring to, or is the clause meaning something else?

Matthew Haws: Yeah. So, as you may recall, this has not been a typical rulemaking. The rulemaking was expedited a bit and what actually happened is that they issued a clause that is inserted into contracts. That’s what creates the trigger for contractors. But all the clause really does is tell the contractor to go out and comply with what is on the Safer Federal Workforce Task Force website. So if you’re a contracting officer, you’re thinking in terms of do I need to put this clause in a solicitation in a new contract? If you’re a contractor, you’re looking for that clause in a solicitation in new contract. Because that’s what starts the ball rolling in terms of your obligation, but the substantive obligation isn’t in the clause itself. It’s on the workforce task force website.

Eric White:  And what can you tell me about the timing of this? It’s kind of an interesting point to do this, almost as if, you know, people are already kind of have contracts on their books for the following year. What does that mean? What were they trying to say by issuing it now?

Matthew Haws: Yeah, I think there’s a lot of interesting questions about the timing. So you’re certainly right, that a lot of contracts that go out at the end of the government fiscal year. We’ve had, obviously, government priorities across a range of issues. All of that is harder when you have this sort of uncertainty. Contractors don’t know how to price, how to plan. And so I think thereare  probably was some concerns about the uncertainty that this clause hanging out there was creating, and they wanted to give some clear guidance, both to the contracting officers, but also to contractors on what to expect, certainly in the near future. Obviously, the other timing issue is that everything keeps changing with COVID. It’s a it’s a moving target. We know we have new variants, they’re working on new vaccines, we also have changing public perception of vaccines, we’ve got a more vaccinated society now. So things look very different than when the workforce task force guidance first came out last year. And I think that’s why they wanted to take a step back to  have a chance to reevaluate the substantive protocols that will be required. That’s obviously the most interesting thing here is what they’ll actually do, will they remove a vaccine mandate, maybe just keep some other mandates about testing or about work, work force, spacing, or monitoring? It’ll be very interesting to see what they do in terms of the substantive requirements.

Eric White: You said that they did this in order to clear up some uncertainty. Asking your opinion now, did they do that? Does this help folks that you’re working with understand what they’re going to need, at least in the near future? As you know, things like you said, are still kind of getting settled out?

Matthew Haws: Yeah, it absolutely does. Obviously,  all eyes are glued to see what the next update is. But for the time being, we have a clear statement. And I should say that OMB did come out with its guidance, that first piece of guidance that was foreshadowed by the task force, OMB did come out with its guidance, and it told federal agencies not to include the clause in new solicitations or contracts and not to enforce it where it appears. So for the time being, everyone, government contracting officers, government contractors themselves, has some real certainty for the first time about the state of play. I think that the other little example of that certainty that is actually provided by this guidance is that the prior website guidance had a little bit of a cryptic statement, that the clause would not be enforced, unless an agency provided notice that it would enforce it. It was a little bit unclear what that meant. Could an individual agency decide to enforce it? We saw for example, NASA seemed to be very aggressive in enforcing this clause. So could they on their own, decide to enforce the clause if it was in a contract? This latest guidance from the taskforce makes it clear that they’re going to have a unified approach and agencies should not go out on their own and decide to start enforcing it. So yeah, a positive development, I think, in terms of clarity, certainty, predictability, both for government contracting officers, also for government contractors.

Eric White: And just a curiosity point here, about the enforcement part of things. Are contractors worried about how the government is actually going to go about that process? You know, we’ve all submitted by now to either fly somewhere or something or vaccine cards, but, you know, those can be easily gotten anywhere. If you really wanted to fake it, you probably could. Are they worried about the feasibility and just how far the agencies are going to go? To prove that your workforce is vaccinated if it comes to that?

Matthew Haws: So the earlier substantive guidance did provide some information on the sort of record keeping that contractors needed to have for these vaccines, I don’t think there was as much concern about that, at least then as there was about the overall workforce issues that we’re all so familiar with, by this point, you know, folks who really don’t want to be vaccinated, who are threatening to quit their jobs, obviously, at a time when it’s hard to find labor. And we’ve got lots of urgent needs, particularly in manufacturing. So it was really that challenge contractors being squeezed from every direction. Now, of course, we’ve added inflation only making matters worse, so many things that contractors are trying to deal with as they work to fulfill government orders. I think the takeaway here is that everybody’s going to keep paying attention to the Safer Federal Workforce Task Force they’ve ensured that we’ve got a bit of a cliffhanger here and we’re all going to be refreshing that website quite frequently to see when the new guidance comes out.

Eric White: A little bit more wait and see and you’re standing by your phone I imagine, waiting for the call and ready to go out when it comes.

Matthew Haws: Absolutely. I’ve got a whole list of clients ready to call me as soon as it drops.

Tom Temin: Matthew Haws is a partner at Jenner and Block. 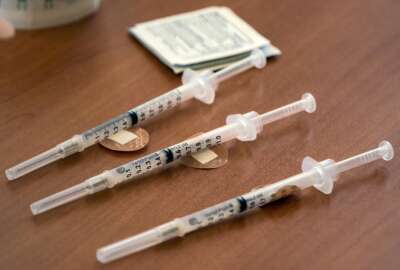 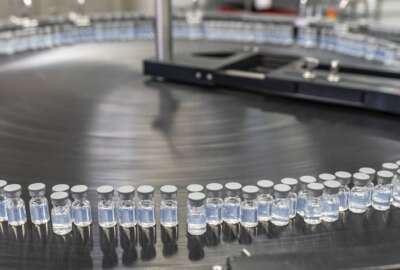 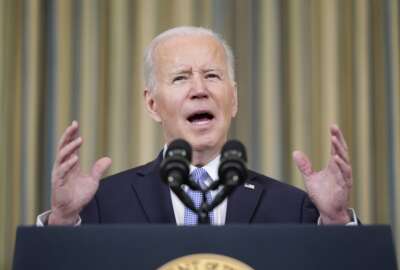