The Defense Department’s ambitious plan to completely revamp its household goods moving system appeared to have finally surmounted its final legal hurdle this week with the passage of a deadline that would have given losing bidders one last chance to challenge the multibillion dollar procurement.

The Defense Department’s ambitious plan to completely revamp its household goods moving system appeared to have finally surmounted its final legal hurdle this week with the passage of a deadline that would have given losing bidders one last chance to challenge the multibillion dollar procurement.

Under federal court rules, American Roll-On Roll-Off Carrier Group (ARC) and Connected Global Solutions (CGSL) had until Tuesday to appeal an earlier ruling that upheld DoD’s $17.9 billion award to HomeSafe Alliance. Neither of the losing bidders opted to do so, leaving the department with a clear path to begin implementing the nearly decade-long contract in 2023.

Until October, when DoD received a favorable decision from the U.S. Court of Federal Claims, U.S. Transportation Command’s Global Household Goods contract had been tied up in litigation for more than two-and-a-half years. Under the sweeping new contract, HomeSafe will take over responsibility for every military move around the globe, replacing the brittle, ad-hoc system in which DoD contracts with individual moving companies each time a servicemember is ordered to a new duty station.

In his October ruling, Judge David E. Tapp found that while the procurement process up to that point had been less than ideal, none of the legal arguments ARC and CGSL mounted in their bid protest lawsuits were sufficient to overturn the award to HomeSafe.

“’Perfection is the enemy of progress,’ an adage aptly describing many aspects of the government procurement process. The search for a perfect procurement, proposal, or even performance would be in vain. Arbiters are tasked with deciding whether protested procurements pass muster; accepting less violates the law and disregards notions of transparency and fairness. Requiring more is likewise infeasible; it impairs government agencies, awardees, and ultimately taxpayers,” Tapp wrote. “After considering [the procurement’s] litigious history, as well as the litany of arguments put forth by the parties, the court finds that the parties have not met their burden to justify disturbing the award.”

A redacted version of the decision, released in November, revealed that HomeSafe’s bid was a middle-ground offer in terms of price. ARC’s proposal would have cost $19.5 billion and CGSL proposed a $17.7 billion approach. But the losing bidders’ arguments centered largely on issues other than cost, including allegations that TRANSCOM had held unequal discussions with bidders, gave improper credit to some aspects of HomeSafe’s proposal, and made arbitrary decisions about which proposal was the best value to the government.

In the 27-page opinion, Tapp found that none of those arguments were persuasive.

“Plaintiffs have not met their burden to show that the GHC was awarded arbitrarily, capriciously, or contrary to law. Thus, the Court declines to disturb the award to HomeSafe,” he wrote.

The GHC concept calls for HomeSafe — a joint venture between KBR and Tier One Relocation Services — to handle all contracting with individual moving companies around the world. Defense officials have long believed that centralizing those subcontracting relationships under a single, professional logistics company would drastically improve its ability to forecast and manage supply and demand in the moving industry.

In addition, HomeSafe will become the technology provider for virtually the entire military moving process and handle the customer service process for military members, including with a new customer-facing mobile app that will help manage their entire moves, from the time they start assessing the weight and volume of their belongings to the final delivery at their new duty station.

In a interview earlier this year with Federal News Network, Al Thompson, the company’s CEO, said HomeSafe also intended to provide its new technology platform to the thousands of moving companies who handle servicemembers’ shipments. One reason: the company wants to use AI and other technologies to gain better visibility over demand in the moving system, and use the existing capacity more efficiently.

“A local mover might need 100 people on Tuesday and 20 people on Thursday, but they oftentimes don’t become aware of that soon enough. So when they need to peak their workforce, they’re scrambling, and perhaps can’t get the people on board,” Thompson said. “So I think through this integrated solution, they’re going to know with appropriate lead time what their workload requirements are, and I think that’s going to really help them have the appropriate staffing on the day at the location where it’s required.”

Defense officials have said they plan a gradual implementation of the new contract in 2023, and the changes will not begin in time for the peak summer moving season.

Starting in October, TRANSCOM plans to start transitioning from its legacy moving system to the GHC contract, with about 25 percent of moves during that month happening under the new system, all of them with origins and destinations in the continental U.S. By summer 2024, DoD hopes to have the contract fully implemented for all worldwide moves. 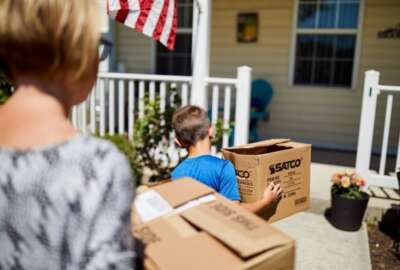