What does beer and federal IT mergers have in common?

Views from the Corner Office is designed to talk to the private sector leaders that influence and impact the federal market. The goal of this monthly discussion is for federal executives, lawmakers and other industry experts to gain insights and a better understanding into the trends, the challenges and the evaluation of the technology, acquisition and leadership in the federal market by the executives who lead the federal practices of government contractors.

Views from the Corner Office is designed to talk to the private sector leaders that influence and impact the federal market. The goal of this monthly discussion is for federal executives, lawmakers and other industry experts to gain insights and a better understanding into the trends, the challenges and the evaluation of the technology, acquisition and leadership in the federal market by the executives who lead the federal practices of government contractors.

Mehul Sanghani, the chief executive officer and founder of Octo Consulting, sat down with Federal News Network’s executive editor Jason Miller in December at his office in Reston, Virginia.

MS: Yeah, absolutely. I think if you look at it from the macroeconomic perspective, you look at the budget cycles, and I think we were in a period of significant belt tightening during sequestration. We had things like lowest price technically acceptable (LPTA) sort of rear its head, and I think for high-value contractors, like my firm, that was particularly challenging, a challenging environment to sort of differentiate your solutions. But I think what we have now—it doesn’t matter what administration—is a budget of political priorities and this administration has certainly laid one out. Its blueprint and political priorities are improving infrastructure on the civilian side and improving our defense posture are significant priorities. We have a two-year cycle now where we have significant budget visibility.

JM: Can you put a finer point on budget certainty and give me a better example of what it meant for Octo?

MS:  When you look at it just from an internal operations perspective during the last couple of years prior to having a greater budget certainty, we responded to a lot of requests for information (RFIs), and I think that is a market research mechanism for the government to understand their requirements going forward, but also to gain an aperture for how they might solicit the need for those services going forward. What the demand is. And there were a ton. We felt a ton of RFIs, but not many of those, not enough of those were really translating into real opportunities for us to bid. And so, we spent a lot of time and energy responding to that type of market research, but not having enough of it translate into the funnel into specific opportunities, actionable opportunities for us as a firm. From an internal operations perspective, from a vendor perspective, how that can be challenging. You end up chasing your tail a little bit.

RFIs, love them or hate them?

JM: I’ve talked to several vendors, some hate RFIs and some love RFIs. What’s your take on RFIs?

MS: Well, I think you have to be judicious. We certainly take a look at the RFI and look at its propensity for being able to turn it into an actual opportunity. There are a number of different dimensions you can look at an opportunity like that. Obviously there’s the standard dimension of  does it fit what you do? Is this an agency that is a priority for the services that you want to try to offer? We look at it through a number of different lenses and then try and prioritize whether it’s a good use of our internal time and energy. Conversely, you can also exhaust a lot of internal resources and you can waste a lot of money pursuing opportunities.

There’s certain opportunities that we’ve been pursuing in our pipeline that have issued now they’re now in their third or fourth RFI. Not only is there fatigue on our part, but I think there’s certainly some internal questioning of whether that’s a good use of our time, effort and energy. Is this really going to turn into an actionable target? So I can certainly see it from both perspectives. And so in those cases, customer intimacy, being able to understand what the customer’s intent is, and oftentimes I believe that’s also a challenge within the acquisition community is having that line of communications open with the vendor community to adequately express intent. There’s certainly still a lot of fear within the contracting community that if they talk to the contractor community, that in and of itself offers an equal advantage when in effect all contractors are looking for is better visibility in the intent. I think with better visibility and intent, we can respond not only more appropriately, but we can apply resources to the right opportunities to.

What does best-in-class really mean?

JM: What are some of the trends you’re seeing whether just from the world you live in, in terms of the services you’re providing or just from where you sit as a contractor?

MS:  I think what I found interesting is the move toward best-in-class (BIC) contracting vehicles. I think that has the propensity to really shape how the market acquires things, the IT category management approach to how things are bought that GSA has largely been spearheading. I believe some of that is still in its nascency, but they’ve certainly made some progress. I think those are significant trends because it can shape, from a strategic sourcing perspective, how goods and services are acquired. But I think it also puts more onus from a responsibility perspective on those  that oversee those best-in-class vehicles because they certainly can wield a lot of power relative to who is going to have access to the key vehicles that are going to be the sources of supply.

MS:  Now, I’m irritated by it as well. I’ll go ahead and say that I think perhaps the most frustrating thing when we look at opportunities that we’ve been pursuing where we have, perhaps even longstanding relationships, it is oftentimes arbitrary how some of the decisions are made relative to the vehicles agencies choose. And now you attach an additional policy relative to vehicles being named best-in-class. I’ll use the example of Alliant 2. I think that has been deemed the best-in-class vehicle. We just missed the cut on that vehicle and that’s a 10-year IDIQ contract. Certainly, GSA has been open about on-ramps that asset and certainly we were looking forward to participating in that, but certainly frustrating for us not to have been a part of that.

What do beer and federal M&A have in common?

JM:  Where do you sit in that mergers and acquisitions world? Have you done some mergers or acquisitions and how do you see that affecting the federal market?

JM: Give me a sense of what, how you see the M&A activity affecting the federal market?

MS: I know that this is going to sound like a standard answer, but I see tremendous opportunity with that. I think what you’re seeing right now is effectively almost a Walmartization of federal IT. You have these large aerospace defense behemoths and they’re looking for scale. You see that in the Engility buy. You see that in previously the Leidos acquisition of the Lockheed Martin IT business unit and you see that in the merger now of GDIT and CSRA on the heels of CSC’s merger with SRA. So it’s clearly a signal to the market that they’re in search of scale, and being able to look at when you’re looking for scale at that level, you’re looking for cost efficiencies. With that Walmartization of IT, what you’re going to see is that there’s going to create a tremendous vacuum and a need for mid-tier providers like Octo.

One of the things that I’ve done at our all-hands meetings is point to the parallels of what we’re seeing now in the aerospace and defense space and what you saw in the beer industry and the beverage industry. You have the Millers and the Budweisers consolidating large multinational, behemoths. You saw them looking for scale and cost efficiencies. And that created the microbrew movement. It created the need on the part of the consumer to have other options besides just the Walmart’s or the large Miller and Budweiser brands. You saw some of the microbrews become established midsize companies and almost large companies their own right, like Samuel Adams. And so I think the parallels are striking. It’s certainly a referential example that folks that like to indulge certainly can relate to and I think it’s particularly apt for what we’re seeing in the market here today too.

A member of Hokie nation

JM: This is my favorite part of the show. Tell me a little bit about you outside of your normal work day.

MS: My parents growing up were entrepreneurs. They owned a small mom-and-pop motel in Blacksburg, Virginia. So I learned a tremendous amount just watching their sweat equity they put in into building their enterprise. They really didn’t have a staff in operating that motel. They were the maids, the desk clerks, and my sister and I operated every aspect of that property. So it was literally a crash course in MBA. I went to Virginia Tech and I’m an avid football fan. I have the privilege of serving on the board for my alma mater, Virginia Tech and was appointed by the governor four years ago and I was recently reappointed by Governor Ralph Northam (D) just this June. So in terms of volunteering, there’s no better way to volunteer your time then to have it associated with something that you’re extremely passionate about. So having grown up in the town, having met my wife at the school, having graduated from this school and now having the trials and tribulations of being a diehard fan, that’s a big part of who I am, but it’s also a big part of where I like to spend my free time. 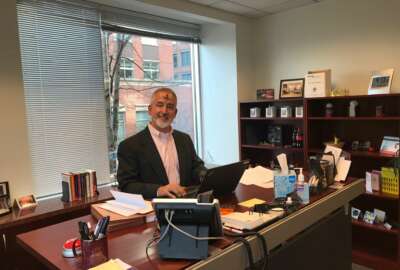 RFIs are futile and other challenges with government, industry communications 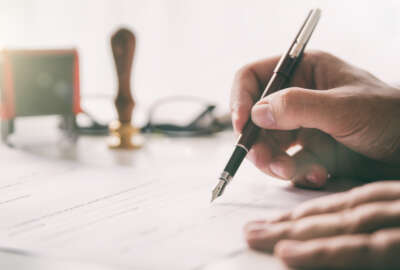 Changes are coming to professional services thanks to contract management