This content is provided by Community Health Center, Inc.

This week Mark and Margaret speak with Dr. Eric Topol, Director of the Scripps Research Translational Institute. Dr. Topol calls drug maker AstraZeneca’s recent controversial under-reporting of complete safety data to US regulators for its COVID-19 vaccine ‘disturbing’ and ‘unprecedented’ in his clinical trial career. He calls the rapid development of highly successful and effective COVID vaccines one of biomedicine’s greatest achievements and predicts the pandemic crisis will pave the way for more remarkable scientific breakthroughs, and a greater opportunity for the growth of personalized medicine via smartphones.

Learn about the hosts 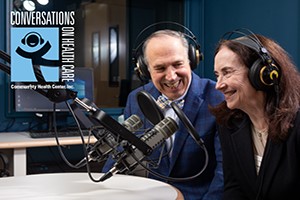 About Mark Masselli and Margaret Flinter

Mark Masselli is the President/CEO of Community Health Center, Inc., Connecticut’s largest and most comprehensive provider of primary health care services for the uninsured and underserved. CHC is located in over 203 cities throughout Connecticut – serving 145,000 patients statewide. Providing medical, dental and behavioral health services, CHC is a nationally recognized innovator in the delivery and the development of primary care services to special populations.

Mark has played an important leadership role as a founding member of many health and human services initiatives in Middletown, including New Horizons Battered Women’s Shelter, Nehemiah Housing Corporation, and Oddfellows Youth Playhouse. In addition to local issues, Mark has worked on a range of international human rights issues. He has worked with His Holiness the Dalai Lama and has traveled in Tibet, Nepal, India and China working on the issues facing the Tibetan people. He also was active in the development of the Bishop Tutu Refugee relief agency during the critical years fighting the apartheid system in South Africa. Mark was honored with a Doctorate of Humane Letters by Wesleyan University in 2009 for his work in the Health Care field.

Margaret Flinter is Senior Vice President and Clinical Director of the Community Health Center, Inc. and is a family nurse practitioner by profession. Margaret earned her Bachelor’s Degree in Nursing from the University of Connecticut, her Master’s Degree from Yale University, and her doctoral degree at the University of Connecticut. She was the recipient of a Robert Wood Johnson Executive Nurse Fellowship from 2002-2005.

Following her graduate training at Yale University, Margaret joined the Community Health Center in 1980 as a National Health Service Corps Scholar and CHC’s first nurse practitioner. Since 1987 she has held both clinical and administrative leadership roles in the organization. She recently established the Weitzman Center for Innovation in Community Health and Primary Care as the “research and development” arm of CHC and serves as the Director of the Weitzman Center. Margaret is also the founder of America’s first Nurse practitioner residency program which operates out of the Community Health Center.