Navy officials told Congress  Thursday that they were  “shocked” at a string of four separate at-sea accidents in the Asia-Pacific region since the start of 2017, calling the collisions and groundings unacceptable and promising to improve safety.

The two most recent accidents — those involving the U.S.S. John McCain and U.S.S. Fitzgerald — happened within two months of one another, claiming the lives of 17 sailors and prompting a Navy-wide review of any factors that might have...

Navy officials told Congress  Thursday that they were  “shocked” at a string of four separate at-sea accidents in the Asia-Pacific region since the start of 2017, calling the collisions and groundings unacceptable and promising to improve safety.

The two most recent accidents — those involving the U.S.S. John McCain and U.S.S. Fitzgerald — happened within two months of one another, claiming the lives of 17 sailors and prompting a Navy-wide review of any factors that might have contributed to two separate collisions with commercial vessels, both during the dead of night during otherwise normal operations.

Adm. Bill Moran, vice chief of naval operations, told the House Armed Services Committee that although the review is far from finished, it’s clear, in retrospect, that the service had been overly optimistic about the ability of the Japan-based 7th Fleet to continue operating safely and proficiently in an extremely high-tempo operating environment — one that often denied crews sufficient time to complete key training activities.

“I personally have made the assumption for many, many years that our forward-deployed force in Japan was the most proficient, well-trained, most experienced force we have, because they’re operating all the time. It was the wrong assumption,” Moran said. “We have to get to the root cause of both mishaps before we can make a determination. But the trends that have been pointed out by the Government Accountability Office in our reporting stats are concerning. They point to a fraying in our readiness that we need to address.”

The statistics Moran referenced were brought into stark relief by updated figures GAO presented on Sept. 7.

Within the 7th Fleet, 37 percent of the warfare certifications required for cruisers, destroyers and their crews were expired as of June, the same month in which the Fitzgerald collided with a container vessel. Of those, more than two-thirds had been expired for five months or more.

The figures represented a dramatic increase from just two years before, when only 7 percent of the certifications were expired.

John Pendleton, director for force structure and readiness issues at GAO, said part of the problem is that Navy vessels that are permanently forward-deployed at overseas bases have fewer opportunities for crew training and regular maintenance, an issue GAO has been warning about since at least the summer of 2015.

“We were told at that point that the overseas ships were so busy that they had to train ‘on the margins,’ a term I had not heard before,” Pendleton said. “It was explained to me that they had to squeeze training in when they could. Given our concerns, we recommended to the Navy that it carefully analyze the risks that were mounting, especially given the plans to increase overseas basing in the future.”

In its official response to GAO’s 2015 warning, the Defense Department said that the Navy was well aware of the risks associated with homeporting ships overseas, but that the decision to accept those risks was “based on the operational decision to provide increased presence” requested by DoD’s combatant commanders.

“I fear this was a bad gamble, in retrospect,” Pendleton said.

Navy officials say that in each case in which a commanding officer was allowed to operate a ship with a lapsed certification in any of the 22 areas in which the vessels are supposed to be qualified, he or she is required to apply for a waiver that must eventually be approved by the commander of the 7th Fleet.

Each time that happens, the commander also has to draw up a plan to mitigate the risks of operating without a proper certification.

“But the trend of the number [of commanders] who were asking for waivers is increasing at an alarming rate, one that ought to give us all pause about just how hard we’re driving the crews in 7th Fleet,” Moran said. “It’s changing schedules, delayed maintenance, additional missions that they’ve been asked to perform. It’s making it more difficult to get the ship ready and get the afloat training group onboard that ship to do the certification at the right time before it expires. So it’s not always an indication that they’re not qualified to do their missions.”

Another factor behind the missing certifications, officials say, is that the Japan-based afloat training group (ATG) in charge of inspecting and certifying crews and vessels is, itself, undermanned.

“These are the best of our sailors, and we look throughout the fleet to find them,” said Rear Adm. Ronald Boxall, Navy director of surface warfare. “It may be a boatswains mate for deck evolutions or a quartermaster for navigation or an electrician for engineering. We have put a lot of money into buying the manpower to get the people we need in those ATGs. We’ve increased the billets from 120 to 180, but they’re missing 30-40 folks on the team. That’s because it takes many years to generate that senior enlisted sailor, and the priority goes to putting those folks on ships first, not ATGs.”

Navy officials and GAO both stressed that the precise causes of the USS Fitzgerald and McCain collisisions won’t be known until the Navy completes a comprehensive review of the crashes.

But one topic being considered surrounds the working conditions endured by sailors assigned to the 7th Fleet’s forward-deployed ships. One internal Navy study estimated the average sailor was on duty 108 hours per week – well in excess of the Navy’s standard allocation: 81 hours.

“We have an organization in Millington, Tenn., that we use to examine what the right sea duty work levels ought to be,” Moran said. “We’ve done it for decades and we’ve been pretty consistent with it, but based on the trend lines it’s certainly time to look at whether the maintenance backlog and the work effort by sailors on the waterfront is reaching a point where that work week needs to be modified.”

Moran said the Navy also is using the review to help it set realistic expectations for what missions it does and does not have the capacity to perform at any given moment, considering the fleet’s size, its crewmembers’ training and the maintenance condition of its vessels.

“We aren’t big enough to do everything we’re being tasked to do, and our culture is, ‘We’re going to get it done,’” he said. “That’s what the Navy is all about, and sometimes that culture works against us. We ask the sailors to do an awful lot, and perhaps we’ve asked them to do too much.”

Navy officials have previously said that there is no evidence that a foreign cyber attack played any role in either collision, but they said Thursday that investigators are continuing to pursue that angle. Experts from the Navy’s Fleet Cyber Command are currently picking apart the electronics and IT systems aboard the U.S.S. McCain in Singapore, where it is temporarily moored following its collision with a commercial vessel last month.

“We’ll use their knowledge of how they would attack to help determine whether we were attacked. They’ll know where to go look,” Moran said. “This is the first time we’ve done this, and it’s to try to institutionalize cyber as part of any mishap: aviation, submarines, you name it. We need to look at it as a regular order of business in any investigation.”

The review is also taking a top-to-bottom look at the basic training and education curriculum the Navy’s surface warfare officers undergo from the beginning of their careers.

Boxall acknowledged that the Navy made mistakes in that regard in the early 2000s, when it replaced some of the surface warfare community’s hands-on training with computer-based curriculum in order to cut costs, though that decision was reversed a few years later.

Still, he said the latest episodes point to the need to return to the fundamentals of ship navigation.

“When I heard of these two incidents, I was frankly shocked,” Boxall said. “I’m not sure what we’re going to find, but we have to get back to basics. We have warships with the best sensors and capabilities in the world, but a lot of those aren’t used for navigation. I believe there are fundamental skills that mariners need to have, whether you’re in a fishing boat, a merchant vessel or a Navy warship. We need to make that our core competency, and I know we have a lot more to do. We need to see what our teams find out, and then I’m ready to roll up sleeves and do whatever it takes.” 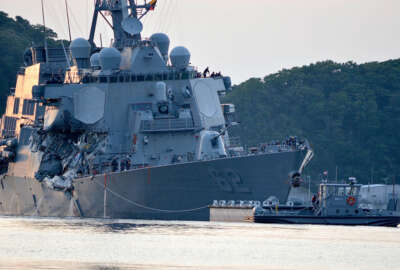