Each and every sailor aboard the USS Theodore Roosevelt is now being tested for the coronavirus after the aircraft carrier reported several additional cases aboard the vessel this week, Navy officials said Thursday.

The ship was headed to a pier in Guam, where the service said the crew would be isolated onboard as the massive task of testing its thousands of personnel unfolded. But officials said it was still not entirely clear how the virus...

Each and every sailor aboard the USS Theodore Roosevelt is now being tested for the coronavirus after the aircraft carrier reported several additional cases aboard the vessel this week, Navy officials said Thursday.

The ship was headed to a pier in Guam, where the service said the crew would be isolated onboard as the massive task of testing its thousands of personnel unfolded. But officials said it was still not entirely clear how the virus made its way onboard in the first place.

The Roosevelt was last in port about two weeks ago, when it visited Vietnam and sailors were allowed liberty. The Navy said the risks appeared to be acceptable at the time, because there were only 16 documented cases in that country. And they’re still not willing to draw a direct line between that port visit and the Roosevelt’s cases, since planes and helicopters have been moving to and from the ship since then.

In any event, the Navy announced its first three cases aboard the Roosevelt on Tuesday and medevaced all three sailors. Thomas Modly, the acting secretary of the Navy announced Thursday that at least five more were diagnosed and evacuated throughout the course of the week, but he said the ship remains fully operationally capable if it needs to deploy.

“The sailors who have been flown off the ship are currently doing fine,” he said. “None of them have been required to be hospitalized, because their symptoms are very mild — they’re aches and pains and those types of things. So they are in quarantine now on Guam.”

Modly said the ship already has 800 test kits on board, and more were being flown to the carrier on Thursday. The vessel does have its own testing facilities onboard, but some of the samples will likely need to be sent to shore-based labs in order to process all 5,000 sailors.

As of Thursday, the Navy had a total of 133 confirmed COVID-19 cases, including 104 active duty members, 23 civilians, 16 dependents, and 19 contractors. Overall, the Defense Department reported 574 cases — 159 more than the day before, and more than seven times the number of diagnoses it had recorded at the same time last week.

To reduce the spread, the Pentagon announced an unprecedented stop to overseas deployments and training on Wednesday, and implemented new health protection measures at all of its worldwide bases.

“We’re continuing to train mission-essential personnel, but really what we’re trying to do is to balance protecting the force so we can protect the nation,” Gen. James McConville, the Chief of Staff of the Army told reporters Thursday. “Each commander is taking a look at the critical missions that they have to determine just how much training they need. But we’re putting in effect what I would call a safety-bubble type mentality. When we maneuver a squad in a tactical situation, we usually have five meters in between members, just in case, because of the [enemy] threat. In this case, it’s an invisible threat, but we still need to keep that distance.”

In Korea, the Army has been able to limit its own coronavirus infections to only a handful of cases by restricting people’s movements, implementing social distancing, and strictly controlling access to installations — including temperature checks for anyone entering.

McConville said officials are taking as many lessons as they can from that experience, but many of the practices are more difficult to implement at stateside bases, since roughly 70% of military members and employees who work there live outside the fence line.

“Dependents have to limit exposure too, and that’s the challenge,” he said. “You can do perfect with the soldiers, but the soldiers are living off post and they have dependents who are exposing themselves. It’s much more challenging in the United States, because there’s things that still have to be done. We have soldiers that have a mission, they continue to train, they still have to do combat operations. So what you’re really doing is mitigating risk.”

In the meantime, military officials are mobilizing their own medical capabilities to help augment the U.S. health care system as coronavirus patients add strain to civilian hospitals.

Army field hospital units from Fort Campbell, Kentucky and Fort Hood, Texas, will start setting up operations at the Javits convention center in New York over the weekend. A similar unit from Fort Carson, Colorado is evaluating potential sites in the Seattle area. In both cases, they’ll mainly be caring for patients who aren’t infected with coronavirus.

“The whole-of-government approach is that they’re going to put a couple thousand beds in there,” said Lt. Gen. Charles Flynn, the Army’s deputy chief of staff for operations and plans. “But what they’re really doing is taking pressure off the local and state healthcare system and moving patients into that facility. They’re still going to have people with broken legs and car accidents and everything else that will need to be cared for.”

The Navy is taking similar steps with its two hospital ships. Again, they won’t be caring for COVID patients, but the USNS Mercy and the USNS Comfort will deploy from San Diego and Norfolk to Los Angeles and New York, respectively, mainly to handle more-routine trauma cases.

“We’ve accelerated the plan for Comfort,” Modly said. “We had originally been looking at April 3, but in all likelihood she’s going to be getting underway this weekend. Hopefully she’ll be in New York by the early part of next week. It will all depend on her transit time and how well she’s functioning on the on the route up there, but I would say within a couple days of that.” 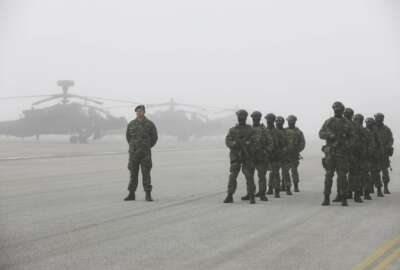 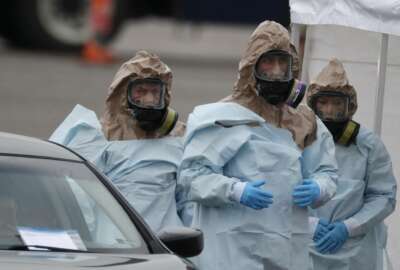