In the early days of the coronavirus pandemic, the Defense Department struggled to accommodate a massive surge in teleworkers, mainly because of bandwidth constraints. But DoD and the military services have made massive upgrades in the weeks since, and many of them are likely to linger long after the emergency ends.

Perhaps the biggest surge in teleworking capability comes via a service offering that didn’t exist at the beginning of the pandemic, called Commercial Virtual...

In the early days of the coronavirus pandemic, the Defense Department struggled to accommodate a massive surge in teleworkers, mainly because of bandwidth constraints. But DoD and the military services have made massive upgrades in the weeks since, and many of them are likely to linger long after the emergency ends.

Perhaps the biggest surge in teleworking capability comes via a service offering that didn’t exist at the beginning of the pandemic, called Commercial Virtual Remote (CVR). It is a DoD-only implementation of Microsoft Teams that gives employees access to chat, videoconferencing, document and file sharing and other collaboration tools from their homes.

As of Monday, the military services and other Defense components had set up 900,000 user accounts in CVR — 250,000 of which joined in just a single day last week.

“This is the largest rollout ever implemented in this short amount of time,” said Dana Deasy, the department’s chief information officer. “We are moving at incredible pace, showing a significant amount of innovation.”

CVR is meant to be a temporary solution to help the department deal with the unprecedented volume of teleworkers, in part by moving some of their day-to-day work off of Defense networks and onto commercial ones when they’re working from home.

The Pentagon plans to shut the service down once the emergency is over. Defense officials initially said they also planned to destroy all of the data users are now creating and storing in CVR at the end of the pandemic, but Deasy told reporters Monday that’s not necessarily the case. The somewhat-novel way of delivering IT services to remote users has implications for other DoD IT policies and laws, like the Federal Records Act, that still need to be worked through.

“Even though we have stood this up in an extraordinary amount of time, we’ve also had a lot of very healthy discussions regarding cybersecurity implications, existing policies, and what does this mean with the data that we’ve created,” he said. “We recognize that a lot of data is being created and it’s going onto an unclassified environment. I wouldn’t say that we’ve concluded right now that we will destroy the data. We’re looking at options on how we take this data and preserve it or port it into other collaboration environments going forward. That decision has not been taken.”

Regardless of what happens with CVR, the department has made huge investments in other telework capabilities that are expected to outlast the current pandemic. They’ve mainly been planned and implemented via a Pentagon telework task force that meets for about two hours each day.

To help address network bottlenecks, the Defense Information Systems Agency has boosted internet connectivity at the Pentagon by 30%. The Air Force has raised the number of users who can access its virtual private network from 10,000 to more than 100,000, and already has plans to raise that to 400,000.

Similarly, the Navy plans to boost its capacity for remote users from 100,000 to 500,000 within the next few weeks, and the Army has increased its network capacity for data and voice traffic by 400%.

“We’ve obviously always had a teleworking capability, but we’ve just put a multiplier effect into the quantity, the types of services, the collaboration tools,” Deasy said. “And there will be some permanency to what we have here. We also have created a base of teleworking equipment that we’ll be able to, in some cases, reuse for other purposes.”

Deasy says in the Pentagon alone, 2,000 more laptops have already been purchased to let employees work remotely. In other areas — like U.S. Central Command — the department has also made inroads with pilot programs that also let more users access classified data from offsite.

But clearly not every user needs the same level of access.

Lt. Gen. B.J. Shwedo, the Joint Staff’s chief information officer, said the investments that are most likely to outlive the coronavirus pandemic are the ones the department has quickly made to its network infrastructure.

“What you’ll find is, to enable all of these capabilities, we had to do a lot of back-end work, and we’re not just procuring laptops and other devices, we also have to manipulate the individual combatant commands’ back end,” he said. “That doesn’t go away. This is going to be a force multiplier for the future case of another pandemic, but it also gives us additional capabilities with any other worldwide crisis.” 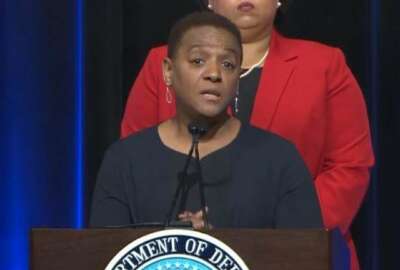