The Defense Department is preparing to distribute about 44,000 COVID-19 vaccines and give them mostly to frontline military healthcare workers as soon as the shots get final emergency approval — most likely this week.

The vaccines will go out as part of a pilot program conducted by the Pentagon to test its distribution. The nearly 44,000 shots will only be the initial injections of the two-shot Pfizer vaccine, which has been shown to be 95%...

The Defense Department is preparing to distribute about 44,000 COVID-19 vaccines and give them mostly to frontline military healthcare workers as soon as the shots get final emergency approval — most likely this week.

The vaccines will go out as part of a pilot program conducted by the Pentagon to test its distribution. The nearly 44,000 shots will only be the initial injections of the two-shot Pfizer vaccine, which has been shown to be 95% effective in preventing coronavirus.

The vaccines will be distributed to 16 sites worldwide. Only people living or working at those sites will receive the vaccine during the pilot phase.

“As soon as the Food and Drug Administration issues an emergency use authorization (EUA), DoD vaccine allocations will be preposition at our initial locations,” Thomas McCaffery, DoD assistant secretary for health affairs, said Wednesday at the Pentagon. “Upon issuance of the EUA the Centers for Disease Control Advisory Committee on Immunization Practices will meet, review the EUA, and then vote to recommend the vaccine, how it should be disseminated and who should receive it. We expect to have shots in arms of DoD personnel within 24 to 48 hours from the time the advisory committee issues its final recommendation.”

EUA could come as soon as tomorrow.

“The very, very top priority and initial phase is going to be healthcare workers,” said Defense Health Agency Director Lt. Gen. Ronald Place. “Inpatient workers most close to the patients will be the first, then the early emergency responders, public security, and then down in terms of outpatient so forth.”

A small portion of critical national security workers may also get a vaccine. Those include cyber operators and troops in charge of nuclear weapons.

Only about 8% or 9% of DoD’s healthcare population will be able to get the first shot of the vaccination during the pilot.

Since the vaccine is emergency use, all shots will be completely voluntary.

“We’re recommending that everyone take the vaccine when it becomes available, protect yourselves, your families, your shipmates, your wingmen, your battle buddies and your communities,” he said. “Some people may experience small, adverse effects like arm soreness, fatigue, even a fever. The department will be fully transparent about any adverse effects that are reported, and share this information with the CDC.”

Place said a few public officials may get the vaccine as a means of convincing people to get the shot.

Of the 16 locations receiving the vaccine in the pilot, 13 are in the United States. The other three are in Landstuhl, Germany; Camp Humphreys, Korea; and Kadena Air Force Base in Japan.

The locations were chosen for their population, ability of medical staff to administer the vaccine, and cold storage — since the vaccines need to be kept at extremely cool temperatures. DoD is also requiring that an immunization expert be on site.

The U.S. bases getting the vaccine will be:

The smallest area will get nearly 1,000 vaccines, while larger areas will get about 6,000.

DoD will be evaluating how the pilot works as it is happening and monitoring those who take the vaccine. During that time it will also continue distributing the vaccine. Once the pilot is finished, DoD will start vaccinating other high priority populations.

After healthcare employees and critical national capability workers (which include some military leaders), then personnel preparing to deploy will get the shot. After that, other critical and essential support personnel will be vaccinated.

From there, DoD will enter phase 2, which will vaccinate high-risk beneficiaries and then finally enter phase 3 by vaccinating the healthy population.

The military, like the rest of the country, is currently experiencing a surge in cases.

(Courtesy of University of Maryland School of Medicine via AP) 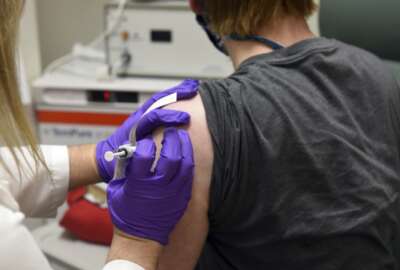 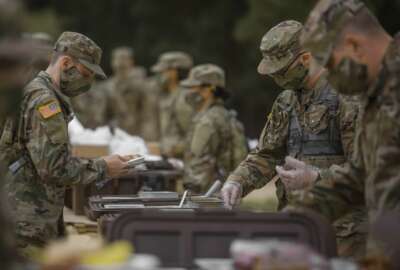 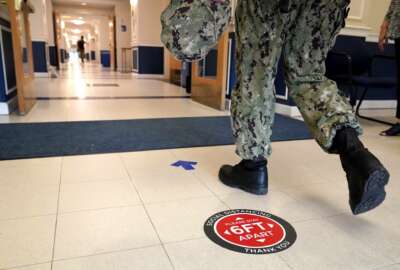 At military academies, COVID-19 is the enemy to be defeated