Defense Department planners know they can’t succeed with a technological edge over enemies, unless the U.S. industrial base can design and build things the military needs. That’s the idea behind an initiative called the National Imperative for Industrial Skills, backed by $27 million in seed money. With more, the director of the industrial base analysis and...

Defense Department planners know they can’t succeed with a technological edge over enemies, unless the U.S. industrial base can design and build things the military needs. That’s the idea behind an initiative called the National Imperative for Industrial Skills, backed by $27 million in seed money. With more, the director of the industrial base analysis and sustainment program, Adele Ratcliff, joined Federal Drive with Tom Temin.

Tom Temin: Mr. Ratcliff, good to have you on.

Tom Temin: Tell us more about this program and what you’re trying to accomplish.

Adele Ratcliff: Excited to be here today to talk about this. Our industrial skills workers have been the bedrock of our economic and national security since the history of our country. But we’ve seen an erosion of that pipeline of industrial skills, development, and the prestige of that recruiting, training and putting people into that pipeline. Our think tanks estimate more than 2 million open manufacturing jobs in this country. Those jobs create economic growth and when needed support national security. And these are promising and fulfilling jobs that people can enter into. As we canvassed our industrial base and talk to industry and talk to schools, we saw this chronic and acute shortage of labor really starting to impinge upon our ability to produce product. So we wanted to act and act swiftly to coalesce people to work together and begin to think differently about how we could put those workers in place with the skills that we needed when we needed them.

Tom Temin: You are talking also about not just manufacturing skills, but also engineering skills, because that comes first before you make a thing.

Adele Ratcliff: That’s true. We talk a lot about the engineering needs in this country and the need to grow more organic capabilities in our country of engineering students. But our focus has been mostly on the industrial skills, because we do talk a lot in the Department of Defense about that engineering shortage. But we haven’t talked a lot about the impact of the industrial skills worker and their value. And that’s what we wanted to draw the attention to, by that title, the national imperative for industrial skills, there are thousands of jobs needed for our defense programs around these skill sets. And yet, we don’t have the capacity within our community college and training programs to position those people at the time where we need them and we wanted to draw attention to that.

Tom Temin: And so the $27 million that you have has gone to several prototype types of programs. Tell us more about those.

Adele Ratcliff: Yeah, as we look to claw back American supply chains or expand current ones, there are skill sets that are foundational to any industry — welding metrology machining that we need at scale and velocity. And so we’re excited to be able to pilot some of those type activities with say, Danville, Virginia, we’re looking to take those two year programs and crest them into under six months move from tens of people to hundreds of people a year to help put into the ship and sub sector. Another ward is up in the New England area to help grow the skill sets needed for the Columbia class in that region. We’re also looking at you talk about fundamental needs that we need for all of our industries like micro electronics, we need to grow the technician skill sets there as well. And so we’ve awarded to a program that will target local needs for micro-electronics and design that curriculum. When we’re talking about the small and medium manufacturers in our sub tier supply chains, if we want them to be able to capture the use of IoT 4.0 or capture the benefits of the current capabilities of machine tools, they need skilled workers to do that. So we’re partnering with Auburn University to establish a program for Alabama to help grow the IoT 4.0 front for technicians, and new systems engineering technicians and capture the benefit of advanced machining. And one of the ones that I’m most proud about is a lot of action competition that we started last year project MFG that has had resounding success in the communities. We’ve had more than 143 participants. We’ve scholarship more than $650,000 through those competitions. And this year’s award will continue that evolution and we’ll target those defense communities and design those competitions against those specialty skill sets needed for that community. And this helps create energy and inform the communities of their shortfalls.

Tom Temin: So the prototype programs then are educational in nature, in the pursuit of skills development, is that a good way to put it?

Tom Temin: And my question then is do you believe that there are actually jobs available for the people so trained? That is to say the issue is not so much a shortage of companies to do this work, but a shortage of people to fill the jobs those companies that exist actually have.

Adele Ratcliff: We’re talking about millions of shortfalls of jobs in this country, they’re left unfilled, they’re waiting for someone to fill those opportunities and contribute to the economic and national security growth of our country.

Tom Temin: And these types of jobs, say you’re working on a Columbia class sub in your, I guess, there’s some welding. I don’t know how you work with titanium and some of the materials, high end materials, but these are good paying jobs, aren’t they too?

Adele Ratcliff: Outstanding paying jobs. We’re talking about five figures for machinist and welders up to six figures in some communities for those same skill sets from less than a two year degree.

Tom Temin: Sure. And is there also the possibility that people trained under these programs say coming out of Auburn or one of the institutions in New England could become entrepreneurs with those skills and start the types of supply chain participants that DoD might need. Absolutely. Which we need those as well. A skilled technician that has an entrepreneurial mindset, I think would be hugely beneficial to our country. And of course, you can’t guarantee that they’ll get work or stay with the defense contractors directly. But it seems like there’s a possibly bigger theme here and that is bringing back manufacturing in general from China.

Adele Ratcliff: That’s right, our supply chain ebbs and flows out of the Department of Defense. And if we want to attack the issues related to the defense supply chain, to some degree, we need to begin to address that holistically within the workforce development pipelines. So these efforts not only benefit the DoD, they benefit their communities, and they benefit the individual as well.

Tom Temin: And I want to ask a question about your title, you are director of industrial base analysis and sustainment, what activities do you do to analyze the supply base?

Adele Ratcliff: Well, with respect to workforce, this is kind of a new effort for us that we started a couple years ago really looking at in earnest within our program. And unlike, say, carbon fiber, where we have a better handle on the aggregated needs of the Department of Defense for that we haven’t really taken that approach at an aggregated need level of the workforce skills needed at the shop floor. And so now we’re working with our programs of record to understand, let’s chase that supply chain of workforce, so to speak, do that across other programs. Aggregate the need against those skills, and then use that to inform the engagement strategies and investment strategies at the states. In fact, one of our awards with Texas A&M is to do just that.

Tom Temin: Yeah. And then the other issue too, is that we’ve been talking say, again, to go back to the example of the Columbia class submarine, there’s a prime contractor for that. But whether you’re building an airplane, or a submarine or a ship, there are hundreds, sometimes thousands of subcontractors, people that have to manufacture gyroscopes and computer racks, the thousands and thousand of parts on these things. So is that also the goal of the program to migrate people out to the subcontractor level, some of which is extremely high technology manufacturing?

Adele Ratcliff: Right, our focus is not just on the OEMs, it is that that aggregated need within that program, historically, we think, hey the OEMs are can solve that workforce challenge. But we know that’s not true, right. They have to cross organizational lines, our supply chains, cross state lines, and those are at the sub tier level. And we need to take that same mindset of that sub care workforce need, like we do on say, carbon fiber, and other more traditional materials.

Tom Temin: Now, some of the things DoD builds and uses have commonality with things in the private sector, we have Boeing that makes both commercial and military aircraft, for example, we don’t have much of a shipbuilding industry, but we have other industries that make vehicles and weapons and so on, handguns, whatever it might be for military and commercial purposes, or non military purposes. Is there any sense of cooperation with some of those OEMs that also have would have similar supply chain issues, if they wanted to have us sourced sub components?

Adele Ratcliff: We’re working with our industry associations to understand their sector requirements, so to speak, for aerospace. So we can take that into account in terms of those skill sets. We don’t want to be competing against that labor market. We want to work together to grow the labor requirements, especially at the state level against that entire sector needs so that we’re not competing against ourselves for that labor.

Tom Temin: Alright. So you’ve got these prototyping, these are grants or contracts that are out ?

Adele Ratcliff: There prototype awards underneath the other transaction authority called Cornerstone that we launched to help invest. We use it to help grow investments down in the industrial base.

Tom Temin: Alright, so those awards are out and what happens next? How do you monitor them? How do you know it’s having some effect?

Adele Ratcliff: Well, we’ve had our kickoff meetings with all of them. And now we’re starting to develop the curricular institute, the programs, order equipment if needed. So we’ll be monitoring that working with each of those performers, and also networking them together so that we share best practices and circulate that information.

Tom Temin: Adele Ratcliff is director of the Industrial Base Analysis and Sustainment Program in the office of industrial policy at the Defense Department. Thanks so much for joining me.

Adele Ratcliff: Thanks for having me. 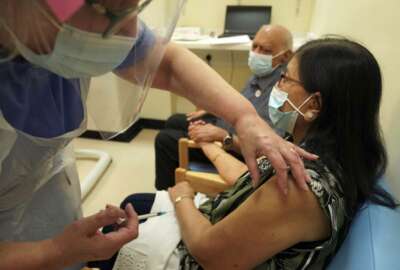