DoD Chief Data Officer David Spirk, speaking Wednesday at a virtual roundtable hosted by George Washington University’s Project for Media and National Security, said DoD is putting real-time data in the hands of senior leadership at the Pentagon to make critical decisions more quickly and stay on top of...

Some of DoD’s senior-most decision-making forums, led by Deputy Secretary of Defense Kathleen Hicks, including the Defense Workforce Council, now pull up live data instead of PowerPoint slides during meetings to inform personnel and readiness decisions.

“If you don’t organize your data, if you can’t create repeatable, testable and trusted data workflows from the tactical edge all the way up to your senior-most decision-making boardroom activities, then you will just lag behind,” Spirk said. “We’ve seen this in industry, it’s really no different in the strategic competition with other nation-states who have an ability to harness their data, and can access the compute required to actually do something with it.”

The Pentagon, meanwhile, is looking to better align its work around data management and AI through a reshuffling of its senior leaders.

Hicks, in a memo last month, ordered the creation of a new Chief Digital and Artificial Intelligence Officer (CDAO) position to oversee the DoD CDO, the Joint AI Center and the Defense Digital Service.

Spirk said the upcoming reorganization, based on a recent phone call with Hicks, will help ensure DoD “is doubling down again on a data-driven future for the department, and ensuring this isn’t a passing fad.”

“What it’s going to allow is that stronger alignment to really accelerate into the future in a more formal manner. I don’t view it as a bureaucracy. If anything, I think the establishment of this activity knocks down some bureaucratic walls, because it puts all of us under one vision that a CDAO can come in and lead,” Spirk said.

DoD, meanwhile, is making progress on its month-long effort to review the data and AI capabilities of all 11 of its combatant commands as part of its AI and Data Acceleration initiative.

Spirk said deputy DoD CDO Clark Cully and JAIC officials have traveled to eight of 11 commands so far. A ninth visit will happen this Thursday when the team meets with Cyber Command.

“Cyber is one of the most important because it’s one of the areas that obviously leverages data organically,” Spirk said.

Spirk also holds monthly meetings with the CDOs at those combatant commands as part of a Joint Warfighting Forum.

DoD’s ADA initiative looks to move the department’s AI capabilities beyond the experimental phase and develop practical uses for data and AI in combatant commands around the world.

DoD, as part of the ADA initiative, is looking to catalog the data feeds commanders currently use to make decisions, and determine how AI algorithms could potentially help improve their decision-making capability.

The Pentagon, meanwhile, is relying on several major data analytics platforms to enable real-time decisions from its top brass.

DoD and Booz Allen Hamilton launched the Advana platform in 2019 to simplify more than 3,000 business systems and provide data analytics capabilities on everything from finance and contracting, to logistics and readiness.

Spirk said the Advana platform originated out of DoD’s comptroller office, and has improved the department’s capability to conduct audits. The platform, he said, has more than 45,000 active users.

The Advana platform, however, goes beyond financial number-crunching. Spirk said DoD, in recent exercises, have used readiness data on the Advana platform to develop decision options in minutes that would have previously taken hours or even days.

Spirk said he sees Advana not just as business analytics, but as the hub for DoD to create its first federated data catalog.

“We don’t have to have all the data resident, we just need to understand what data we have, where it is, and some key features associated with it,” he said.

Spirk said DoD, through Project Maven, is building out the department’s AI capabilities for and operations planning activities. Google, however, dropped out of the project in 2018 after it pledged to develop AI applications related to weapons or surveillance.

That fallout, however, hasn’t diminished the project’s role within DoD.

To ensure the U.S. stays ahead of the global arms race around, however, Spirk said DoD will need to continue to rely on private industry for support.

“I don’t necessarily see China having an advantage over us, but I do understand that if we don’t continue to partner with our commercial sector, our lead cloud vendors, and see them as national security treasures … if we don’t continue to grow those partnerships and leverage those capabilities, then I think we’ll find ourselves falling off pace,” Spirk said.

DoD and the Veterans Affairs Department, meanwhile, are putting the finishing touches on a joint data and analytics strategy that will better serve military personnel as they transition out of the active-duty service.

While the strategy is still pending, Spirk said both DoD and VA are laying the groundwork for interoperable data management and analytics platforms, as well as a seamless sharing of data between both agencies.

“As we all move to the same electronic health record system, and we start to think about that soldier-veteran journey, that service member or veteran journey, what that looks like, how it really applies from the time we have somebody recruited into the military until the exit — whether that exit is after one enlistment and one tour or whether that exit is after a lifelong journey in retirement — I think we owe it to our service members to get this right,” Spirk said. 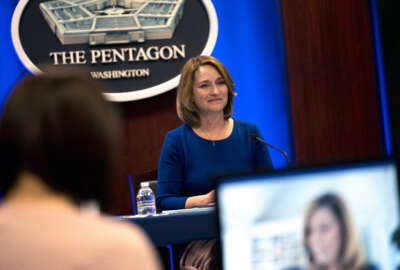 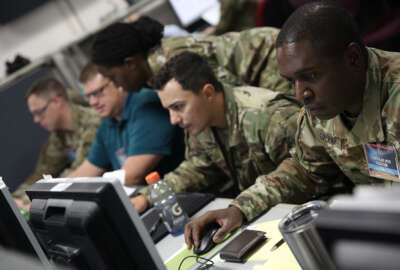