The Pentagon used a faulty legal justification for its decision to award its up-to-$10 billion JEDI Cloud contract to a single vendor, according to a federal court ruling unsealed on Friday.

The finding — part of a 60-page opinion by Court of Federal Claims judge Eric Bruggink — was one of the few areas in which the court sided with the plaintiff, Oracle America. But the Pentagon’s misstep made no difference in the case’s ultimate...

The Pentagon used a faulty legal justification for its decision to award its up-to-$10 billion JEDI Cloud contract to a single vendor, according to a federal court ruling unsealed on Friday.

The finding — part of a 60-page opinion by Court of Federal Claims judge Eric Bruggink — was one of the few areas in which the court sided with the plaintiff, Oracle America. But the Pentagon’s misstep made no difference in the case’s ultimate outcome, and DoD will be allowed to proceed with the contract unless it’s delayed by an appeal. That’s because the court also ruled that Oracle couldn’t have been harmed by the single-award decision, since the company was disqualified from the JEDI procurement on other grounds.

Bruggink found DoD ran afoul of a 2008 law that requires indefinite-delivery/indefinite quantity contracts worth more than $112 million to go to multiple bidders. The law does allow for exceptions, but the judge ruled that the one DoD chose as its justification for a single award was improper.

Specifically, in a notice published last summer, Undersecretary of Defense for Acquisition and Sustainment Ellen Lord asserted that a single award was allowed under the law because all of JEDI’s future orders would be for firm, fixed prices that were set at the time of the initial contract.

But Oracle argued — and the judge agreed — that that could not possibly be true. That’s because the JEDI procurement also demands that the winning vendor continue to add its commercial cloud services to its JEDI offerings in the coming years as new services and technologies come online.

“There is a logical disconnect between claiming that prices are ‘established in the contract’ for ‘specific tasks’ while simultaneously acknowledging that those tasks, and their accompanying prices, do not yet exist,” Bruggink wrote. “Prices for new, additional services to be identified and priced in the future, even if they may be capped in some cases, are not, by definition, fixed or established at the time of contracting.”

The opinion unsealed Friday is a full description of the reasoning the judge used when he ruled in DoD’s favor in a brief judgment earlier this month. In the earlier ruling, he said he was rejecting Oracle’s JEDI challenge because the company could not satisfy one of the gate criteria the Pentagon established in the contract as a cybersecurity qualification.

Consequently, even though DoD does appear to have violated the law requiring multiple awards, Oracle wasn’t prejudiced by that decision, and can’t win the case on that basis, Bruggink wrote in the full opinion.

“In other words, although this criteria presumes a single award, the only logical conclusion is that, if multiple awards were made, the security concerns would ratchet up, not down. They are, indeed, minimally stated. If Oracle cannot meet Gate Criteria 1.2 as currently configured, it is thus not prejudiced by the decision to make a single award. The agency’s needs would not change, so Oracle would not stand a better chance of being awarded this contract if the agency determined that the procurement must be changed to multiple award.”

Complicating the legality of the single-award decision even further, the judge sided with DoD on one of its other legal claims that it said supported a single award.

A seemingly-contradictory section of the Federal Acquisition Regulation actually requires the government to use single-award contracts under some scenarios. To defend its winner-take-all approach, DoD had leaned heavily on that section of the FAR, which requires single awards if they would end up yielding “more favorable terms and conditions,” better pricing, or simpler contract administration.

The judge acknowledged his two findings about single awards — with one favoring DoD and one finding it violated the law — were “in tension” with one another.

“This peculiar state of affairs is an artifact of a code section which is a mixture, rather than an alloy, of various pieces of legislation,” he wrote. “Not surprisingly, the parties have different views about the implications of this possible result and whether Oracle is prejudiced by the flawed D&F.”

In a statement Sunday evening, the Defense Department said it disagreed with the judge’s decision on the legality of its single-award approach, but celebrated the rest of the opinion for vindicating its overall acquisition strategy.

“Read in its entirety, the ruling highlights that DoD’s unique needs for the warfighter have consistently driven decisions related to JEDI,” Elissa Smith, a Pentagon spokeswoman said in a statement. “Empowering the warfighter is the first principle of all DoD acquisition and has been the guiding light for the dedicated team of public servants working under terrific scrutiny to bring the tools of the digital age to our nation’s men and women in uniform.”

The court also sided with the Pentagon with regard to Oracle’s claims that former DoD employees with previous and current ties to Amazon Web Services tainted the procurement.

The judge reached essentially the same conclusion the department’s JEDI contracting officer did: although at least two of the employees committed potential or actual ethics violations, none of them meaningfully impacted the procurement.

“The CO’s work was thorough and even-handed,” Bruggink wrote. “She understood the legal and factual questions and considered the relevant evidence. It is unfortunate that the employees in question gave her so much evidence to consider, making it is easy for Oracle to cherry pick from the vast amount of communications and isolate a few suggestive sound bites. But that volume should not compel an unreasoned leap to the conclusion that there was fire as well as smoke.”

One of Oracle’s key claims had been that Deap Ubhi, a former Defense Digital Service employee who worked for AWS both before and after his time at DoD, strongly influenced the single-award decision and helped steer the contract’s terms in a way that favored the company.

The court – and the DoD contracting officer – found Ubhi committed ethics violations, including by taking part in the JEDI planning effort while he was in active discussions with AWS about rejoining the company, and that he eventually “falsely represented” his reasons for leaving DoD. Similarly, another longtime Defense employee, Victor Gavin, participated in at least one JEDI planning meeting after having accepted a job offer from Amazon.

“The facts on which Oracle rests its conflicts of interest allegations are certainly sufficient to raise eyebrows,” Bruggink wrote. “The CO concluded that at least two DoD officials disregarded their ethical obligations by negotiating for AWS employment while working on this procurement. Through lax oversight, or in the case of Ubhi, deception, DoD was apparently unaware of this fact. AWS, for its part, was too prepared to take at face value assurances by Mr. Ubhi that he had complied with his ethical obligations. While there is nothing per se illegal about capitalizing on relevant experience in moving to the private sector, the larger impression left is of a constant gravitational pull on agency employees by technology behemoths.”

But impressions aside, the judge found there was not enough evidence to conclude that either Ubhi or Gavin’s actions had any significant impact on the department’s procurement decisions.

The “real decisionmakers,” he wrote, were dead-set on a single award approach both before and after Ubhi became involved.

“If there was a high speed train headed toward a single award decision, Mr. Ubhi was merely a passenger on that train, and certainly not the conductor. Moreover, he exited DoD prior to the substance of the evaluation factors being crafted,” Bruggink wrote “Although the CO correctly found the assurances in his affidavit to be untrustworthy, we ultimately agree with the substance of her conclusion that his self-promoting, fabulist and often profanity-laced descriptions of his own role were merely that.”

For its part, the Pentagon said the position it had taken throughout the lawsuit — that the allegedly-conflicted employees were merely “bit players” in JEDI — was affirmed by the judge’s opinion.

“Oracle’s allegations…have been the subject of poorly-informed and often manipulative speculation,” Smith said in the department’s statement. “DoD officials directly involved in the work of this procurement along with the senior leaders charged with making the critical decisions related to JEDI have always placed the interests of the warfighter first and have acted without bias, prejudice, or self-interest. The same cannot be said of all parties to the debate over JEDI.”

Prior to Bruggink’s July 12 judgement in favor of DoD and AWS, Oracle officials had indicated that they were sufficiently committed to the cause of overturning the procurement that they would file an appeal if the company were to lose.

But Oracle has not commented since the initial ruling, and a company representative did not reply to questions on Friday about how the full opinion could impact its next legal steps. The Pentagon plans to award to the contract to either AWS or Microsoft by the end of next month unless that award is stayed by an appeal.

In the meantime, the contract has taken on political overtones never before seen in government IT contracting.

President Trump said on July 18 that his administration would “take a very long look” at JEDI, and various pro-and-anti JEDI lawmakers have drafted letters to the White House asking the president and other government officials to intervene in the matter or let the court decision stand. 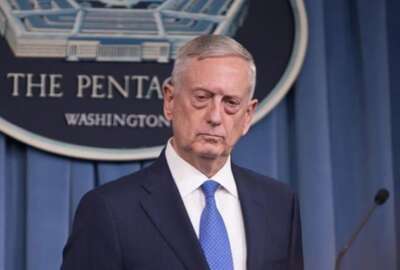