That, in itself, was a milestone: It was the first time the IG had ever done so in a sexual assault case.

But 10 years after James was first assaulted and four years after she reported the crime, the alleged perpetrator has never been charged and the Army...

That, in itself, was a milestone: It was the first time the IG had ever done so in a sexual assault case.

But 10 years after James was first assaulted and four years after she reported the crime, the alleged perpetrator has never been charged and the Army has yet to issue any punishments to the general officer who, according to the IG, derailed her career for her dogged pursuit of a criminal investigation. Nor has it done anything to remedy the years of reprisals the IG found she suffered starting in 2012.

James, now medically retired from the West Virginia National Guard, initially decided not to report that a superior officer had sexually assaulted her during a temporary duty assignment in Arkansas in 2006, fearing that doing so would ruin her career.

“I tucked it away,” she said. “I had a thriving career, I was a very resilient leader, and I thought, ‘I can deal with this myself.’ And that’s exactly what I did for six years.”

But upon returning from a 2010 deployment to Iraq’s Anbar Province, she learned that the same officer had been routinely sexually harassing other, more junior women at her West Virginia home station.

“One of my subordinates would not even walk to the restroom without an escort,” she told an audience of whistleblower hotline leaders from federal, state and local agencies at the DoD IG’s headquarters in Alexandria, Va. Thursday. “People were afraid of him, and the morale was very low. I was one of the highest ranking female officers there, and these women came to me. I had a duty and an obligation to report this guy for what he was doing.”

A subsequent administrative investigation unearthed more serious allegations, including other sexual assaults by the same officer, and after James learned that he had suffered no consequences other than to be placed on medical leave, she decided in the fall of 2012 that it was time to report what had happened in Arkansas six years earlier.

The National Guard Bureau eventually substantiated her sexual assault allegations in March 2013, but the case had outlasted Arkansas’ criminal statute of limitations, and the Army Criminal Investigation Command determined that it lacked jurisdiction over the case.

James said that’s when the retaliation began in earnest. On the same day West Virginia officials notified her of the outcome of the NGB investigation, she was ordered to go before a medical review board, and even though doctors at Walter Reed National Military Medical Center initially found her fit for duty, she alleges they were influenced to change the results after phone calls from commanders in the West Virginia National Guard.

Later, she received the first negative performance evaluation in her 35-year career, which may have kept her from a promotion to colonel. She was denied at least one award for which she’d already been recommended.

“April of 2013 is when I finally said enough is enough,” James said. “All I did was report wrongdoing and now I’m watching my career tumble before my very eyes. So I went online to the DoD Hotline and I submitted my complaint.”

The IG found that the assistant adjutant general of the West Virginia National Guard engaged in adverse personnel practices in retaliation for her decision to seek criminal prosecution against her perpetrator. It recommended the Secretary of the Army take “appropriate action” against that one-star general, expunge the negative officer evaluation report from James’ personnel file and order the Army Board for Correction of Military Records to hold a new promotion board to decide whether she should be retroactively promoted to Colonel.

So far, none of those things has happened.

“It’s still not over for me. It’s not enough that I have a case that’s been substantiated,” she said. “Throughout this process, I’ve hired two civilian attorneys and spent $10,000. I don’t have that money — I’m retired now, but this is important to me. The reason I’m speaking out is not about me, it’s about those junior people who are still coming up in the ranks where the rubber meets the road, who don’t have a voice and don’t understand the system as well as I do. I’ll be their voice. I really will, if I have to be. That’s what inspires me. That’s what keeps me going.”

James moved to central Florida a year ago, saying it eventually became too difficult to stay in her small and close-knit home state, where she said at least two co-workers had faced retaliation for helping her compile information during her pursuit of a criminal investigation.

“Several other people said, ‘Terry, I’d absolutely love to help you, but I fear for my job.’ And people should never, ever have to fear for their job for helping somebody else,'” she said. “It’s been a good move, trust me. I was afraid in West Virginia. I never knew when I was going to run into someone who had harassed me. I couldn’t live my life. I was isolated, I was avoided. I had to ask my children to go to the grocery store for me. That’s the kind of trauma and emotions a person is dealing with in a situation like this.”

James said she credits the DoD IG for a thorough and professional investigation of her case, something she says she didn’t experience when trying to report to lower-level military investigative organizations.

However, she said the Defense Department’s broader mechanisms for responding to sexual assault and handling whistleblower claims seem to be improving.

IG officials say James’ case being the first one the office has ever been able to substantiate has partially to do with the fact that until now, it’s received no more than five retaliation allegations in any recent year.

But the office has gotten more than 40 complaints so far in 2016 and is actively investigating 30 of those cases, said Nilgun Tolek, the IG’s director for whistleblower reprisal investigations.

“We obviously can’t say what the reason is for the number going up, but we hope it’s because word is getting out more that people can call us,” Tolek said. “One of the things the JPP said was that since it’s apparent that more people are coming forward and reporting sexual assaults, perhaps the number of people who’d suffered reprisals would also increase their complaint filing with us.”

That specialized team and outreach structure didn’t exist at the time James first began pursuing her case. She said she dealt with perhaps ten different investigative agencies before her first contact with the DoD hotline.

“Every case is different, but there should be some type of one-stop shopping for sexual assault survivors, and I think the system is going in that direction,” James said. “We’ve had a lot of changes in the sexual assault policies and assistance to survivors, but one of the biggest things for me was the amount of time it took to get to where I’m at today. Three years to get through an investigation is a very lengthy process, and perhaps standing this team up will help with that. But overall, I think we’re moving in the right direction.” 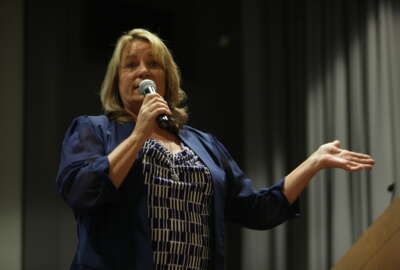