The Defense Department will not meet its goal of transitioning to Windows 10 by January 2017.

That comes straight from DoD’s Chief Information Officer Terry Halvorsen, who set the goal for the department late last year.

“I don’t think most people understand how hard it is to get to Windows 10 single operating system in a DoD of 4 million plus,” Halvorsen said during AFCEA’s Sep. 1 Joint Warfighter IT Day in Vienna, Virginia. “Plus...

The Defense Department will not meet its goal of transitioning to Windows 10 by January 2017.

That comes straight from DoD’s Chief Information Officer Terry Halvorsen, who set the goal for the department late last year.

“I don’t think most people understand how hard it is to get to Windows 10 single operating system in a DoD of 4 million plus,” Halvorsen said during AFCEA’s Sep. 1 Joint Warfighter IT Day in Vienna, Virginia. “Plus actually interacting with some of our big customers that also have to be in places where we can talk seamlessly. So it’s a big audience. Will we hit that number in January? No. Is that still the goal? Yes. Are we going to be pretty close? Yes. Is it going to be really hard? Double yes, but people are committed.

Halvorsen would not comment on what specifically was holding the transition back.

The military services have been sending warning signals that they would not be able to meet the transition deadline by 2017 since March.

Back then, Army CIO Lt. Gen. Robert Ferrell said the Army will be missing Halvorsen’s goal.

“Huge challenges in [moving to Windows 10],” Ferrell said in March. “The mandate is to move to that environment within one year. We are challenged with that. We think it’s going to be a lot longer than that.”

The Army does not expect to finish its first phase of transitions in Europe until the second quarter of next year.

“In Europe now we are focused on the early adopters. I think we are testing about 13 instruments now and in [the United States] about the same. I think by… the second quarter of next year we’ll have Europe completed with the transition and then we will focus on [the United States,” Ferrell said in July.

Ferrell said the biggest challenge the Army has in rolling out Windows 10 is the service’s legacy systems and making them compatible with Windows 10.

The Army is anticipating its programs of record revolving around weapons, aviation, logistics and medical systems will be the most complicated to switch to Windows 10, the Army spokesman said.

What’s holding those systems back is that they are linked up to ensure interoperability with other systems. The systems are in use and migrating to a new operating system requires detailed planning and must not break the connectivity between systems.

One example is the Army’s mission command system that provides uninterrupted mission command using a network of capabilities. That’s a system the Army just can’t turn off to update, and if it did the other systems it relies on must continue to be compatible with it.

“Migrating to a new operating system requires detailed planning and must be accomplished in a way that ensures interoperability, and allows us to maximize the benefits of the Windows 10 [operating system], while also minimizing the impact on the programs of record,” the Army spokesman said.

Other reasons legacy systems cause a problem is programs of record have a longer planning cycle and are managed differently.

The Army still does not have a timeline as to when the legacy systems will adopt Windows 10.

“We will develop a plan of action and milestones for our programs of record that meets the objectives of the Windows 10 transition, i.e. enhanced cybersecurity, increased efficiency and commonality from using a single operating system, while also accounting for the unique requirements and life-cycle of each program,” the Army spokesman said.

The Air Force doesn’t think it will be fully upgraded until 2018.

An Aug. 22 press release from the Air Force stated it would not start its migration to Windows 10 until late 2016.

Halvorsen directed the rapid transition to Windows 10 last November. Defense Secretary Ash Carter later published an execution order with the details on the release of the Windows 10 secure host baseline.

“What the Department of Defense is looking to do is improve its security stance and to provide for more consistency throughout the agency,” Nigel Hughes, vice president of sales at SteelCloud told Federal News Radio. “This is a major undertaking. There are obviously millions of desktops throughout the Department of Defense. To move everyone to a Windows 10 platform is a significant undertaking, but it brings tremendous benefit to the department.” 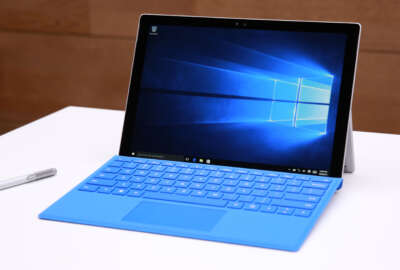