JADC2 strategy in the works, possibility for investment fund

The military will soon have an overarching, official strategy for one of its biggest joint service ventures in years.

The Joint All Domain Command and Control (JADC2) effort is meant to connect multiple domains, weapons systems and sensors to help warfighters make decisions faster. The program will help bring together multiple technologies so troops can have better awareness of their environment, call on assistance from drones or communicate complex ideas with peers by sharing files,...

The military will soon have an overarching, official strategy for one of its biggest joint service ventures in years.

The Joint All Domain Command and Control (JADC2) effort is meant to connect multiple domains, weapons systems and sensors to help warfighters make decisions faster. The program will help bring together multiple technologies so troops can have better awareness of their environment, call on assistance from drones or communicate complex ideas with peers by sharing files, maps and more.

Marine Corps Lt. Gen. Dennis Crall, the chief information officer for the Joint Staff, says the overarching strategy for JADC2 will soon be briefed to the deputy defense secretary, and then the military is hoping to have the defense secretary sign the document.

Crall said the strategy “will codify the lines of effort and our approach to delivering the capabilities required to JADC2.”

The military is creating two different strategies: one classified and the other unclassified.

“The areas that you might suspect that we have kept classified are surrounding the nuclear command, control and communications apparatus,” Crall said last week at the C4ISRNet Conference. “It’s not classified that we have a line of effort that involves nuclear. What is classified, of course, are the details surrounding that particular line of effort. The other lines of effort that we have listed are pretty open and I think the readers will be able to get the full sense of the direction JADC2 is heading, and maybe some of the delivery milestones that we’re looking to achieve.”

The military already has a JADC2 cross functional team that is working with the military services on their lines of effort. The Air Force is in charge of the Advanced Battle Management System, a network intended to provide data to pass information across all domains. The Army is working network modernization called Project Convergence to enable multidomain operations. The Navy is conducting Project Overmatch, which develops a new fleet architecture using artificial intelligence and manned/unmanned teaming.

One of the most important parts of JADC2 is adopting new technologies quickly, and then integrating them into the system.

“In the digital age, putting us on a five-year acquisition cycle for funding makes it really challenging to identify a set of capabilities or requirements,” Crall said. “We end up getting yesterday’s technology delivered tomorrow by the time those funding streams come through and you execute those contracts.”

Crall said the Defense Department is working with Congress on the possibility of an investment capital fund that would earmark money for multiple uses.

“It’s not too specific, so that allows it to be spent quickly,” he said. “We could probably move faster to retire legacy and onboard some modern things.” — SM

DoD sheds more light on how it fended off Solarwinds attack

Defense officials have already attributed the Pentagon’s apparent escape from the recent Solarwinds hack to the Joint Force Headquarters-DoD Information Networks (JFHQ-DoDIN)’s ability to order immediate action across the department’s sprawling IT enterprise whenever a serious vulnerability is found. Last week, they shed a bit more light on how that process actually worked.

Most of the department’s quick response boiled down to what Brig. Gen. Paul Fredenburgh, the joint force headquarters deputy commander, termed a “unique authority” to direct specific actions across 44 different DoD IT organizations. In the case of Solarwinds, JFHQ-DoDIN told administrators in each of those areas of operation to disconnect any systems that might be affected by the newly-disclosed vulnerability and start patching right away.

And that’s where JFHQ-DoDIN’s linkage with the Defense Information Systems Agency turned out to be extremely helpful (DISA’s director is also the commander of the joint force headquarters). Since DISA manages all 12 of DoD’s major interconnections with the public internet, it was able to quickly use those newly-developed threat indicators to watch for signs that the Russian government hackers who planted the Solarwinds vulnerability might be trying to actively make use of it.

“When you think about the cyber terrain, the forward edge of the battlefield is where the DoDIN connects with the internet,” he said. “So we were able to work with DISA and develop signatures to not only detect, but actually block adversarial activity that could have exploited this. So that partnership is absolutely critical.”

Defense officials have previously said there had been 1,500 instances of the affected Solarwinds Orion software on DoD’s networks at the time the hack was discovered. Of those, 560 were determined to have been running the Russian-created exploit, but the Pentagon says it has not been able to find any evidence that foreign adversaries or anyone else managed to leverage it against DoD. —JS

The juncture will bring together 17 different military hospitals and clinics into what DHA is calling the Tidewater market. It’s the fifth such market created by the agency since it began assuming responsibility of military treatment facilities (MTFs) from the military services.

The markets are not just the MTFs, but also a grouping of private TRICARE partners, Veterans Affairs hospitals, medical universities and other health care providers. In the market, they operate as a system to support the sharing of staff, patients, budget and other functions to better deliver and coordinate care.

“The establishment of this market provides a true opportunity to optimize health care for our beneficiaries by focusing on outcomes and access across the Tidewater market,” said Navy Rear Adm. Darin Via, Tidewater market manager. “It also allows us to work towards standardization of processes, creating an easier environment for our patients to navigate within.

Patients will be able to more easily schedule appointments across multiple facilities and meet specific demands to get more holistic care.

“Transition will have no immediate impact on patient care and will be seamless to beneficiaries,” he said. “This transformation builds on our successes on the battlefield with an eye on emerging global challenges to ensure we are ready to fight tonight.”

DHA’s four other health markets include the National Capital Region, Central North Carolina, Jacksonville and Coastal Mississippi markets, which were all established in the beginning of 2020.

This is the first market creation since the COVID-19 pandemic.

DHA is congressionally mandated to take over all of the MTFs from the services by the end of September.

DHA paused the process at the beginning of the pandemic to reassess how the private hospitals in the healthcare markets could handle demand from military families and retirees.

“The markets in some of the areas changed significantly, just like you saw in the newspaper and elsewhere, a lot of providers closed up their doors, and a lot of access went away,” Dr. Brian Lein, DHA assistant director for healthcare administration, told Federal News Network in February. “The United States lost a lot of hospitals, and hospital capability, especially in some smaller communities, where it couldn’t support those hospitals in terms of finances.”

The transition includes 721 military treatment facilities and 174,000 health care personnel, including active-duty service members, civilian employees and contractors, which provide care to 9.5 million TRICARE beneficiaries. The facilities will eventually be clustered into 21 large markets that encompass about two-thirds of patient interactions. The rest are in 16 small market regions or stand-alone hospitals and clinics — think rural areas with a large military presence.

Due to COVID the Defense Department’s health program is currently experiencing a budget deficit of nearly $700 million. That is expected to increase to $1.8 billion by the end of the year. DoD is looking internally for ways to make up that gap. — SM 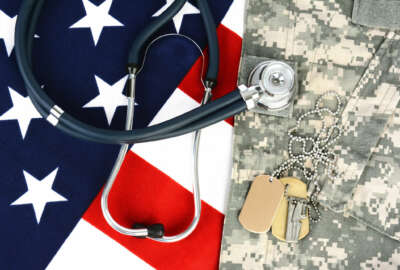