Lawmakers missed an opportunity to gain some clarity into the Environmental Protection Agency’s plans to close certain facilities during the May 16 hearing of the Interior, Environment and Related Agencies Subcommittee. Instead, the hearing largely focused on Administrator Scott Pruitt’s ethical conduct, or alleged lack thereof.

“Unfortunately, I am concerned that many of the important policy efforts that you are engaged in are being overshadowed because of a series of issues related to you and...

Lawmakers missed an opportunity to gain some clarity into the Environmental Protection Agency’s plans to close certain facilities during the May 16 hearing of the Interior, Environment and Related Agencies Subcommittee. Instead, the hearing largely focused on Administrator Scott Pruitt’s ethical conduct, or alleged lack thereof.

“Unfortunately, I am concerned that many of the important policy efforts that you are engaged in are being overshadowed because of a series of issues related to you and your management of the agency,” said subcommittee Chairwoman Lisa Murkowski (R-Alaska).

And that’s exactly what happened during the hearing. Despite recent concern over EPA plans to shutter offices in Michigan and Las Vegas, Nevada, lawmakers failed to inquire about EPA’s future plans regarding its facilities, despite the fact that the subject was directly referred to in Pruitt’s written testimony.

“This budget does not include plans to close regional offices, but we will continue to prioritize efforts that save taxpayer dollars through space consolidation and essential renovations to reduce and optimize our physical footprint,” the testimony said.

But EPA could be seeking to take advantage of ambiguous wording to continue to shutter facilities; this statement echoes language that recently provoked a difference of interpretation between EPA and lawmakers, when the 2018 omnibus spending deal blocked funding for the EPA to reorganize its workforce or consolidate regional offices.

“The agreement does not include any of the requested funds for workforce reshaping,” lawmakers wrote in their explanation of the spending bill. “Further, the Committees do not expect the Agency to consolidate or close any regional offices in fiscal year 2018.”

However, the EPA is moving ahead with plans to close agency facilities in Las Vegas, Nevada, by the end of fiscal 2018, according to Tim Watkins, the director of the National Exposure Research Laboratory.

According to agency employees affected by the closure, the EPA interprets the phrase “regional offices” in the 2018 omnibus to mean the agency cannot consolidate the 10 regional offices that serve as hubs for multiple states and U.S. territories.

But it is unclear whether lawmakers sought to protect those hubs or agency sites in individual cities.

“I see that we’re going to have to write these spending bills in the most specific words possible, because the administration seems to take them as loosely as they possible can,” said Rep. Mike Quigley (D-Ill.), the co-chair of the bipartisan Congressional Transparency Caucus.

Lawmakers did, however, take the opportunity later in the day to find out a little more about the plans for a new FBI headquarters.

Christopher Wray, FBI director, noted in his testimony that the requested budget constituted “a total decrease of $476 million, including a $318 million reduction in the FBI’s construction account funding for one-time projects.” In light of recent controversy around the changing plans for a new FBI headquarters, lawmakers wanted to know more.

“I must say, for those of us who’ve been following this process for many years, we’ve gotten whiplash when it comes to the FBI building,” Sen. Chris Van Hollen (D-Md.) said during the May 16 hearing of the Senate Appropriations Subcommittee on Commerce, Justice, Science and related agencies.

He proceeded to read from a General Services Administration report that said the J. Edgar Hoover building, FBI’s current headquarters, could not be redeveloped to provide the space or physical security required by the FBI.

One of the issues was the distance of a building from its property line, known as its setback. Van Hollen noted that other high-security facilities, such as the headquarters of the CIA and NSA, are established on campuses to provide adequate setback and added security.

Wray responded that the current plan to build an entirely new headquarters on the site of the old one would allow the FBI to reach level five security, comparable to international partners like the New Scotland Yard, while still allowing the agency to take advantage of the location.

But Van Hollen was not persuaded.

“Mr. Director, with all due respect, you’re going to have to convince me the reasons why the FBI and the GSA have rejected their earlier assessment that developing at the current site regardless of the configuration would not provide adequate security,” he said. “That’s the same reason why we have the CIA, that we have the NSA on a campus. It just doesn’t compute that larger setbacks don’t provide more security. The question would be, what kind of security would you be willing to give up?”

Sen. Shelley Moore Capito (R-W.Va.) wanted to know how the new headquarters would affect the distribution of FBI personnel, as the plan for a new headquarters has included transferring certain FBI agents and agency functions to various locations throughout the country. The FBI’s Criminal Justice Information Services Division provides a significant presence for the agency in West Virginia.

“For about a decade now, the FBI has been working on plans to move various functions and headcount out of the national capital region,” Wray said. “The new headquarters proposal that we have would still significantly expand the number of people who would be in the headquarters here, so it’s a combination of things.” 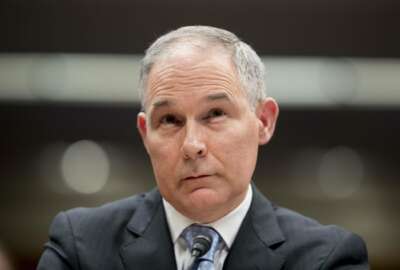