The most ambitious federal building project since the Pentagon took a major step forward Friday, as leadership from the Department of Homeland Security and General Services Administration held an opening ceremony for the Center Building, located on the St. Elizabeths campus in Southeast D.C.

Acting DHS Secretary Kevin McAleenan has worked out of his office in the Center Building, which dates back to before the Civil War, for about the past two months, along with...

The most ambitious federal building project since the Pentagon took a major step forward Friday, as leadership from the Department of Homeland Security and General Services Administration held an opening ceremony for the Center Building, located on the St. Elizabeths campus in Southeast D.C.

Acting DHS Secretary Kevin McAleenan has worked out of his office in the Center Building, which dates back to before the Civil War, for about the past two months, along with about 1,000 other DHS employees. But aside from just a change in scenery — from a facility across the street from American University to a massive campus originally built for a psychiatric hospital — the new headquarters aims to make it easier for the agency’s various components to meet and collaborate.

“It’s the first time that we’ve had a facility that’s commensurate with our mission and operations, and enables us to be effective as a team,” McAleenan said Friday at a ribbon-cutting ceremony on the St. E’s campus.

The completion date for St. E’s has been a moving target, but DHS officials have told Congress that it expects to wrap up the project by 2026. A revised third master plan for the campus was due by the end of December 2018, but Bart Bush, DHS’s senior executive for real estate, facilities, planning and asset management, said GSA is in the “final stages” of a master plan amendment to build out more than 1.3 million square feet on the campus. The original plan for St. Elizabeths calls for 4.5 million square feet of built space on the campus.

Once the latest wave of construction is complete, more than 13,00 DHS employees will work out of St. E’s.

While Congress has appropriated more than $2 billion overall for the DHS campus, the fiscal 2019 appropriations bill fell short of the agency’s request for funds to build a headquarters for the Federal Emergency Management Agency. These and previous funding shortfalls have created a domino effect for other DHS components: Immigration and Customs Enforcement should have received full funding for its headquarters in fiscal 2018, and Customs and Border Protection should’ve gotten its funding in fiscal 2019, but both of those projects have yet to move forward.

“A variety of master planning efforts over the years have caused the headquarters project to languish, along with funding for some of those new facilities there,” Bush said Monday at a meeting of the Public Buildings Reform Board.

Bush said the Center Building is about 180,000 square feet less space than their previous headquarters space. Having agency leadership mostly under one roof, he added, creates a “center of gravity” for the new campus.

The fiscal 2020 spending bill currently includes DHS’s full request for $224 million to develop a new facility for the Cybersecurity and Infrastructure Security Agency on the St. E’s campus, reducing its real estate footprint from eight different facilities down to one.

The Office of Intelligence and Analysis, the final occupant of the DHS’s old Nebraska Ave. location,  will move to the consolidated campus after CISA, will likely be funded through FY 2021 appropriations.

The combined movement of the Office of the Secretary, CISA, the Office of Intelligence and Analysis and CWMD will bring 5,600 employees to the St. E’s campus.

“As DHS consolidates components here at St. Elizabeth’s, a unified campus will bring greater efficiencies and future cost savings by continuing to eliminate leases across the region,” Murphy said. “The St. Elizabeths project is just one example of GSA delivering on our goal of saving taxpayer money through better management of public real estate.”

Despite shakeups in the project between Congress, DHS and GSA, including an overall reduction in the footprint of the campus, Rep. Eleanor Holmes Norton (D-D.C.) said the completion of the Center Building marks a major milestone for the project.

“We are not simply opening a building. We are opening the headquarters for a complex of buildings,” Norton said.

In order to get a critical mass of DHS employees out to St. E’s, GSA has proposed demolishing five historic buildings originally planned for adaptive reuse, and constructing three new facilities in order to drive the cost down to $350 per square foot.

At a National Capital Planning Commission meeting in March, GSA described an uphill battle taking steps to “mothball” some of the historic buildings when it took over the campus from the D.C. government. Kristi Tunstall Williams, director of GSA’s historic preservation and arts division, said some of the historic properties had deteriorated through time and disuse. Forensic analysis also revealed deficiencies that originated with the construction of some of the historic facilities.

“We have maintained, to the extent that we could, the historic footprint of St. Elizabeths,” Norton said.

Sen. Tom Carper (D-Del.), the ranking member of the Environment and Public Works Committee, noted that DHS as an agency came from “many disparate places” — from more than 20 agencies following the terrorist attacks on Sept. 11, 2001.

“It wasn’t an easy task, and it still isn’t, to bring all of its components together, especially when they are scattered all across the city and region. This campus at St. Elizabeths, which has been years in the making, will help to change that and finally unite this critical department,” Carper said.

This marks the second ceremonial opening of the Center Building. Former DHS Secretary Kirstjen Nielsen spent her last day on the job at the first ribbon-cutting, and stood alongside her successor McAleenan and former undersecretary for management Claire Grady. 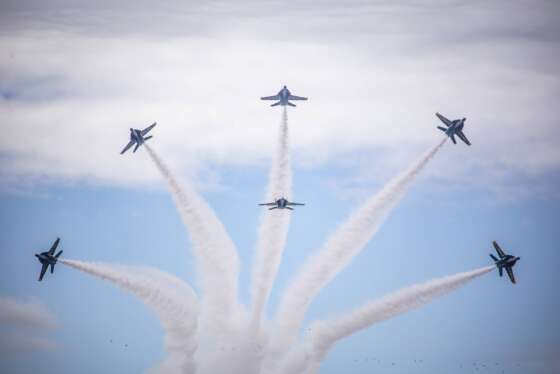