A Washington attorney has made good on her pledge to file a class action lawsuit against the federal government over the current government shutdown.

Heidi Burakiewicz, a partner at Kalijarvi, Chuzi, Newman and Fitch, filed the lawsuit Monday afternoon in the U.S. Court of Federal Claims. It seeks back pay — including overtime — and liquidated damages for exempted employees forced to work without pay.

Burakiewicz, who filed Monday’s action in conjunction with the American Federation of Government Employees (AFGE), won a similar suit for 25,000 employees in the 2013 shutdown.

Judge Patricia  Elaine Campbell-Smith, then chief judge, sided with the plaintiffs. A consultant, Burakiewicz said, is still calculating the damages — equal to twice the pay for the shutdown period. She said because of the precedent from the 2013 case, she is confident the court will again decide in favor of the plaintiffs.

At issue is whether the government is violating the Depression-era Fair Labor Practices Act. In the 2013 case, the judge ruled the government had. At the time, the Obama administration sought to have the case dismissed outright. But the court awarded liquidated, or double, damages because it was found to have knowingly violated the FLPA.

In an interview Monday, Burakiewicz said her real aim is not so much getting cash for her clients as it is forcing the government to fully reopen.

Two plaintiffs named in this afternoon’s suit are Justin Tarovisky and Grayson Sharp, both Bureau of Prisons employees and members of the AFGE union. Burakiewicz said she is particularly sensitive to BOP employees, whom, she said, are working in understaffed, dangerous situations to start with.

Burakiewicz said her law firm would be posting information on how other excepted federal  employees can join. She said she was prepared to add all of the estimated 400,000 of them, if necessary. 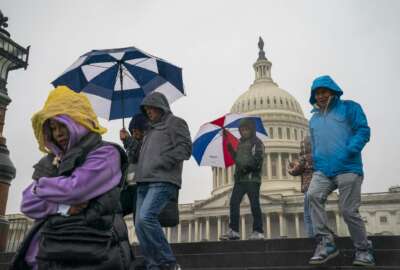 What exactly will end the shutdown?