Agencies that once struggled with long waits have brought new recruits onboard in streamlined ways during the coronavirus pandemic that will probably stick around long after agencies resume regular operations.

Meanwhile, a similar revelation could change the way agencies look at internships and getting future generations of the workforce interested in federal service.

The Virtual Student Federal Service, for more than a decade, has matched interns working remotely with unclassified projects that include coding, speech writing...

Agencies that once struggled with long waits have brought new recruits onboard in streamlined ways during the coronavirus pandemic that will probably stick around long after agencies resume regular operations.

Meanwhile, a similar revelation could change the way agencies look at internships and getting future generations of the workforce interested in federal service.

The Virtual Student Federal Service, for more than a decade, has matched interns working remotely with unclassified projects that include coding, speech writing and website design.

The State Department launched the program in 2009, after former Secretary of State Hillary Clinton spoke about the need for virtual internships in a New York University commencement speech.

The program since then has spread to more than 55 agencies, but Nora Dempsey, the State Department’s senior adviser for innovation, said the agency remains the “connective tissue” between college students and agencies in demand of their skills.

Last year, the program set up 1,200 internships for undergraduate and graduate students across the country, but with the pandemic making in-person internships a risky proposition, the State Department expects to see a higher-than-average level of interest when the application for students goes live July 1.

“The future of work is virtual, and we can all see that now’s the time to build the virtual capacity of every team,” Dempsey said.

Remote internships through the program allow agencies to recruit from a more diverse pool of applicants, and gives students the flexibility to complete projects and check-in with mentors without being in the nation’s capital.

“Students have midterms exams and breaks, and mentors have vacations, meetings and other responsibilities. And so flexibly, mentors and students work with each other to make sure they both are really satisfied with some concrete results,” Dempsey said.

Students and mentors generally meet at least once a week to catch up, review work and set deadlines.

Federal employees have until June 10 to sign up as mentors for the program. Agency program offices also have until the deadline to submit project ideas for prospective e-interns.

In each recent Foreign Service class brought into the State Department, Dempsey said at least three employees have been VSFS alumni, or about 10% of each incoming class.

Agencies such as the Department of Health and Human Services and NASA have also seen e-interns apply for jobs after graduating.

Within HHS, Dempsey said the Indian Health Service has also benefited and made students more aware of its mission.

While the federal government continues to compete with the private sector for graduates with in-demand talents, the VSFS program puts agencies in touch with students who have computer science, research and data visualization skills.

Agencies have already posted more than 300 projects on the site, and Dempsey said the State Department expects 700 projects by the deadline.

At a time when the Trump administration has urged agencies to provide a digital-first experience to the public, agencies have sought more students with creative skills, such as graphic design or videography.

The State Department has also moved online its portfolio on fellowship programs, many of which seek to increase the diversity of its workforce.

“A virtual, meaningful program was constructed to make sure those students got the benefit of what was intended to be a really great learning opportunity this summer,” Dempsey said.

While the State Department has a long track record with remote internships, the agency has also helped bring other agencies up to speed with the concept.

Prior to the interview, Dempsey had spoken with officials from the Government Accountability Office on how to save its internship program and building a virtual program that is “meaningful for both sides of the equation.

“No one wants to give up student internships, and there’s a concerted effort across government now, to make sure that we learn how together to make sure that they happen virtually if they can’t happen in person,” she said. 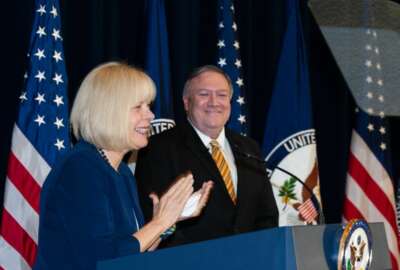