Hiring and onboarding employees during the coronavirus pandemic has been a trial by fire for the human resources world. The challenges begin with the application process and continue as new workers become integrated within their teams.

Speaking as part of Washington Technology’s Virtual Power Breakfast panel Friday, representatives of federal contractors shared how their companies shifted to a new paradigm of virtual onboarding. And some of those practices are not expected to go away.

“I think virtual hiring fairs are here to stay,” said Janet Hanofee, chief human resources officer for SOS International, an aerospace, defense and government services tech integrator. “And, knowing that we’re looking forward to the future that the types of technology skills that we’re going to look for and leverage are expanding the demand for individuals that have backgrounds in AI machine learning automation — we see that as being in a greater demand now going forward.”

However, when the company needed to replace an executive role which required a certain set of soft skills, Hanofee said virtual one-on-one interviews were the way to go.

Debbie Rhodes, vice president of Human Resources for CGI Federal, said it was crucial to make sure hiring managers were comfortable with virtual onboarding and interviewing. But the pandemic has not slowed hiring, and she said the company’s campus recruitment program for college interns is comparable to last year. More than 50 interns were onboarded in the past week and about 300 college hires were brought in this year so far.

All panelists agreed that once new hires began, establishing a personal connection and instilling company culture was important despite teleworking. Rebecca Kenawell, vice president of Human Capital at Maximus, said that called for using more video in conference calls rather than audio-only.

“And so for us, we’ve really tried to make a push that when you’re on a conference call, you turn your camera on. You don’t have to be camera ready, everybody’s okay with that. But just being able to see each other to make eye contact to pick up on some of the nonverbal cues,  I think that’s really helped folks continue to either make new connections or continue to build upon the relationships that they have with folks,” she said.

Maximus also launched an app that aggregates and pushed all organization communications to smartphones for better visibility. They also established a texting alert system for people forced to quarantine to check how they are faring, Kenawell said.

All three companies are undergoing phased returns to the office, the panelists said.

Hanofee said about 25% of the corporate office staff elected to return, and to reduce anxiety for others they developed a communication campaign to show what precautions were taken. Doors can be opened with foot pedals and a badge scan, the kitchen has a touchless thermometer that can tell if someone’s temperature is elevated before they enter, and a 100% air makeup filtration system was installed.

“We invested quite a bit to make sure everybody felt safe,” she said.

At Maximus, about half of its staff remained in the office and for the other half, Kenawell said the company is allowing workers to be remote through the end of September — although that timeframe is not set in stone — unless a client requires them to return sooner.

At CGI Federal, Rhodes said most employees who have needed to return to customer sites were given necessary equipment. But at the corporate office workers are advised to work at home if able.

“We have started, obviously, to prepare guidance and the buildings for the return, but we haven’t come out and said everyone needs to be back or 50% need to be back by a certain date,” she said. “We have to be light on our feet. And so it is a little bit of an ever changing environment to some degree.”

In the meantime, employee wellness services and practices have been crucial, and some said more popular than expected. Hanoffee said SOS International is making use of recruiting help to assist employees’ unemployed relatives find work. Virtual sessions for managing stress and leadership, and mental health webinars were in demand. Rhodes added that, for managers to maintain engagement with their teams, virtual jeopardy or trivia games were a help.

Support services were especially popular for staff trying to balance work and watching over children stuck at home. Kenawell said Maximus provided weekly STEM activities for children, while Hanoffee said SOS International contracted a virtual puppet show for kids so that parents could have a break. She added that the company is looking for a vendor partner to get laptops for children.

“We just reminded everyone to give each other grace and so sometimes you would see a child walking through the background of a conference call or you have a dog barking,” Rhodes said. “And so that’s just an element of empathy that was pretty critical during this time and still quite frankly is, because a lot of us are still in a virtual environment and working from home.” 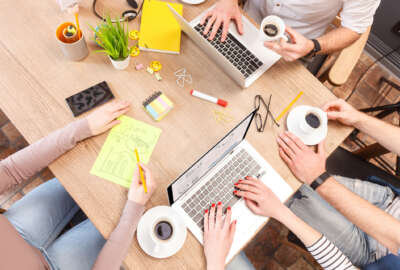