Agencies faced with mandatory telework received tens of billions of dollars from Congress in the CARES Act to scale up telework, and those that made IT modernization a top priority in recent years have seen those projects pay dividends.

But agency IT shops preparing the federal workforce for long-term telework have done more than just give employees laptops and increase network capacity. In some cases, they’ve had to build up a culture of telework in...

Agencies faced with mandatory telework received tens of billions of dollars from Congress in the CARES Act to scale up telework, and those that made IT modernization a top priority in recent years have seen those projects pay dividends.

But agency IT shops preparing the federal workforce for long-term telework have done more than just give employees laptops and increase network capacity. In some cases, they’ve had to build up a culture of telework in places where employees didn’t work from home often.

The Department of Homeland Security, for example, stood up remote access capabilities years ago to ensure continuity of operations, but the agency has had to overcome cultural barriers to telework during the pandemic.

Kevin Graber, the Secret Service’s chief information security officer, said officials were skeptical of a major investment in cloud before the pandemic, citing the risk of “expanding the attack surface” for cyber threats.

But given current circumstances, he said the agency shifted its position and brought its workforce up to speed on using cloud-enabled collaboration tools to stay connected.

“Since the pandemic has happened, the Secret Service very quickly realized that the risk of not being able to communicate and not being able to leverage these environments is much higher than actually embracing it,” Graber said last week in a virtual panel hosted by AFCEA Bethesda.

While the Secret Service had some videoconferencing capabilities before the pandemic, Graber said the agency only “mildly supported” those capabilities.

“It really forced us into saying, ‘OK, we need to leverage some sort of cloud-based solutions so that we can actually start to collaborate, we can actually begin to continue our jobs in this social distance, pandemic-type scenario,” he said.

Meanwhile, the Nuclear Regulatory Commission has taken steps toward IT modernization over the past few years, with a focus on automation and natural language processing.

But for all these robust modernization projects, NRC Chief Information Officer David Nelson said investments in the “basics,” such as collaboration tools and a move to the cloud, have made the biggest difference during the pandemic.

Familiarizing the workforce with work-from-home capabilities brought up another set of challenges, however. Before the pandemic, Nelson estimated that only 30% of NRC employees took advantage of the agency’s telework policy.

To bring everyone up to speed with telework training, Nelson said his office gave training and coaching to employees and made sure they had everything they need up and running.

The week before mandatory telework went into effect, Nelson recalled employees waiting in a 100-yard line waiting for training.

“The technology adoption occurred overnight, or at least over a weekend,” Nelson said. ”That was really, really important. First, that they were able to access things in ways that they had never done so before. And soon, they realized they were in a place where they were operating in a virtual environment. There wasn’t a lot of paper going around the office at the time. And at that point, I think there was a lot more focus on some of the other tools that we had out there.”

Moving to a virtual, paperless workplace helped ease employees into exploring some of the agency’s other modernization work in robotic process automation. But while NRC has stood up these platforms to keep employees productive, Nelson said not seeing employees in the office still has some drawbacks.

“Not being around people and not walking down the hall, not seeing people at the watercooler or the coffee pot, you just aren’t as in touch, you don’t get the little pieces of what’s happening in people’s lives— how they feel about work, and that’s truly important for an agency like ours,” Nelson said.

In order to make up for those water-cooler moments, Nelson said his office has held “touch-base meetings” about once a week or every other week. During these meetings, employees can tell the CIO’s office about work processes that aren’t working for them while teleworking.

Employees, for example, were used to printing documents when working in the office, but couldn’t print at home for security reasons.

“There certainly was a huge demand for digital signatures, there was certainly a huge demand for e-concurrence and that kind of stuff. Our platforms were there, and we support the training and support people using the tools, but there’s still that resistance,” Nelson said.

But hearing these challenges from employees, Nelson said the agency has made small adjustments that have had a big impact on employees’ comfortability working from home. NRC employees who complained about not being able to print, for example, received extra monitors to help them view documents.

While Congress gave agencies nearly $46 billion to scale up telework capacity and other IT investments, Health and Human Services Department CIO Jose Arrieta said agency IT offices are used to having a “very tough, uphill battle” with their chief financial officer when it comes to IT modernization.

But that value proposition carries weight when IT improvements help the agency carry out its mission during the pandemic.

At HHS, officials have worked with Palantir to create a coronavirus data collection platform called HHS Protect, which pulls together more than 200 datasets from about 8,000 hospitals to create a common operating picture of the spread, impact and behavior of the virus.

“The empowerment of the technology community, as it relates to how we invest, is very important, because from a business perspective, we’re the ones that are facilitating and driving the actual business outcomes,” Arrieta said. 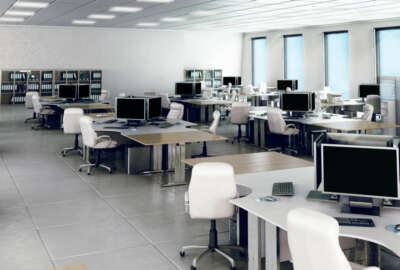