Diversity and inclusion – the term typically conjures up images of various races, ethnicities, and even gender IDs, and making sure everyone gets even handed treatment. There’s another dimension to diversity though, namely neuro diversity. Lots of people on the autism spectrum are capable of good and useful work, and that’s the idea behind the...

Diversity and inclusion – the term typically conjures up images of various races, ethnicities, and even gender IDs, and making sure everyone gets even handed treatment. There’s another dimension to diversity though, namely neuro diversity. Lots of people on the autism spectrum are capable of good and useful work, and that’s the idea behind the pilot project at the National Geospatial-Intelligence Agency. For details, Federal Drive with Tom Temin turned to the Deputy Director for Strategic Transformation in the NGA’s analysis and tradecraft technology shop, Michael Hales.

Tom Temin: Mr. Hales, good to have you on even though you have a really long title.

Michael Hales: Thanks a lot. It’s good to be here.

Tom Temin: All right. So you have a neuro diversity pilot, tell us what you’re doing here.

Michael Hales: Sure, this effort is really part of NGA’s existing program for persons with disabilities. And we’re looking at this pilot to better understand the needs of folks on the autism spectrum. We have people in our agency who are on the autism spectrum, and so we want to be able to better support them. And at the same time, we recognize that people with autism have unique talents and gifts that they can bring to our agency. And we’re always interested in hiring the best talent.

Tom Temin: I think sometimes people don’t realize that those with autism often have very high intelligence and capabilities, but they’re just wired a little bit different than other people. Is that what you’re finding?

Michael Hales: Absolutely. According to folks that we’re talking with in our building, and even other managers that we’re talking to in the intelligence community, we can see that people with autism can gather details quickly. Some identify relationships in data and information really fast and may even see patterns that neurotypical people don’t see. Others have ability to do amazing recall with information and data or can structure analysis and creative ways. Many are able to focus really intently on a problem without getting distracted. So there’s a lot of value that we’re exploring.

Tom Temin: Sure, yes, we had a neighbor with an autistic son, and he could memorize entire Broadway musicals and recite them word for word amazing, plus a really nice kid. And so what does the pilot bring to this, you say you have people already working there that are on the autistic spectrum? What is the pilot doing that’s bringing more to this?

Michael Hales: The pilot is just raising our awareness. So what kind of training needs to happen with managers with peers to be more inclusive of folks with disabilities that they may or may not know about. Normalizing what works in our hiring process is a big focus so perhaps special accommodations and interviews, you know, understanding what differences in our security procedures may need to take place. I mentioned already training for supervisors and peers. And one thing that we’re doing is matching folks on our pilot with buddies and mentors that just helped them onboard and understand the processes of working for the U.S. government.

Tom Temin: Sure. And for those people that are supervisors or hiring managers, what are some of the special I guess signposts that they need to be aware of, so that they can evaluate people fairly, and also in a way that would match the candidate that might have autism with the best type of work to take advantage of the talents they have?

Michael Hales: Yeah, the matching is partly based on their interest in what they want to do. And it’s obviously partly based on our need for the mission. And so that’s something that we’re trying to make sure we can be more aware of. And then, you know, as you said, we’re working to learn some of the aspects of the question you asked in the pilot. So this pilot is much of a learning opportunity for us to strengthen our people with disabilities program, and make it even more inclusive. So we really are just at the beginning of the pilot. It’s gonna go for five or six months, and we hope to have a lot of lessons from that.

Tom Temin: We’re speaking with Michael Hales. He’s deputy director for Strategic Transformation in the analysis and tradecraft technology shop at the National Geospatial-Intelligence Agency. And the other implicit, I guess, assumption here is that in many cases, people that might have learning disabilities or mental challenges often can get work in federal agencies, but it might be low-level tasks – delivering, sorting mail, or that kind of thing. You’re saying that there are people with autism that can do very high-level tasks in the science and technology tradecraft that you do there, pursuant to the direct mission. Tell us more about that.

Michael Hales: Yeah, we envision that people who are neuro diverse or have autism can work in almost any job in our organization, depending on the skills and abilities they bring. We’re a data driven agency and so we have lots of analysts. And we also have lots of people that support our mission in a variety of ways. We know that people with autism can bring a different way of thinking and looking at problems, you know, and as we continue to apply technology and tradecraft to hard problems, we also have to consider new ways of thinking about them and teammates with autism can think you know, in a very linear fashion that allows them to examine each step of a process to see where things might be missing or where they could be improved and others maybe have a gift of seeing a bigger picture, which brings value as well. So we just want to hire people that bring all these perspectives to our mission. So we can continue to provide world class support to our customers.

Tom Temin: And how does this backup into the hiring pipeline, because candidates have to be available in the first place that could be this type of human raw material that you need. And they also might have had to come through the educational system and the college system, which may, for whatever reasons mitigate against people with autism getting through despite the intelligence and talent they have. So are you looking upstream at how you can maybe increase the field so that more people like this can come in?

Michael Hales: Yeah, I mean, we have certain position requirements that – certain boxes that have to be checked – but what we’re really trying to do is just normalize the hiring and leveling the playing field for people with autism, as part of our people-with-disabilities program. And normalizing this hiring in that program will meet that need that you said.

Tom Temin: And do you envision some interagency sharing of the learnings that you’re going to get from this pilot program?

Michael Hales: We’re already doing some of that. There’s other agencies in the intelligence community that we’re talking to, there’s more that we’re trying to talk to and make these connections. Some of the ability to do that was hampered by COVID. But we’re part of a network and other agencies are very interested in what we’re doing and what we’re learning because they have similar ideas, and we’re kind of paving the way.

Tom Temin: And just out of curiosity, if someone is applying for a job or a position or maybe moving up the ladder, how do you know that someone is autistic? I mean, people don’t walk around with a letter A on them, thank God. But do they self identify? Or what’s the mechanism to know who it is you’re dealing with?

Michael Hales: Some have self identified, most probably don’t, just because of a stigma that’s associated with that. We’re trying to create the most inclusive environment in NGA and raise the awareness, as I said earlier, with peers and managers. To be truly successful if somebody needs to have a special accommodation or a buddy and mentor or just bring their most authentic selves to work each day we want to create that environment so more raise their hand so that they can thrive in their careers.

Tom Temin: Michael Hales is deputy director for strategic transformation in the analysis and tradecraft technology shop at the NGA. Thanks so much for joining me.

Tom Temin: We’ll post this interview along with a link to more about the program at FederalNewsNetwork.com/FederalDrive Hear the Federal Drive on your schedule. Subscribe at Apple Podcasts or wherever you get your shows. 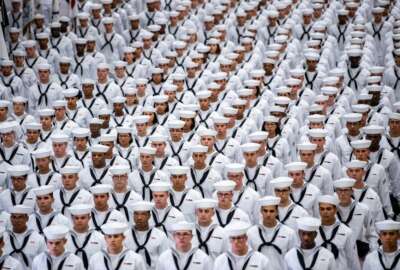