“What we are seeing is agency-hopping, based on where employees see the level of flexibility. We don’t have agencies having to compete with each other for different employees within the federal government,” Ahuja said Thursday.

Subcommittee Republicans, however, reject the administration’s plans to expand telework across the federal workforce, citing several major backlogs across public-facing government services as evidence that feds working from home aren’t meeting the needs of their constituents.

“There has been no assessment of how telework impacts agency performance,” Subcommittee Ranking Member Jody Hice (R-Ga.) said. “Why would we make something permanent that we haven’t even checked into as to its effectiveness?”

Several Republicans pointed to President Joe Biden’s commitment in his State of the Union Address to bring the “vast majority” of the federal workforce back to the office before the end of April as a promise that has not yet been met.

“Contrary to the president’s statement, agencies within the federal government continue to prolong telework policies that have resulted in bureaucratic paperwork nightmares, including a three-year tax-processing pileup at the IRS,” Rep. Fred Keller (R-Pa.) said.

Ahuja said more than 50% of the federal workforce has reported to the office since the start of the COVID-19 pandemic, and that only a “subset” of employees have taken advantage of telework.

The bill, introduced by Connolly and committee member Rep. John Sarbanes (D-Md.) would require OPM to develop standards for the collection and use of federal agency data to expand telework.

The bill would also require agencies to report to OPM every year on their goals and priorities to expand telework access to their employees.

The legislation would build on many of the goals of the Telework Enhancement Act that Congress passed more than a decade ago.

“Throughout the pandemic, agencies embraced telework and remote working arrangements. And it worked. Agencies delivered critical services across the country,” Connolly said.

Jason Miller, the Office of Management and Budget’s deputy director for management, said the past two years have shown some of the highest levels of federal employee engagement for a long time.

“We’ve seen a sustained employee engagement level across the federal workforce, showing their resilience, showing their ability to adjust to working arrangements across agencies,” Miller said.

However, federal employee engagement is still generally lower than in the private sector.

The 2021 Best Places to Work in the Federal Government results, based on data from the Federal Employee Viewpoint Survey, showed the largest year-over-year decline in satisfaction scores, based in part on federal employees being required to return to the office for at least part of the workweek.

Miller pointed to a governmentwide pulse survey as a first-of-its-kind series of data snapshots that demonstrated, at a more granular level, that federal employees rated telework favorably, and said they were more productive working from home.

“We do have some agencies — large, medium and small — that are outperforming the private sector. But on average, we’re underperforming,” Miller said.

Ahuja said telework is a valuable tool to recruit talent outside major metropolitan areas. About 80% of federal jobs, she added, are outside the D.C. metro area.

“This is an area that the federal government needs more talent in-house, given the transformation that is underway,” Ahuja said.

Ahuja said USAJobs has been updated to allow federal agencies to label whether positions are available for remote work.

“We see this as a great opportunity, again, to expand the applicant pool, to give agencies a much broader breadth of who they’re bringing into the federal government,” Ahuja said.

Republicans on the committee pointed to backlogs at the Department of Veterans Affairs, IRS, Social Security Administration, National Archives and Records Administration and OPM as an indication that the public isn’t getting access to government services.

“We continue still hearing from our constituents. And the fact is that many of them could not get services from agencies like the VA or Social Security, because no one was in the office. This is inexcusable. Again, we here to serve the public, not the other way around,” Hice said.

OPM’s backlog of unprocessed retirement claims hit a high of 35,424 claims in February. However, Ahuja said OPM remains under-resourced after the Trump administration planned to merge the agency with the General Services Administration.

“We were underfunded. We don’t have the staff in order to manage now a surge in retirement. We appreciate the budgets that we’ve received over the past couple of years and we’ll work with all of you to ensure that we have the staffing,” Ahuja said.

The House last week passed the Access for Veterans to Records Act, which would give the National Archives and Records Administration $60 million to address a backlog of veterans’ requests for military records at the National Personnel Records Center in St. Louis.

The NPRC has reduced the backlog to 515,000 veterans’ records requests, down from a peak of 603,000 in March 2022. Only a small fraction of the records are digitized, and much of the paper-based work stopped in the early stages of the pandemic.

Ahuja and Miller also pointed to telework, combined with other recent administration policies like ensuring federal internships are paid, will help recruit the next generation of employees.

Roughly 7% of federal employees are under the age of 30, compared to 23% in the private sector.

Ahuja said OPM doesn’t track overall how many interns take on full-time jobs in the federal workforce, although it does have some metrics for interns in its Pathways program.

“This seems like a very fixable problem, but it requires political will to systematize, in order to utilize internships as a tool, a portal for recruitment into the federal government,” Connolly said. 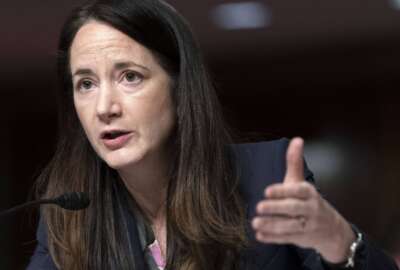