The Office of Personnel Management is making big plans to pivot its main website to focus more on its usefulness from the user perspective.

To accomplish that feat, it will require a nearly complete overhaul of how OPM.gov is currently organized.

The Office of Personnel Management is making big plans to pivot its main website to focus more on its usefulness from the user perspective.

To accomplish that feat, it will require a nearly complete overhaul of how OPM.gov is currently organized.

“[Currently], it’s really set up like a legacy government website, in that it’s structured around the actual organization and offices of OPM as an agency, versus what somebody would want to look for,” OPM Chief Information Officer Guy Cavallo said in an interview with Federal News Network.

In its current form, the breakdown of the website by agency department means that those unfamiliar with OPM’s office structure would find it difficult to navigate to get the answer they want.

“For example, maybe you … want to consider working for the federal government, and you think you could go to OPM.gov and easily see what the what the hiring process is. You’d have to know which OPM office is the one that does hiring to be able to find it,” Cavallo said.

Instead, OPM’s CIO team intends to restructure the agency’s webpages to categorize information in a way that makes it easier for users to find answers to specific questions, based on the type of question rather than the specific department. That includes streamlining information for all types of visitors — both current federal employees and federal retirees, as well as those interested in applying for a federal job for the first time.

The new website will be built on several core functions, including helping users more easily and quickly access information. The goal is for website visitors to get answers to their questions related to pay, benefits, retirement, employment and much more, within just a few clicks.

“Right now, you would have to hop to multiple OPM program offices to get that information. When we do this, it’s going to be much more based around common customer experiences than just OPM’s core structure,” Cavallo said.

For the technology piece, much of the effort will be in moving the backend system to a cloud-based system. Currently, OPM’s website is hosted at a data center, which limits the flexibility of how much OPM can functionally change on the platform. It also causes issues recovering from any potential surges or crashes. Comparatively, all of the work to recover from surges would be automatic on a cloud-hosted website.

“That’ll be under the hood, and people won’t realize it, but from an OPM standpoint, it’s going to give us a much more resilient and elastic website to be able to deal with the future,” Cavallo said.

From a content perspective, the CIO office’s work will largely aim to align the agency’s website with the executive order on improving federal services and customer experience.

“We already are building user stories on [topics such as], ‘I’m a current federal employee, and I want to look at my benefit, so I want to look at what changes if I move to another agency,’” Cavallo said. “There will be a very clear path [for] current federal employees … to look for things that impact [them]. Then we also have federal retirees that … are looking for very specific benefit information, not necessarily looking for a new federal job. But again, we want to take them on that path.”

As for the timeline, Cavallo said a lot of the changes will be gradual, and in the meantime, OPM is making updates to the legacy website to try to make the information as helpful as possible. They’ll keep updating the legacy website until they’re fully ready to switch over to the new site.

“We’re trying to improve those customer experiences today, as much as we can. But until there’s really a complete restructuring, we can only take that so far,” Cavallo said.

Nothing is for certain, but the redo is likely to be complete in the next 18 months to two years. A lot of it hinges on the agency’s funding, Cavallo said, but now that Congress has passed the federal appropriations omnibus, the agency can start awarding new contracts and ramp up the changes.

Aside from overhauling its main website, OPM is also planning to make more updates to its retirement services. It’s the area of the agency that encompasses the most legacy — or outdated — technology in all of OPM, Cavallo said.

There have already been a couple of recent changes to the agency’s retirement services, including creating a cloud-based call center a few months ago, so retirees who are looking for help don’t see their calls dropped.

“Right now, when somebody decides to retire, they turn in paperwork to their own agency, and it gets processed there before it comes over to OPM,” Cavallo said. “That could take weeks or even months before it gets to OPM, but they think that OPM already has it.”

In addition to building the online retirement application, Cavallo said his team is also working to create an online retirement calculator to help federal employees more easily understand when they’ll be eligible to retire. It’s something that has become more complicated for feds to decipher over time, as many employees now spend the course of their careers working at several different agencies, sometimes even on different pay systems within the federal government.

And there might be even bigger changes ahead for retirement services, too, namely by moving the entire application to a cloud-based system.

“Most of the retirement services applications are currently on an on-premise mainframe. We are doing a study right now on what it will take to move that all to the cloud,” Cavallo said.

Cavallo said modernizing retirement services is one of his top priorities at OPM. Despite it being a significant undertaking to move a massive legacy system to cloud-based services, it doesn’t necessarily mean the agency needs a big workforce to accomplish it.

“This is my third agency that I’ve been able to lead a cloud effort. And each time, I found I’ve been able to do it with a very small team. It doesn’t take an army. It just takes a desire and rolling up the sleeves to do it,” Cavallo said. “My advice to other agencies that are holding off on moving to the cloud, is that the cloud is now 18 years old. How much longer are you going to wait?” 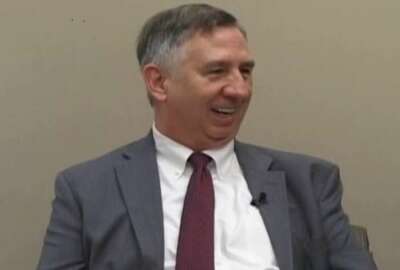 With new CIO in place, OPM turning to familiar IT modernization playbook

OPM’s changing cybersecurity posture: From protecting the perimeter to protecting it all